My main motivation for doing so was the fact that there were holes in the wall at the top of the stairs, presumably from people moving furniture not very carefully: 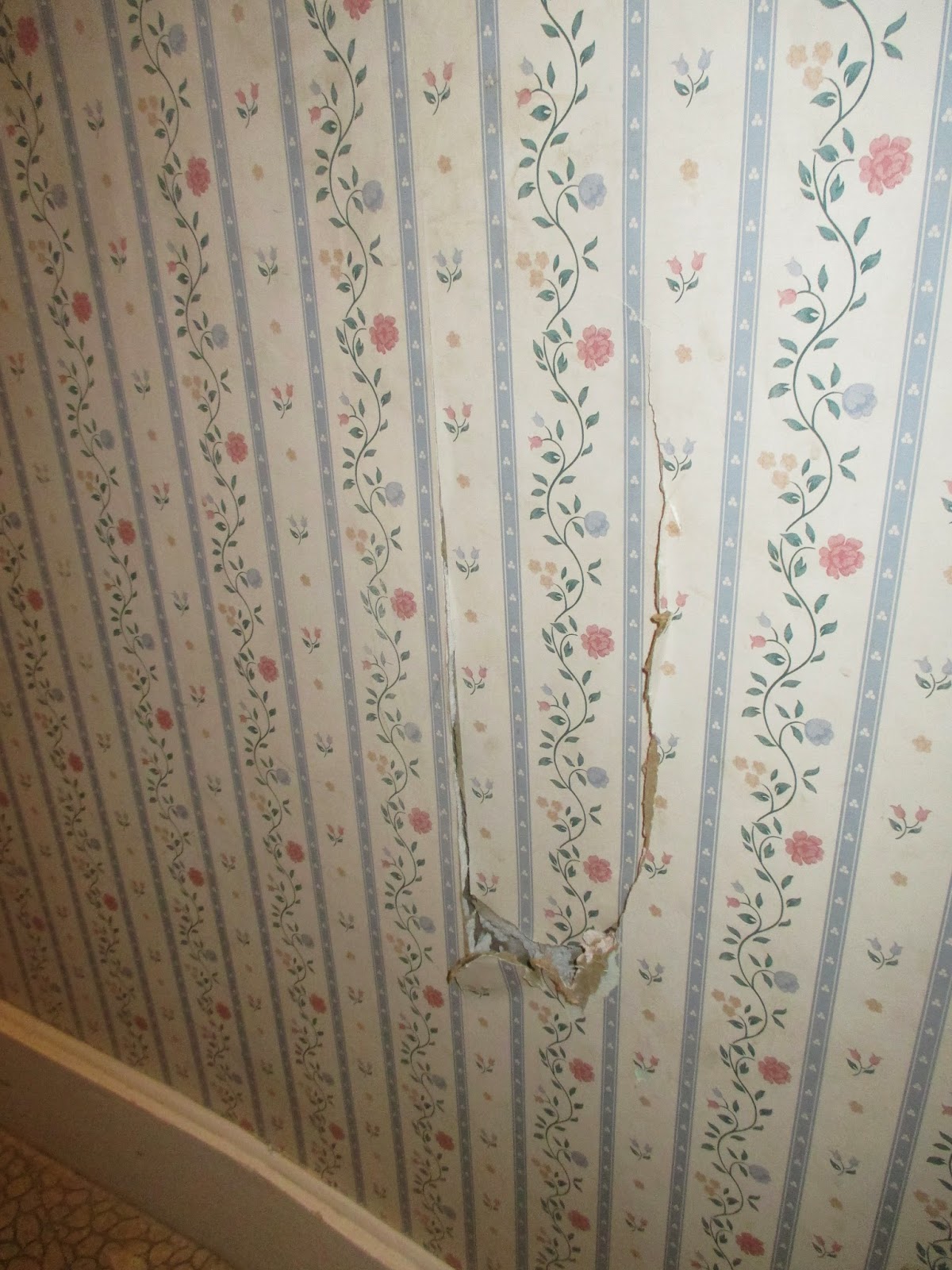 There were two of them, this being the larger one.  Instead of going through all the work of cutting out the pieces of sheet rock and replacing it, taping it, mudding it and sanding it, we found mesh repair thingys at Home Cheapo: 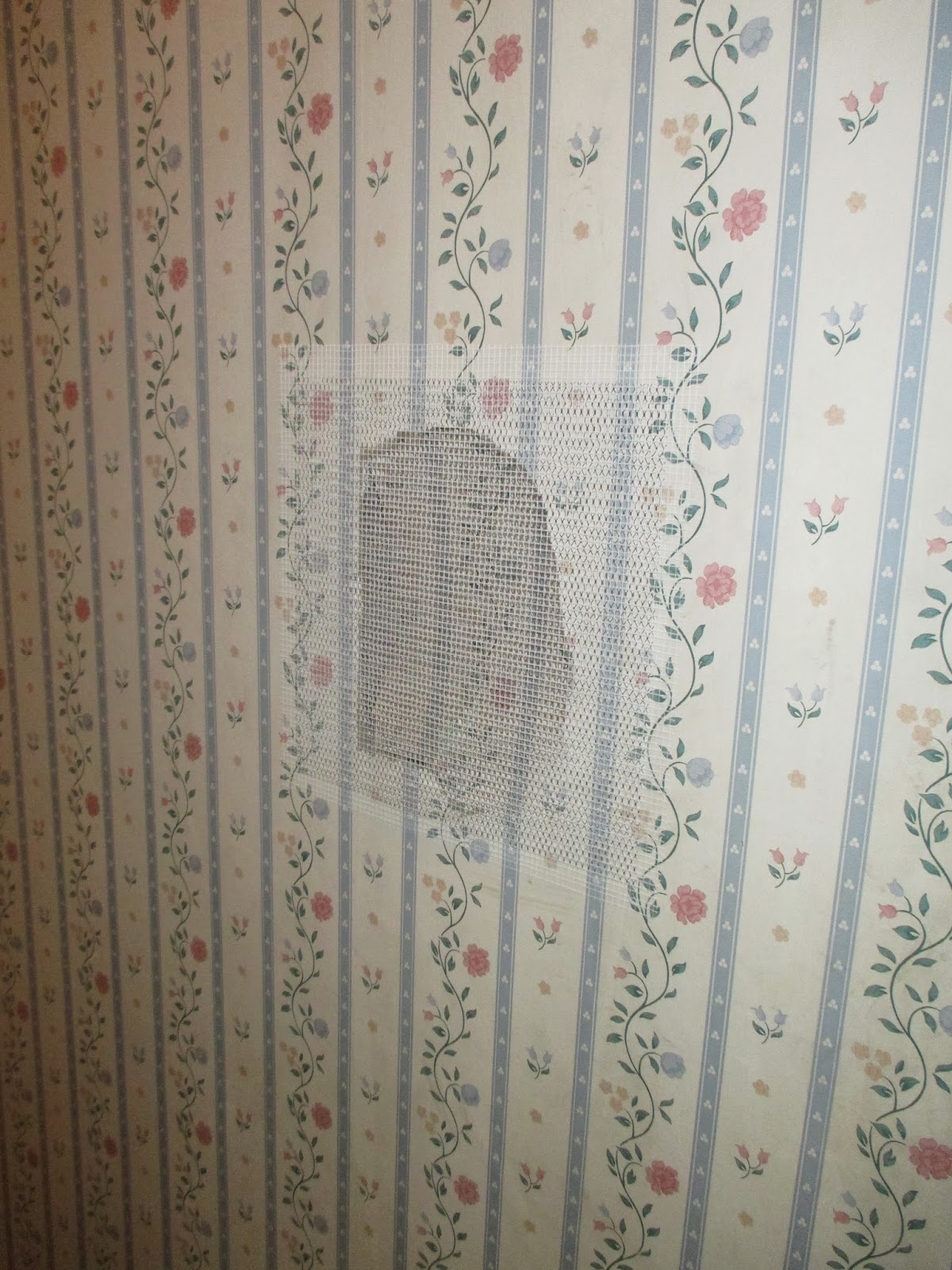 You still have to mud it and sand it, but it's much easier.  The bigger hole was a bit too big for this method, and I ended out with a "divot" on that wall.

I also had to repair the little bit of wall between our bedroom and my craft room. When I pulled the broken sheet rock away, I saw that the original corner went way deep in. 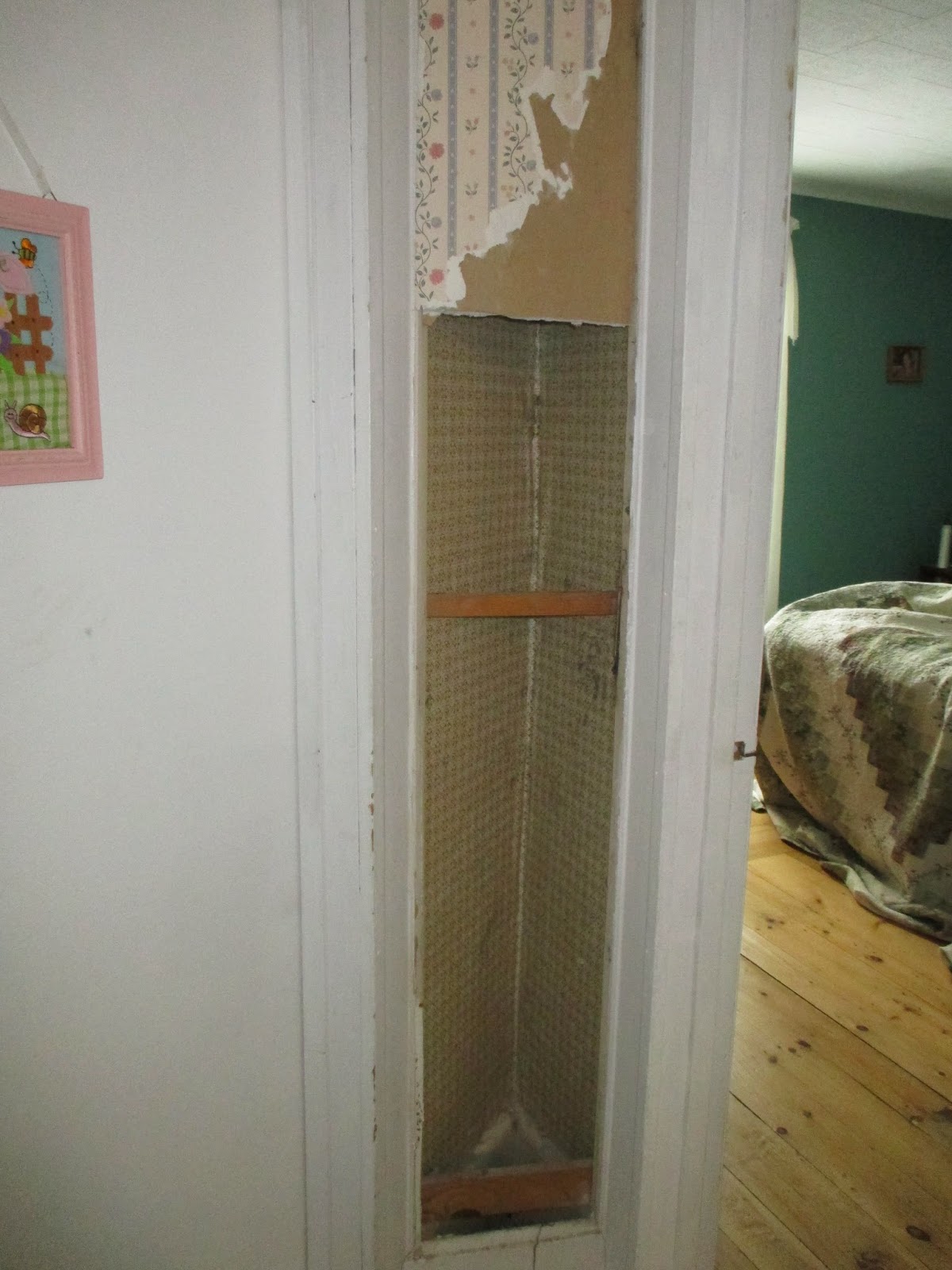 I thought about taking the sheet rock right off and leaving it with the deep corner, then decided there was no need to do that, so I repaired it. 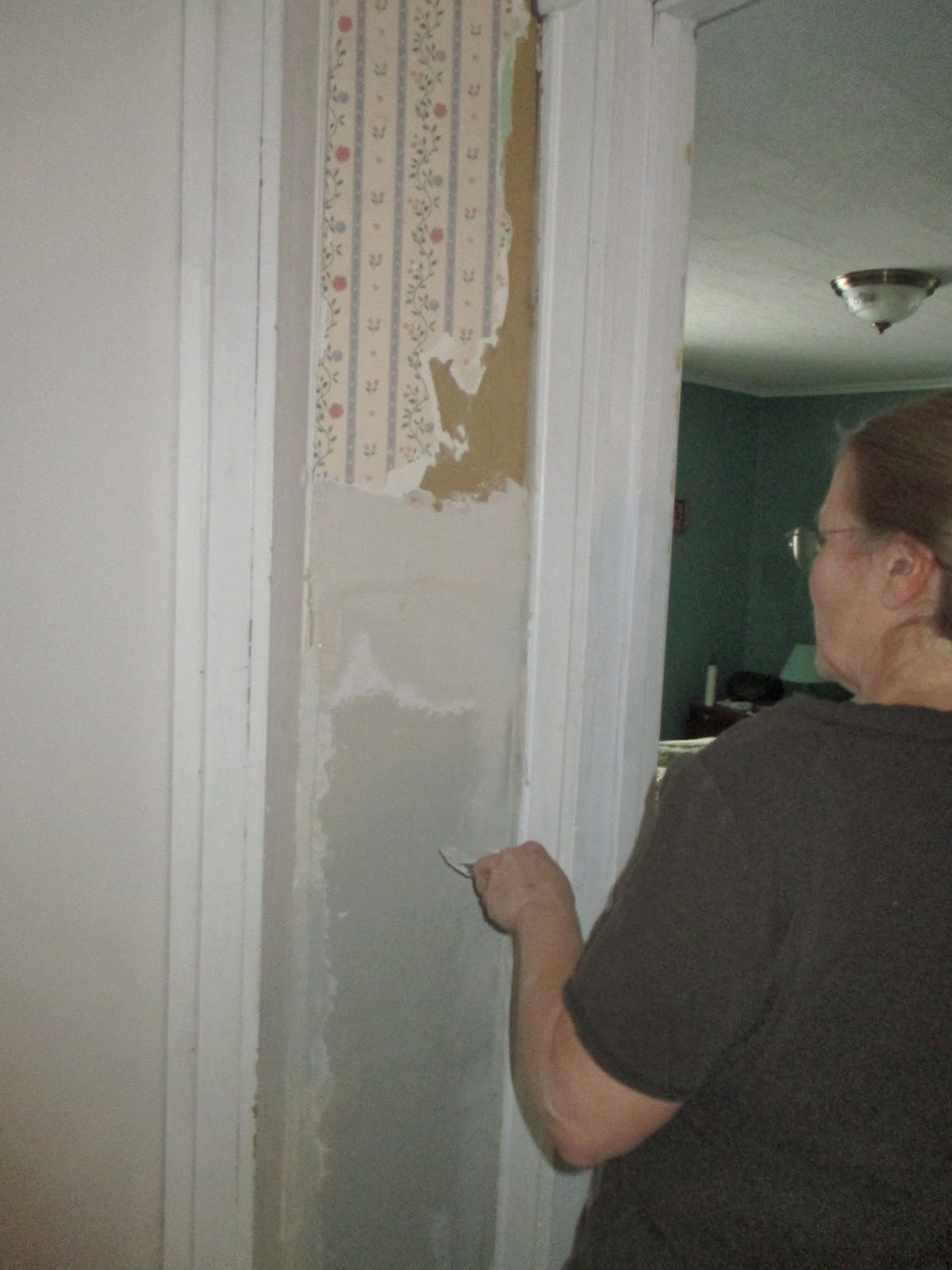 Then the big question was whether to pull down the wallpaper or paint over it.  I tried pulling down some paper, but there was a coating of paint underneath that came off along with the paper, as well as some of the covering on the sheet rock. 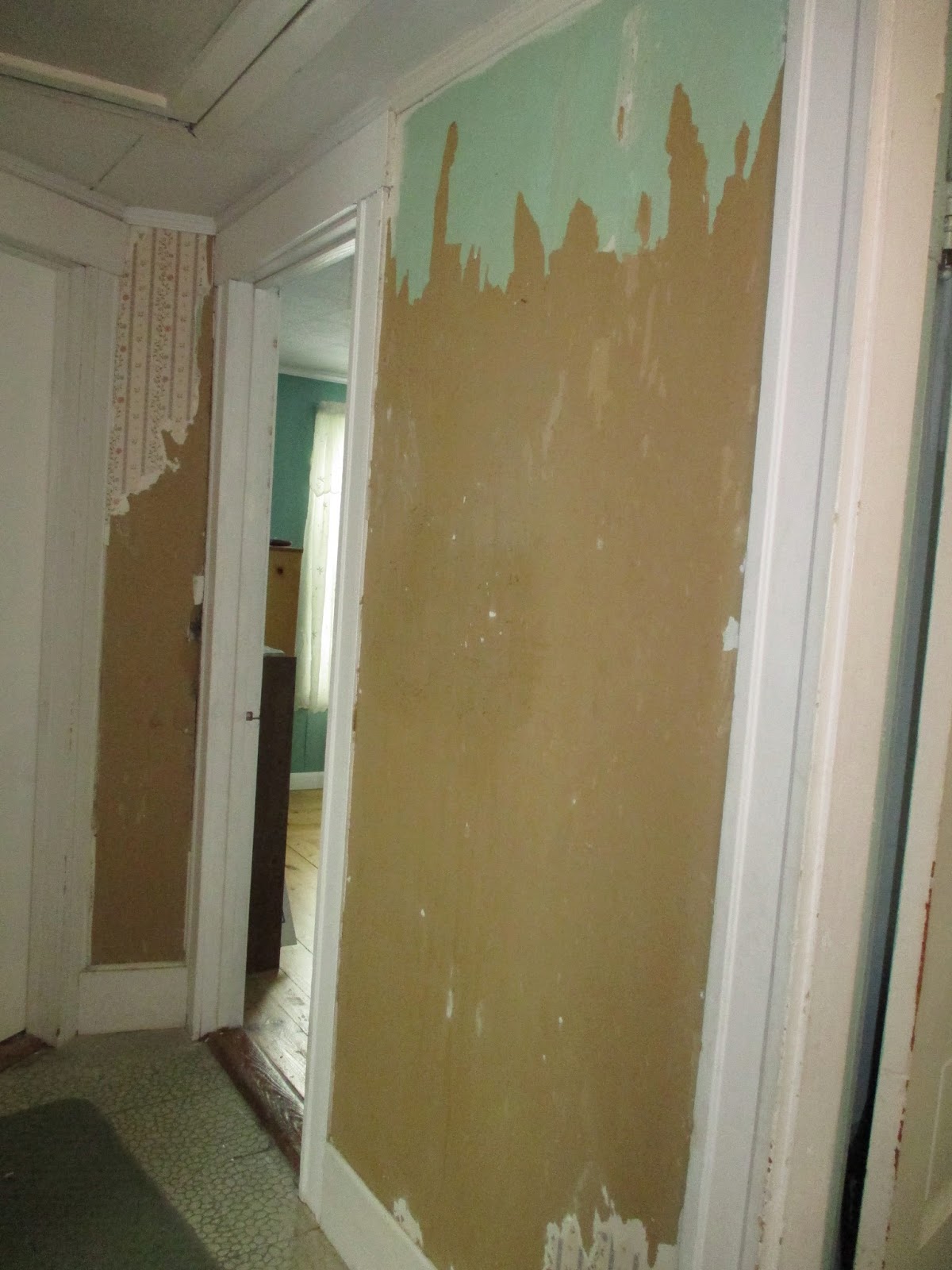 Not very pretty, and I was going to have to do a "skim coat" of mud over the whole wall to cover all the mess.  I decided to go a different route and try something I'd never done before.  Texture paint.

I read online that if the paint is water-based, it could moisten the wallpaper and make bubbles, etc.  So I painted over the wall paper with Kilz first.   Then I spent one day when I was home "sick" painting all the woodwork and the ceiling..........two coats!

Finally I did two coats of texture paint.  It wasn't nearly as hard as I thought it would be and it came out pretty nice.  It covers a lot of the sins!

In deciding a paint color, I was going to go with a gray/blue color thinking I would get a flooring that looked like slate.  But the flooring I wanted only had wood tones, so I decided to go with orange.  (I'd read that orange was a good color for an entryway because it's warm and inviting.) 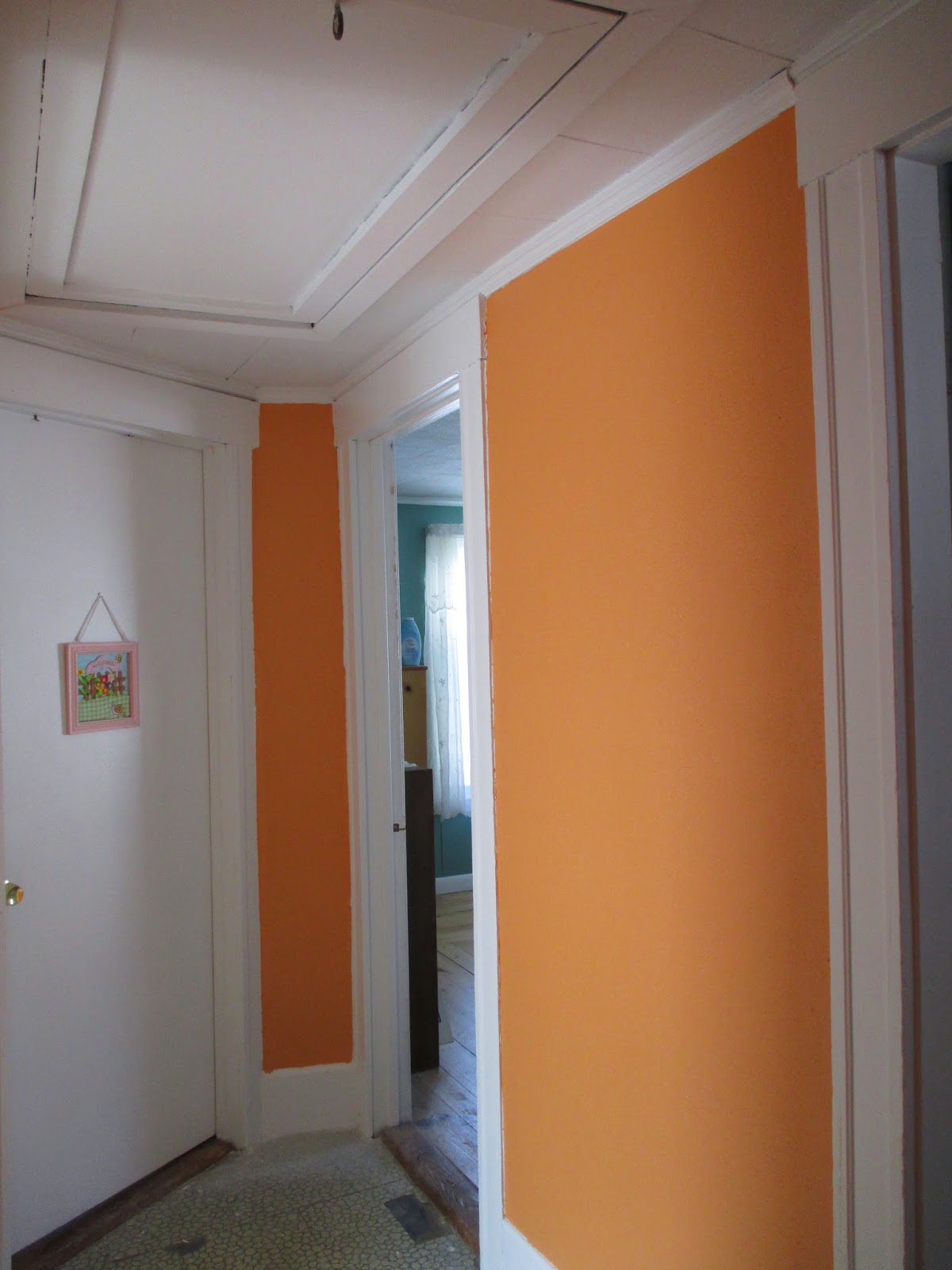 As you can see, the walls look great but the flooring looks horrible!  You can't see it too well in this photo, but it's gray tile supposedly looking like rocks - all broken - and it was put down with tile cement.   My first thought was to go over it with flooring, but it was so broken and there were some spots where it was lifting up, that I let Hubby talk me into ripping up the tile.   And he volunteered to do it!   Thank goodness, because I hate demo!  It only took him an hour or so.

I knew flooring would be a problem because I couldn't take the moldings off - they are wide, old-fashioned moldings basically imbedded in the walls.   So I searched around and found "Allure" flooring.  It is vinyl, made to look like wood, flexible, and you can cut it with a box knife.  It's a "floating floor" so you connect each piece to the next instead of gluing it to the floor.

What a bastard that flooring turned out to be!!  I ruined the first piece trying to cut around the doorways, which made me very nervous because it was kind of expensive!  And I was worried about not having enough pieces and having to buy another whole box because I'd ruined a piece or two!

But all's well that ends well.  It took me about 8 hours total, but I got that damn floor down! And I squeaked by with just enough pieces!  I can see every single mistake I made, but if you don't look too closely, it doesn't look half bad! 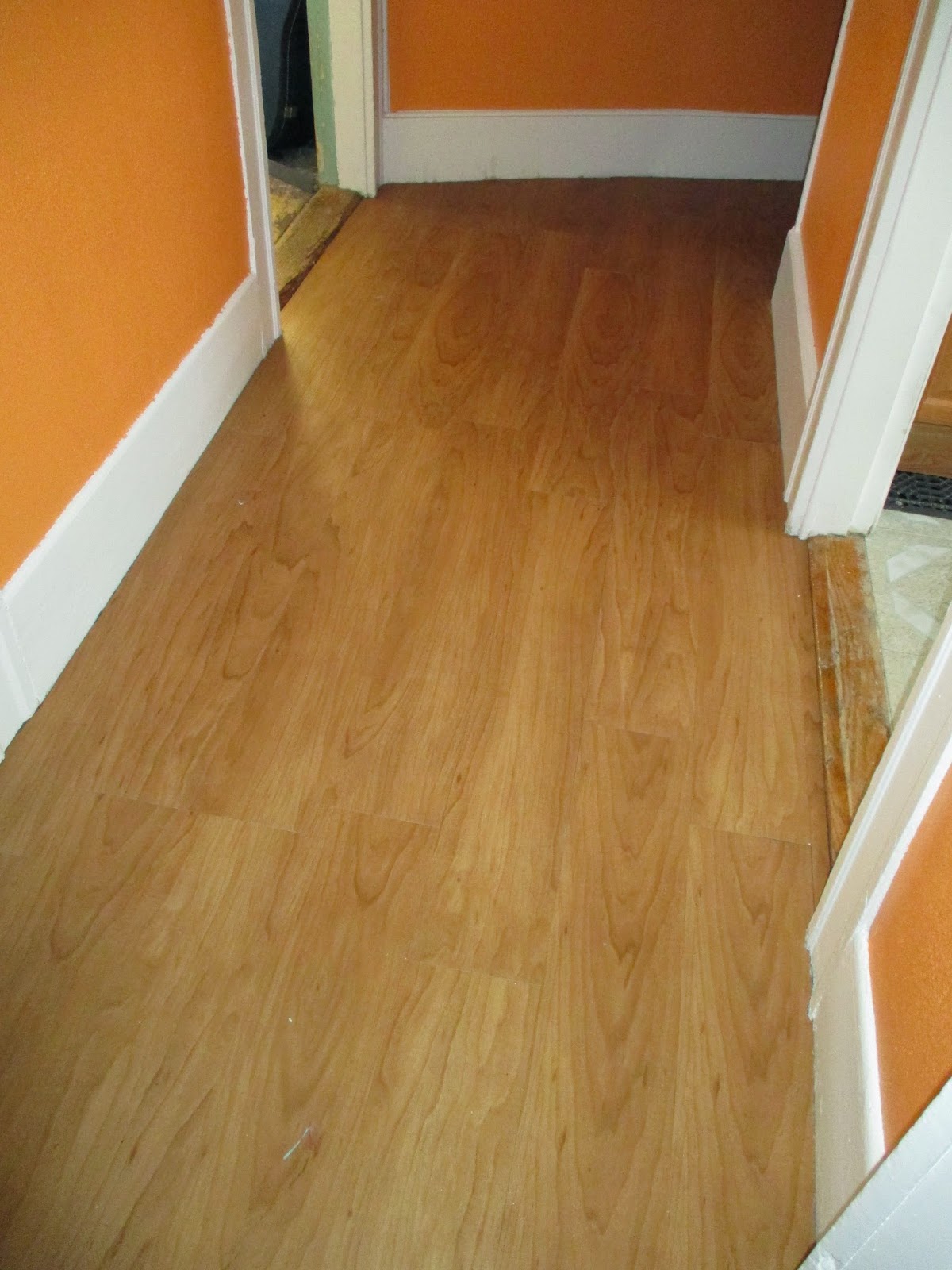 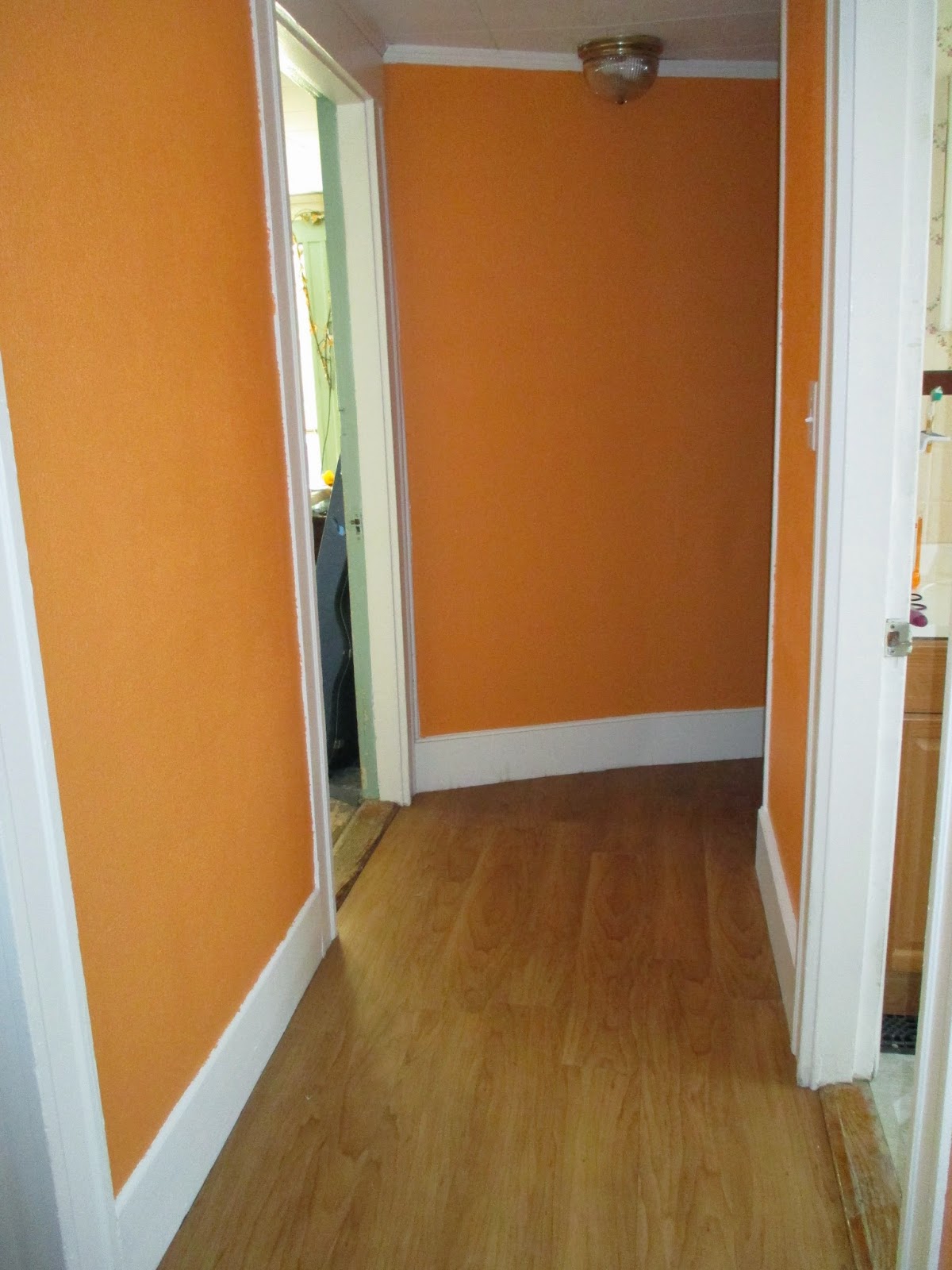 I varnished the thresholds tonight and went around and fixed all the little boo-boos in the painting.  The only thing left to do is put the edging at the top of the stairs.

All in all I'm happy with the way it came out.  It's certainly cleaner and prettier than it was before!!

Of course, that just makes the downstairs hallway look worse!!

My aversion to shopping is well-documented.  If I can do it online, I'd much rather do that than go into a store.   I'm also the type of person who wears something until it's threadbare.  And that's what happened with my shoes.  I'm not a "shoe person".  If I have one pair each of brown, black and white shoes for summer an winter, I'm happy.   But I'd had my shoes for so long, they were in a deplorable state.

AAA was having a special sale with Reebook/Rockport......45% off everything for this week.  There is a new outlet up in Merrimack, so Hubby and I thought we'd take a ride there this past weekend and look at shoes for me.   Well, as usual, the weekend was too busy, so I went by myself last night while Hubby was visiting his grandkids.

I was cursing myself as I left Salem, because the after-work traffic going north was horrendous.  But after I got past a certain area, it cleared out and I could move along.  It was kind of nice to be out driving while it was still light out, and the weather was nice enough that I had my car window open and my music blasting.

I finally got to the outlets, but had no idea where in the vast array of stores the Rockport store might be.  So I just parked the car and started walking.  It was Tuesday night so the place was pretty deserted, which was fine by me!   I was very disappointed, however, when I got to the Rockport store and they had nothing that would be appropriate for me to wear to work.

On the way back to the car, I saw a "Crocs" store and decided to stop in.   Crocs used to be pretty ugly. 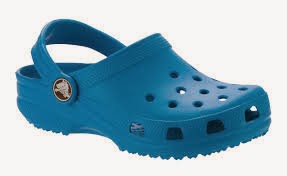 Certainly not something I could wear to work!   But they've come a long way since then, so I went into the store and hit the jackpot!   I bought these: 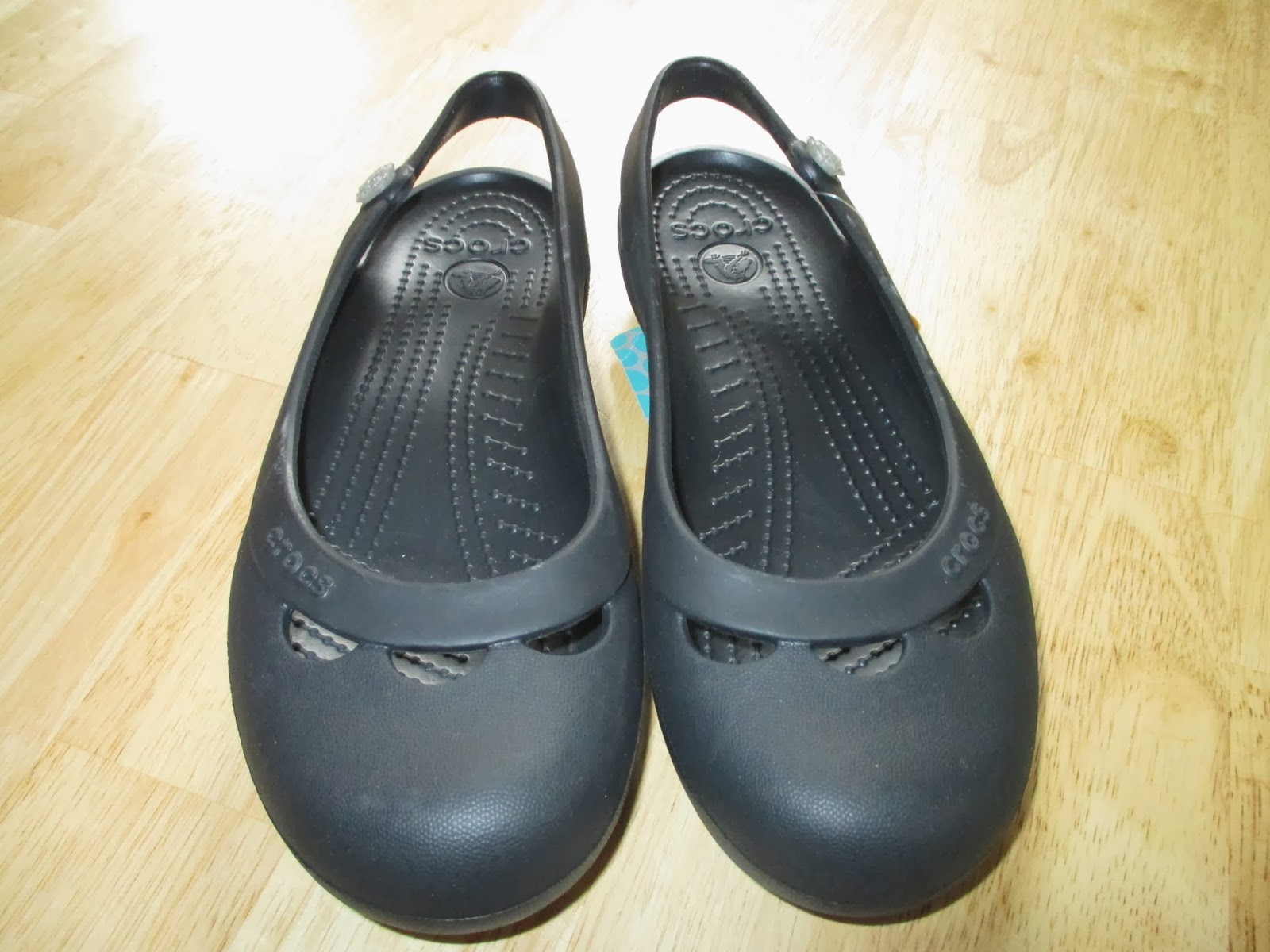 And these for the summer 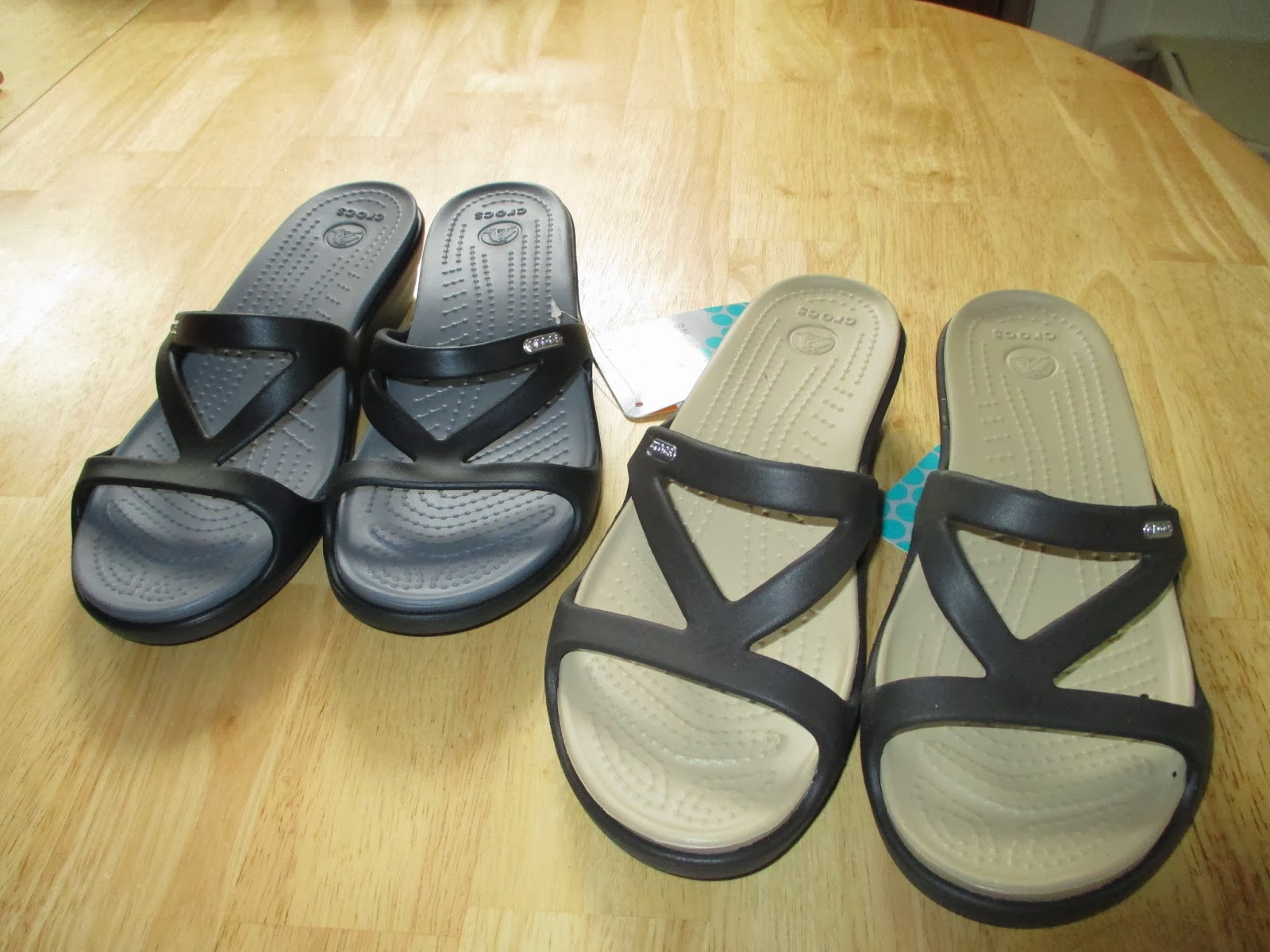 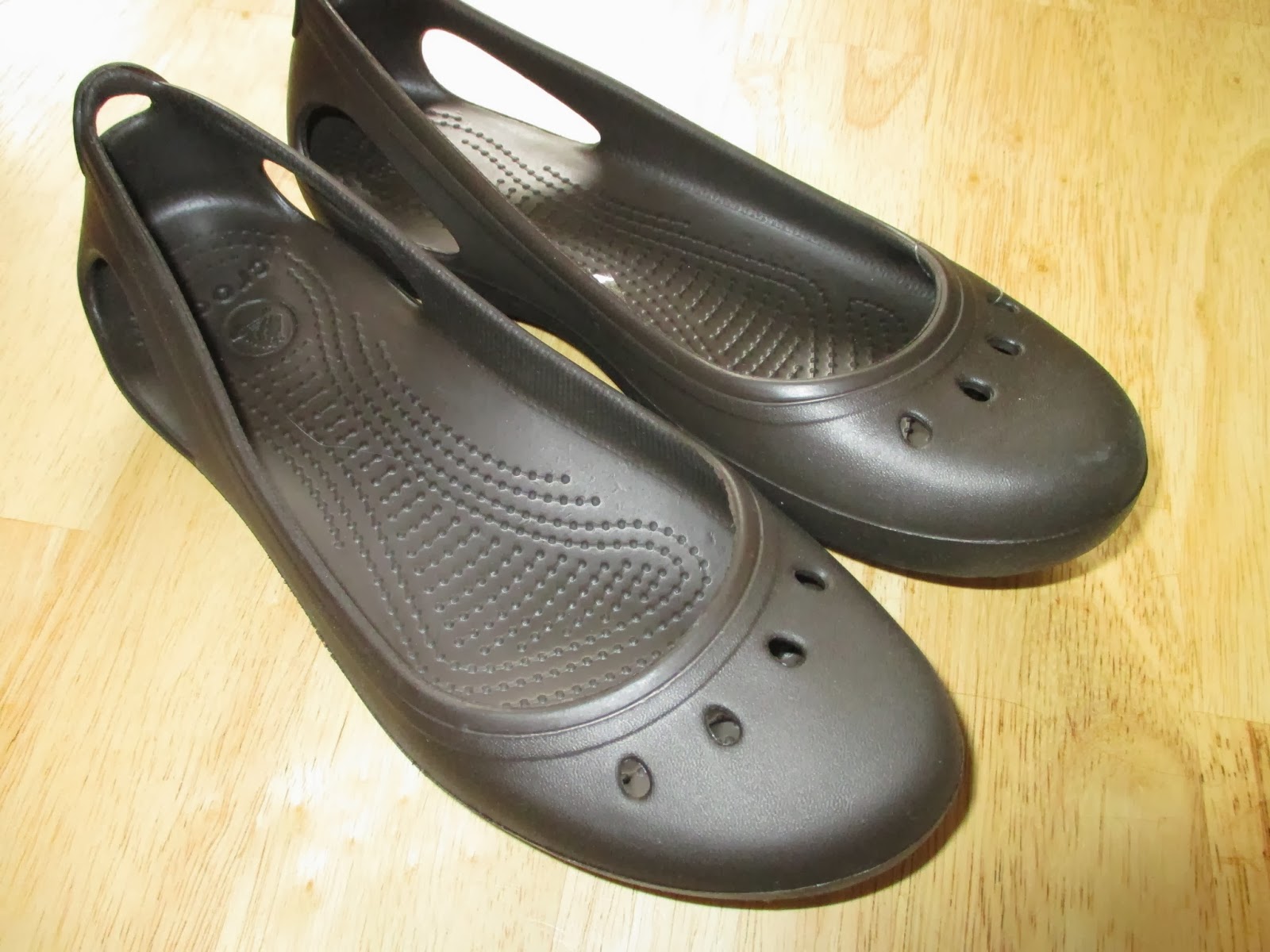 Four pairs of shoes for $80!  And they should last me a good five years!   I'll have to keep my eyes open now for some white sandals!!

Today was the day we finally took Elsie out for her 2-year birthday present.   We also took along Noah and his Mom, Wendy, because we took them to a Puppet Theater.

I haven't been to something of this sort in a long, long time. In this day and age of electronic everything, it was pretty refreshing to sit and watch a show made entirely with someone's own hands.  Drawbridge Puppet Theater is a little house made over into a theater.  I really have to applaud the people who put so much time and effort into this endeavor.

When you walk in, there's a tiny area where they sell the tickets.  On the wall they have some artwork by local artists.  This is one of the reasons we knew about the theater.  Some of Hubby's artwork is displayed there!

Then you walk into the theater.   It's set up with chairs facing the stage.   Only children are allowed to sit in the front two rows.  There's a big purple curtain, and then some smaller openings where puppets peaked out periodically.  Most of the puppets are marionettes.  I think the theater did a great job of putting on the show.
Noah, who is five, was quite enthralled, and understood the entire story.  Elsie, who is two, had more fun climbing on and off the chairs and playing with a sticker book her mother brought.  But it was fun to get out as a family.

After the show, the kids were invited to take a prize out of the treasure chest.  Noah got a spider ring and Elsie got a bouncy ball. Then we went out on the porch where they had hung all the puppets for us to see up close and touch.

It was a fun time to spend with our grandkids.....and nice to do something creative and non-electronic!  The owner told us they have people put on shows, so we're going to give him our Halloween show and see if we can present that in the fall.
Posted by Karen at 10:27 AM No comments:

I'm one of those who never takes time off for no reason.  I work hard, and I have such a strong sense of responsibility that I rarely even call in sick.

As I said before, I had a bad case of the crankies last week.  Hubby was instrumental in helping me change my attitude.   But it's still been a challenge to get up every day and get into work.  Partly because of the weather, and partly because it's an extremely slow time at work right now and the days are so long and boring.

On Thursday morning I got up and went to the gym, and while I was working out I was thinking about the day ahead, how long it was going to be, and the fact that I have a renovation project going on and that if I stayed home I could get a lot done on it.

A friend came in and we discussed, and I decided I would do it.  I would call in "sick".   It sounds silly to some people but I was very nervous.   I'm not a devious person, and I don't think I've ever called in sick when I wasn't.

The hard part was going to be calling my supervisor....who is also a very good friend....and telling her I wasn't coming in.   Thankfully, I got her voice mail and said I hadn't slept well the night before (which was true) and that I was dragging ass (also true).   Thank goodness for voice mail!   Because my boss is very sympathetic and she would have wished me well with her hope that I'd be feeling better, and that would have made me feel even guiltier!

For some reason, I was suddenly full of energy!!!  I got right to work painting all the moldings in my hallway, and spent the whole day until about 3:30 in constant motion.   I drove to Home Cheapo in my paint clothes...figuring everyone was still at work and no one would catch me "out and about" while I was supposed to be lying in bed coughing.

And when I got home I cleaned up and laid on the couch and watched People's Court!!  Bliss!  I laid there and watched TV until it got dark and Hubby got home.