Our Christmas present for my Dad was a show at the Palace Theater.  I saw tickets to see Sal "The Voice" Valentinetti, and I knew this would be the perfect show for him.   Sal was a contestant on America's Got Talent, and the judges and America just loved him.   Although he doesn't look it, he's only in his early twenties.  And yet he loves the music of the Frank Sinatra era.   Since the show, he's put together his own show with a brass band, "The Black Tie Band" behind him.

We had good intentions of bringing Dad out for a nice meal, but realized as I called several restaurants that we would never find one near the theater that didn't have a long wait.  So we decided to stop at the next place we drove by, and it was a Wendy's!   No matter....Dad is very easygoing, and he was quite content with a hamburger and a hot cup of coffee.  Cheap date!

Our tickets included a "Meet and Greet" before the show.   Dad didn't want to stand in line, so he sat in a chair while Hubby and I waited, then we called him forward when it was our turn.   Sal turned out to be a very friendly and personable young man.  He's extremely Italian!  When I told him this was my Dad, he says, "Forgedaboutit!  He's too young!  And who's this guy? Your Husband?  No way"!   And he turns them both toward the crowd and says, "Hey! Who do youz think is older?"  After our picture, he shakes my Dad's hand and says,  "Hey, keep it cookin', good lookin'!" 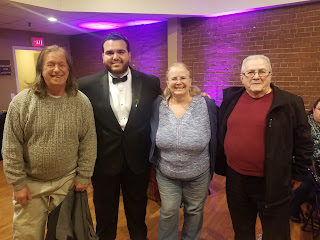 The Black Tie Band warmed up the stage. 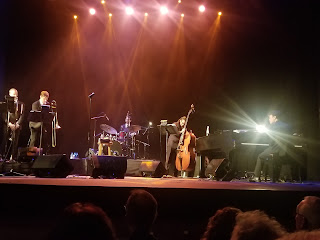 And then Sal came out and sang many of the old standards by Frank Sinatra, Ella Fitgerald, etc. In between songs he had a hilarious patter that kept us all laughing. 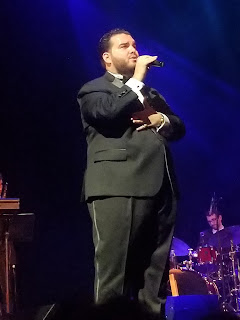 When we left the theater, we saw his buddy "Big Tommy" who had accompanied him to America's Got Talent and now was helping him with his tour. 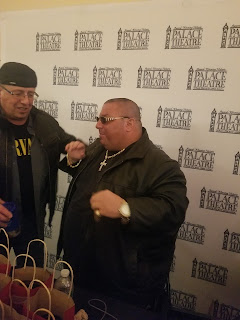 It was a great night and so nice to spend some quality time with my Dad!