Hubby and I were the "Feature" at our Friday night open mic.   Hubby and I attend almost every Friday night, so the regulars there have become good friends.   It was quite the honor to be asked to be the feature.  That means instead of the usual 2 songs, you get 6 or 8.

We picked out 8 of our favorites, then added one more for our "encore".     The encore was a song all about the canoe trip we took with these folks this past summer.

As you can see, we had a great time! 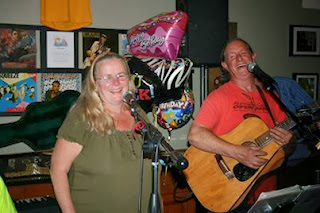 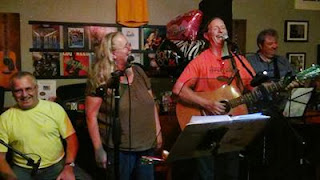 And we were incredibly lucky to put together a great band -  Tag's cousin Ricky on the bongos, and our good friend Bob on the bass.  They made us sound good! 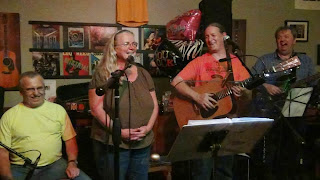 The ambiance in this place is great....warm, comfortable, loving.  We love going there, and we loved being the feature!
Posted by Karen at 6:47 PM 1 comment:

Yup, it's time to go back to work and rest!!   Somehow the long weekend I took for myself to relax and enjoy turned into more work than I thought!  Isn't that always the way?

Friday was a gorgeous, sunshiny day.   I felt compelled to go outside and do some gardening in the morning.  Basically, I got a whole mess of perennials from Freecycle, and had not planted them all.  The Daylilies required me to dig up the grass in the front yard along the stone wall.  I spent a few hours doing that.   I'll post photos in the spring when it doesn't look like a bunch of dead plants out there.

After that I still couldn't bring myself to go indoors, so I continued working on painting the porch.  Why is everything so much more work than you think it's going to be?   Friday night, of course, we went to the Open Mic Cafe.

Saturday morning was spent doing the housewifey stuff......cleaning, grocery shopping, cooking.  And Saturday afternoon we took Emily out for our annual Apple Picking trip!   It was a drizzly day, but it had taken us a while to find a date when we could all make it, so we went anyway. 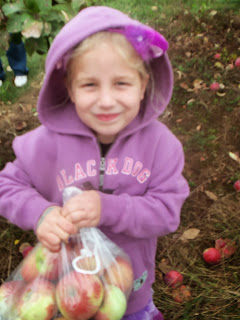 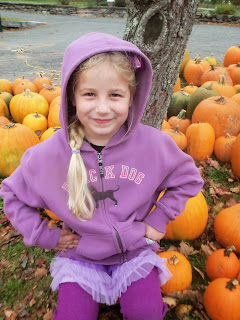 Went on the hayride, where Emily made Pepere into a scarecrow 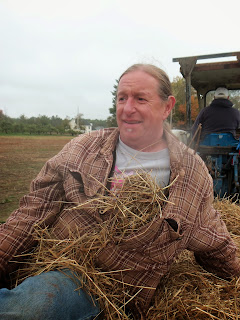 And came home to make some apple pies. 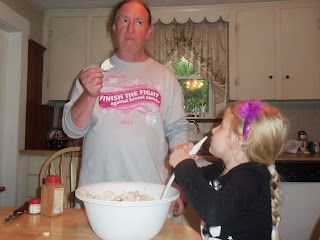 And Saturday night we had some friends over for our  Second Annual Rained Out Campfire Jam.  Yea, we're 0 for 2 in the rain department when we plan these events.  Luckily, we have wonderful friends so we had a great time anyway!
Sunday Hubby and I went to Cape Ann for the Artists Open Studio Tour.   We started the day at a little hole-in-the-wall restaurant called George's for breakast.   HUGE breakfast.....kept us full all day!  Then we followed the map and drove all around Cape Ann visiting different artist studios.   There was everything from pottery to paintings to sculptors and weavers.   Very interesting as all the artists were there to discuss their work.   Then we meandered over to Rockport and walked up and down Bearskin Neck. 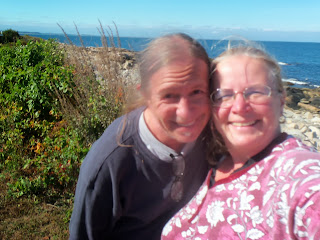 We came  home in time to see the Patriots win their game in the last 15 seconds!
And Monday I started the day by spending the morning working on Emily's Fairy Princess Mermaid costume.  I'll be back working on that tonight.
And finally, I spent the afternoon painting the porch.   It's ALMOST done....Hubby says I have to paint the sides of the risers. 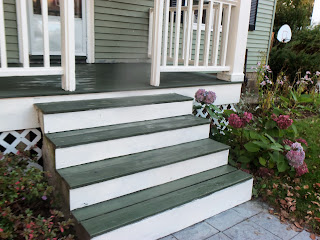 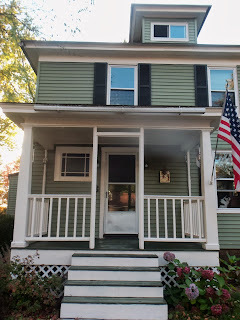 Finished off the long weekend with a campfire and practice for our Feature at the Open Mic this Friday night.
A busy weekend full of work and fun.  Who could ask for anything more??﻿
﻿
﻿
Posted by Karen at 5:29 AM 1 comment:

What's been going on in my life?   Lots and lots......some mundane, some more interesting.

It's been very steady at my workplace.  Lots of people traveling.  Our usual after Labor Day lull was only a small lull and is picking back up already.   Everyone is traveling to Italy.

We finally have neighbors.  The house next door is about 10 feet from ours, so we have really close neighbors!  It had been empty the entire time we've lived here.   A young couple bought it and are doing the same thing we did.....killing themselves working on it cause they're so excited about having their own house.   They seem to have a penchant for bonfire-style campfires and leaving all their lights on.  I want to be friendly, but no too friendly!  No need to have anyone butting in on our nice quiet life together.

Besides the usual house chores, we are winding down our vegetable garden.   Kind of disappointed.....we got some tomatoes, lots of beans, but no peppers, broccoli, eggplant or squash.  At this late date we have one zucchini growing out there.   We have already begun our mantra of  "next year"........."next year we'll build a bigger fence to keep the deer out, next year we'll fertilize, next year we'll figure out how to make broccoli grow  - and we'll have the best garden ever."    In the meantime, Hubby removed the last of the shrubbery in front of the house,  I moved some plants, and I am now trolling for more perennials for the front of the house.

So far, Hubby's plan to knock down his shed and build a new one is an epic fail.  The shed seems to be listing to one side......I'm going to laugh my a$$ off if it falls down completely before he gets a chance to rip it down.

And I am painting the front porch.  Jamie climbed up on ladders in the spring and painted the trim around the top of the house a nice creamy beige, and the front porch has been sitting there as white as can be.   I'm happy to use up the rest of the beige so the porch can match.   Hopefully I'll have time before the snow flies to paint the deck of the porch dark green.

Son Nick and his wife Kelly are busily caring for their new baby girl Audrey.  Hard to believe she's almost four months old!  I've had the joy of taking care of her here and there, but Kelly and Nick are doing a fantastic job -  she's a happy healthy little baby.

Emily has asked me again to make her Halloween costume.   She brought over a magazine with all kinds of costumes in it, and had circled many of them!  Luckily, she picked out one that she wanted above all others  -  "A Fairy Princess Mermaid".    Yea, you heard right.   She was a regular mermaid last year, but this mermaid wears PINK and SPARKLES!   I'm on hold at the moment in sewing the costume, as there has been some word about her requiring rainbow wings.....and I'm not sure if that's a separate costume or part of the Fairy Princess Mermaid.  She drew me a picture, so I'm going to have to see that before I proceed.

I got to see Noah and Elsie at Hubby's sister's wedding.   It was so nice to visit with them and watch them run around, blow bubbles and eat cupcakes.  We should be attending Noah's 5th birthday party soon, so I'll get to see them again.

We spend a lot of time going to Open Mics and stopping in to see other musicians perform.   On October 18, we have the great honor of people the Feature at our usual Open Mic on Friday nights.  Hubby and I are very excited, and working on our songs and creating a couple new ones.

And in between all this, we're participating in a walkathon for breast cancer awareness, visiting family and friends, hosting campfire jams, watching the Red Sox and the Patriots, going to the beach, etc, etc, etc.