My granddaughter Emily goes to a charter school- "Birches Academy".   They don't get all the funding that the public schools do, so they have several fundraisers every year to make up the difference.  Their biggest fundraiser is their Gala Event.  Hubby and I got to go and enjoy the festivities!


Since it's a "Gala", Emily got all dressed up for the event.  As usual, she looked beautiful! 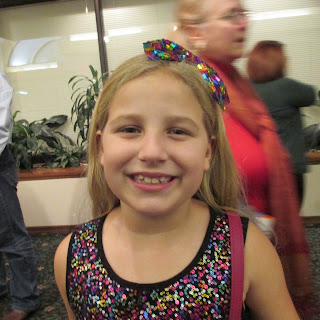 The fundraiser included a nice dinner, and many, many opportunities to donate to the school.   One of the first things we did on arrival is check out the Surprise Gift table.  A child or adult could buy a ticket, and then pick a wrapped gift and whatever you get is what you keep.

Emily and I checked out the table. 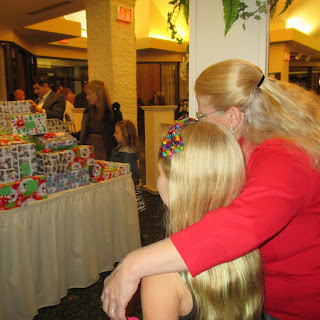 And she finally picked this gift!  It turned out to be a telescope!  After all the gifts were bought, they offered to let kids go back to the table and swap with another child if they wished.  Emily did, and traded her telescope to a boy who'd gotten a Polly Pockets playset! 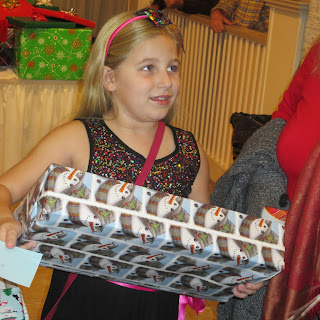 There was also a 50/50 raffle, a wine raffle, a raffle to win a 55" TV, a basket raffle, and a silent auction.   Kara won a painting that Emily's class had made and Doug won a photo of Ted Williams.  Pepere and I won nothing!  LOL 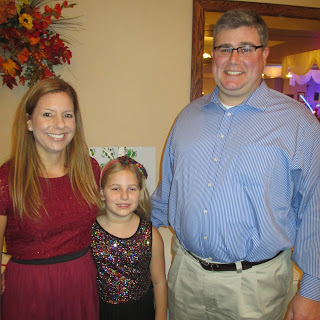 Pepere and I got to pose with our gorgeous granddaughter too. 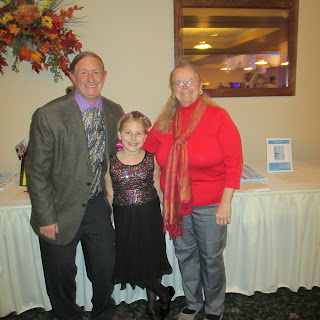 Emily and her best friend Maurie.....(I know I spelled that wrong)
Emily was even more than usually super-excited because Maurie was going to be having a sleep over at Emily's house!!! 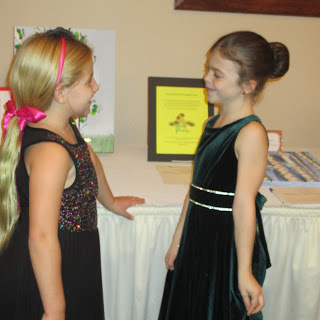 After the dinner, there was a very entertaining show put on by some enterprising young men who made all their own instruments. 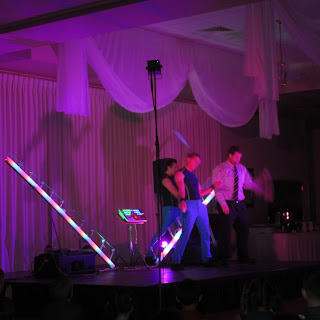 And finally, a band played so everyone could dance. 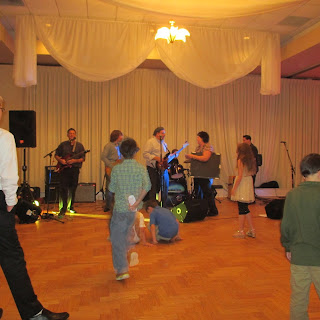 Emily and her friends had been dancing all night.  It was fantastic to meet her friends and their families and see her have so much fun.

This Halloween was sure different from our last couple of years!   When our first granddaughter Emily was little, we went out trick-or-treating with her and her Mom and Dad.   Then she started going with her little friends, we bought our house, and we figured it'd be fun to stay home and hand out candy.   Then a few years ago we were invited to a friend's house for a party....and we did that for the last few years.

This year we were going to be back to handing out candy because no one was having a party and, frankly, I missed seeing all the kids dressed up.

But our daughter Wendy was working on Halloween night and wasn't going to be able to bring our grandkids Noah and Elsie out for trick-or-treating.  So we volunteered.

And since Wendy would be working until midnight, we volunteered to have the kids come to our house and keep then overnight afterwards.  Our first grandchild sleepover!

The kids got to our house in time for supper...Mac and Cheese and Chicken Fingers, of course!

Then it was finally time to get into costumes!

Elsie was Sheriff Callie from a cartoon and Noah was an Army guy. 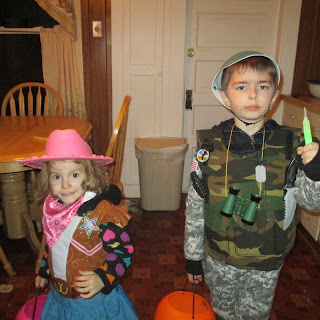 Grampy put on his cowboy hat and a poncho - not really going for a certain costume but he looked like a Mexican Bandito! 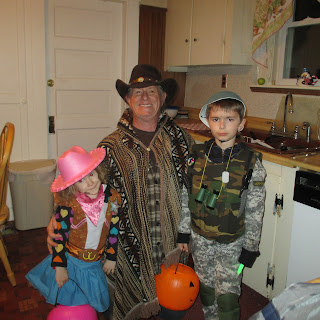 I chose not to wear a costume, but I had on my "Old Navy" sweatshirt so Noah said I could be a Navy guy.  When I pointed out that it said, "OLD" Navy, he said "That's the PERFECT name for you!"

We stepped out the door on the dot of 6pm as the kids couldn't wait any longer.  It was wonderful because the weather was perfect.  It's been a long while since I've traipsed from door to door with little kids to beg for candy.....what a blast!

We lasted an hour, which was plenty of time to fill up their Halloween pumpkin buckets.  "So heavy I can't even carry it," said Elsie!

When we came home, Noah asked if they could keep their costumes on and hand out candy to kids that came to our door.  Of course they did and that was great fun too!

Finally it was time to clean up, put on jammies, and settle down on the couch to watch a video.  The kids had brought "Home" with the voice of Jim Parsons as the little alien creature.   A perfect movie for adults and kids!

When the movie was over - at 10pm - both kids were still awake!  I was counting on them to fall asleep while watching TV.  Hubby volunteered to stay downstairs on the recliner and keep them company until they fell asleep and I went up to bed.  He joined me at midnight - both kids were finally sleeping.

At 7am I heard a little voice....I wasn't sure if it was in my dream or not!  Nope, it was Elsie - she and Noah were wide awake and ready to play!  We played and had pancakes for breakfast, then took them home around 11am.   We were tired but so very happy!