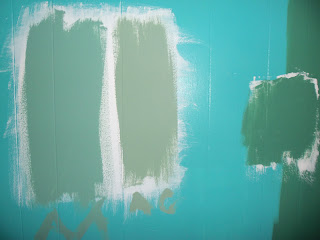 So far I'm leaning towards teh one on the left.
Posted by Karen at 5:14 AM No comments:

The joys of being a Memere are too numerous to count.   Spending time with the children is of course the biggest joy.   Having Emily over on a Sunday afternoon is a blast. 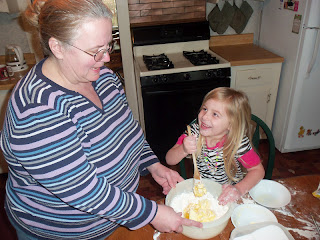 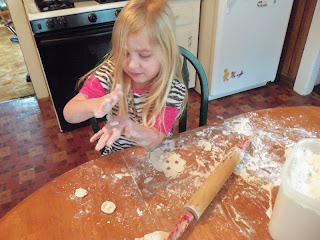 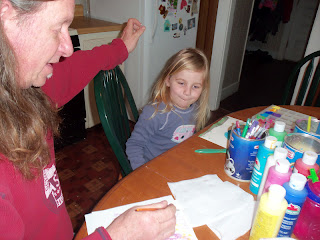 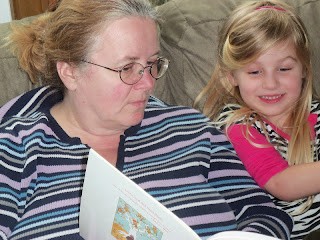 And one of my other joys of Memere-hood is making cute little outfits for the grand-daughters. 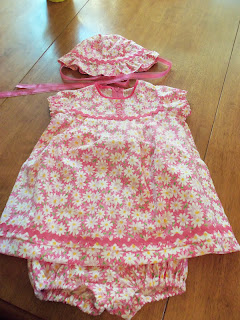 This one is for this little Angel 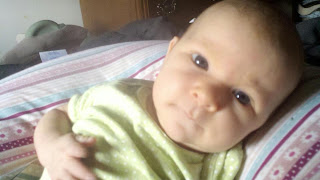 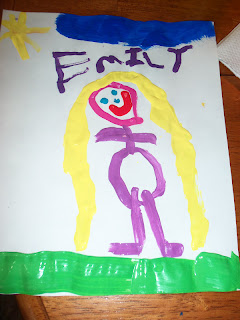 As you've probably noticed (or maybe you haven't) it's been a week since I posted anything.  Not because I haven't been doing anything, but because I've been doing so much!  As you saw on the last post, we are in the middle of another renovation project.   This not only takes up a bunch of time, but makes a disaster of the house as well.

Friday night - Groton Open Mic.   This is a very fun open mic that we don't get to often enough.  It's 45 minutes from the house, so it's run-home-from-work-hop-in-the-car-and-GO!   Luckily, they have the most scrumptious food there, so we don't mind eating dinner there.   We got home at 12:30am.

Saturday - I worked from 9am-1pm.   Went to Home Cheapo and got everything needed to paint the bedroom.  Painted the ceiling.  Made supper, then went out to the Bull Run to see some good friends perform.  Got home at 12:30am.

Sunday - Slept in (8am).   Read part of the newspaper, made breakfast for Hubby and I, entertained grand-daughter from 11:30-around 4pm.  (made cookies, painted, played, etc.)   Then painted woodwork, Hubby made supper,  and I collapsed in front of the TV for a few hours.

Monday AM - 1/2 day today so I had to work 11-2:30.    I went grocery shopping, did the budget, vacuumed and cleaned the kitchen before work, and now I'm home and hoping to finish painting woodwork and doors in the bedroom, and PERHAPS (if I can find the energy) start doing the edging on the walls.   My goal is to have the bedroom walls painted so we can varnish the floor this weekend.

And there you have it.   I fun-filled, hard-working, exhausting and exhilirating weekend.   It goes by much too quickly.
Posted by Karen at 12:03 PM No comments:

Work Hard and Have Some Fun

When Hubby and I first bought our house, we ran ourselves ragged because we were so enthusiastic about renovating.   It didn't take us long to realized that we could burn ourselves out very quickly.  So now we try to subscribe to the "Work Hard, Play Hard" philosophy.

Our work this weekend consisted of finishing the sanding in the bedroom.  Altogether, I estimated that Hubby and  I put in a total of 35 man/woman hours sanding the floor.    But I like how it came out. 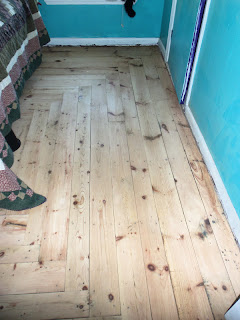 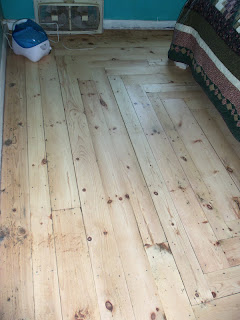 It's still rustic and original, but cleaner than it was before.   Now I'll be able to paint the ceiling and walls, then put a couple coats of varnish on the floor.

Our fun for the weekend was going to Winnikinni Castle a few towns over and enjoying a lovely walk along the water and up to the castle. 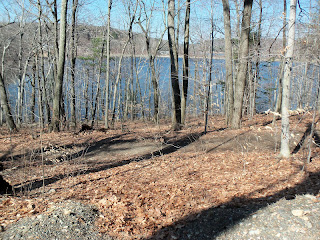 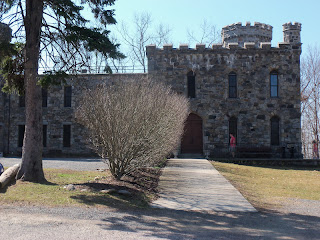 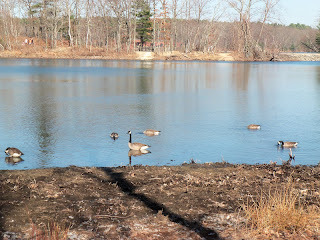 And for a little added extra fun, we went with my brother and his wife and daughter to Kowloon's for chinese food on Saturday night, and went to visit my Dad before our walk on Sunday.

A lovely weekend.
Posted by Karen at 3:02 PM No comments:

On A More Serious Note

Unbelievably, I've started this post four times.  I'm not sure what I want to say, but feel compelled to say something.   There are situations in life that change you, some for the better, some for the worse.

We've had a situation going on in our office for quite a long time.  Three years in fact.   There are seven people in our office who get along well.  And there's one who does not.   Unfortunately, it's that one bad apple that spoiled the whole damn bunch.  (I think there's a song in that!)

I've always subscribed to the philosophy that it's your own attitude toward people that should dictate how you relate to them.   In this case, with someone so offensive, so aggravating, so completely unprofessional and out of line, my normal attitude would be to avoid this person.   However, since I work with her, it was impossible.

Next scenario would be to change jobs.   I thought of doing that over and over again - in fact, Hubby mentioned many times that "there's no law saying you can't find another job".    But other than this person, I like my job - I like the people I work with - I like my supervisor.  I like working in my own hometown.   And frankly, there was a certain stubbornness  -  a little voice saying "Why should I be the one to change jobs, when she's the one who should leave?"

So I stayed.  And complained, and was aggravated and at times infuriated.   I have to give kudos to Hubby, who let me rant and rave night after night, then calmed me down and made me change my attitude.  This attitude would last until about an hour after I went to work in the morning, when this co-worker would manage to infuriate me all over again.

Did we complain? yes.  Did we have meetings?  yes.  Did we file grievances? yes.   And for some reason we could not understand, this person continued working there.

Finally, this past week, she went over the line one time too many, and they fired her.  It's like a shade has been raised on a sunny day.   For the first time in years, I got up on a Monday morning and didn't dread going in to work.   And the day was so...........normal.    We chatted about our weekend, we worked hard, we took care of our customers, we had a quiet lunch.....all the normal workday things that are taken for granted.

And I relished every one of them.   I know as time goes on, I'll lose that feeling of intense gratitude that the difficult times are over and we can have a normal workday.  But I hope that doesn't happen too soon.  I want to be thankful for my job, for my co-workers, for having a place to go to for 8 hours a day that I enjoy.

We had the good fortune to see our two grandchildren last night.  Usually, with Hubby at the camera, we get a million photos of Noah.    Tonight we got  some photos of Elsie. 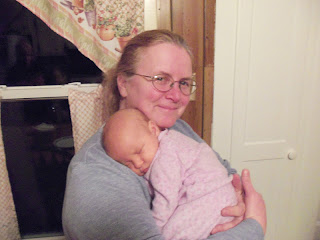 Now that "couch potato" season seems to be over, it's time to start another house project.   When we moved in, I knew I wanted to do the bedroom over as one of our first projects, mainly because the room apparently belonged to a young girl.    We determinted that  because the walls were this color: 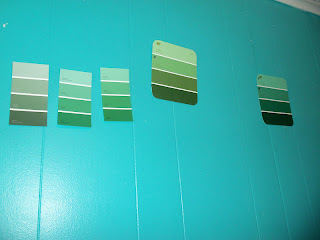 Yea, that's turquoise.  You can see where they painted (badly) over the dark purple too.   And I regret I didn't take a photo of the mint green rug on the floor....yea, the one covered in paint, glitter and some sort of hunk of wax.   yea.

Anyway, our first order of business was checking out what was under the rug and determining whether we wanted to try and renovate the original floor or cover it with new floor.

Last weekend I pulled up the rug and the layer of linoleum underneath and there was a nice wood floor - painted over. 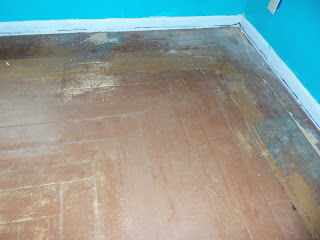 Hubby said the fatal words, "Let's see if we can save the original floor", and thus the backbreaking work began.

We went to the local Lowe's and rented a sander.   Who knew the #%#$%#$ thing would be so heavy?  I'm talking tonnage here.   Just getting it into the car I thought Hubby might have a heart attack.

Getting it up our stairs to the second floor was a whole other story!

We bought a few packages of the recommended sandpaper circles that go with the machine.   They were the easiest part of the project.  They velcroed on. 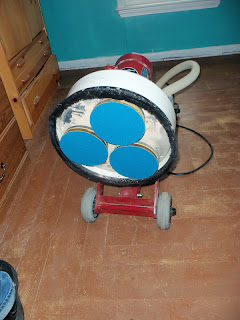 The sander had a vacuum built right in, so the amount of dust was actually a lot less than I thought it would be. But Hubby and I wore the recommended masks anyway. 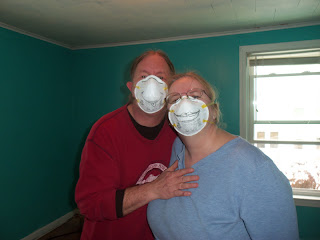 Aren't we cute with the smiley faces drawn on?  You can't tell, but we're smiling under those masks.  That might have been the last time we smiled all day.  For the rest of the day and into the evening this was us: 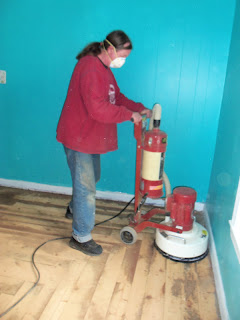 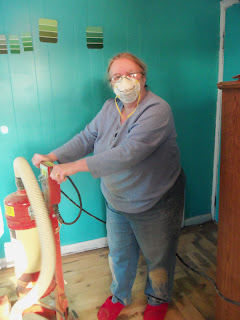 Our biggest problem was that the floor wasn't  flat (surprise!!) and the sander wouldn't get the middle of a board that was slightly concave, or an edge that wasn't perfectly lined up with the next edge.  Also, the floor had a thick layer of paint, and the paint would melt right off the floor from the heat of the sander and stick to the sandpaper.  So after a few minutes of sanding, we had to stop and pull all the hunks of paint off the sandpaper.  It was very tedious.  Thank God Hubby has the patience of a saint.

After 3 trips back to Lowe's for sandpaper (over $100 worth) and about 7 hours of hard work, the floor now looks like this: 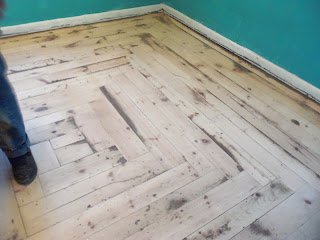 We figured we're going to need to use a hand sander for the edges and for all those spots that we couldn't get with the floor sander.    Although, after showing the photo on Facebook, I got a few comments saying we should leave it like that.