Apple Picking with Audrey and Elise

It was our joy to take our grand daughters out for a day of apple picking.  Audrey and Elise live in Nashua, so we decided to try out "Parlee Farms" which is only 10 minutes from the house.

They had all kinds of great activities and food.

There were a few barnyard animals....chickens, goats and sheep.  Elise turned and posed for me when she saw me with the camera.

They weren't that interested in the farm animals, but they loved the hay bale maze!  The bales were just high enough that we couldn't see them without following along behind them. Of course, they got to an exit and passed right by it so they could continue through the maze!

I finally had to encourage them to move on to the next activity.   We tried out the miniature tractors......Audrey didn't want to try it but Elise did. Unfortunately she was too little to keep her foot on the gas pedal and had no idea how to steer!!   Good thing it's a few years until she's ready to drive for real!

Next up was the hay wagon ride.  A tractor pulling three cartfuls of people brought us into the apple fields close to where there was some good picking. 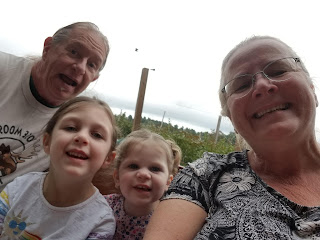 Audrey taught us all how to turn the apple round and round to take it off the tree.  This time she got a few extra leaves along with it!

This looks likea good one!

And one for each of them to munch on while we rode the wagon back. 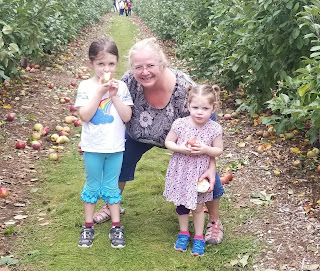 We were happy for the wagon ride back with our heavy bag of apples. 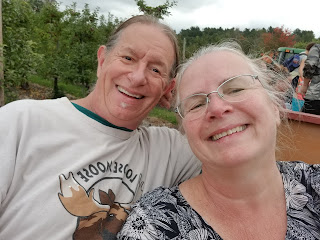 Time for pumpkin picking!  There were plenty of pumpkins to choose from.   Audrey and Elise each picked a small one, and two medium size ones for Memere's front porch.

Then my favorite part of the trip!   Apple Cider Donuts!  I have to say this was the only disappointment with this apple farm.  Their Apple Cider Donuts were the size of donut holes!   So the 6 donuts for $3.50 was pretty expensive. And they were pre-bagged so they weren't hot.  But they were tasty!

Fingers sticky with sugar and licking it off the lips.

Time to come home and make the apple pie!

Audrey rolls out the pie crust

And what to do while the pie is baking? Well, if you're at Pepere's house, you play music!
Elise plays the "little guitar".

While Audrey does her best Jerry Lee Lewis!

Elise playing the "big guitar" on her lap.

While Audrey strums on the "little Guitar"

Elise absolutely insisted she wanted to play the cello....so Pepere gave her a lesson.  I love her face when she realizes she is actually making a sound!

And Elise breaks into a dance while Audrey accompanies Pepere with two egg shakers and the jingle bells.

Another wonderful fun-filled day with two very special little girls.  We loved everything from their silly nonsense songs to their joi-de-vivre throughout the entire day!

The Gelato Gang was at it again, this time with a Field Trip to Water Fire in Providence.  Our tour guide for this trip was Kate, who did a fabulous job of planning and executing our little trip.

We got into Providence early so we could walk around and see how everything was set up without any crowds.  Providence created a canal right in the downtown area.  As a matter of fact, the canal goes right under the Providence Place Mall.   All along the length of the canal, braziers were set up, ready and waiting to be lit for Water Fire to begin.

On one end is a large basin, where more braziers wait to be lit.

There are many restaurants and shops along one side of the river.  They also had a few craft tents along the side streets.

We weren't sure where to eat. Kate had suggested New Rivers Restaurant.  As we were standing in front of it discussing the menu, Bob started talking with a gentleman who lived in the area and gave us four or five suggestions.

So we walked to several of those places and found them to be too expensive or unable to accommodate us without reservations.   So we ended up back at New Rivers!  They also had a reservation list but there happened to be 6 seats at the bar.  The bar was curved and we sat on the corner which made for nice conversation.

We left the restaurant in just enough time to see some of the brazier being lit.  There were speakers set up all along the canal, and this beautiful music played all night long. 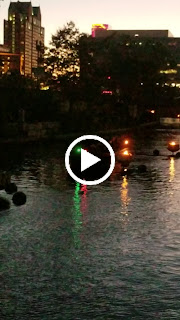 There were gondola rides available for hire.  Great job for the many college students in the area.

We thought it amusing that there were chandeliers hanging from the bridge underpasses.

This underpass was filled with hand-painted tiles apparently made by children.  Maybe in honor of 9/11?

The braziers were lit along the whole length of the canal. You could smell the smoke and hear the crackling of the flames.  It was like a long line of campfires!

The braziers stay lit until 11pm, so long boats filled with wood cruise up and down the canal all night with workers adding wood to the fires as needed.

This week part of the celebration was a parade of breast cancer survivors and a tribute to breast cancer awareness.  A very poignant moment for me was placing a luminary along the edge of the canal in memory of a loved one.  I placed one for my Mom, who beat breast cancer but ultimately died of cancer in 2010.    I want to thank my good friends for their support and love and hugs as I struggled to contain my tears during this short ceremony.

We walked back down the walkway to the basin area

where we were just in time to see the Breast cancer survivors march in carrying torches.  They were heading to the basin where they would light additional braziers. 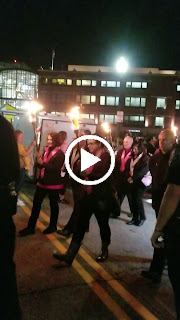 The Statehouse was illuminated in pink for the night.

There were a line of food trucks at the top of the basin. We helped ourselves to some ice cream for dessert!

Now we worked our way back down to the other end of the canal, where we came upon a stage with a young couple singing and playing guitar.

Bob, Pat and Rick check out the heat on the (fake) brazier decoration.

There were several of these "living statues" 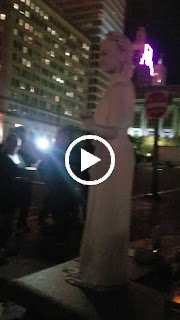 For a small donation, you could pose with this young lady.  Tag seems pleased!

And finally we walked all the way back down to the basin.

Where we were unexpectedly treated to fireworks!

What a day!  What an evening!  What great fun to spend time with wonderful friends!  Kate did a superb job as tour guide and we all had a great time! Thanks friends!