Hubby and I usually take two or three small long-weekend vacations each year.  It's a nice way to reconnect and relax from life's stress.

This year, being the "Year of Corona", we were unable to go on our planned trip to Canada with friends.  We had skipped what had become our annual trip to The Essex Culinary Resort in January, naively thinking we would go sometime later in the year.

As places began opening up again, I felt the need to get away with Hubby.   My colleague and friend, Marianne, had gone to a little B and B in NH, and said it was the best B and B she'd ever gone to.  That's all I needed to hear!!

So Hubby and I went to the Follansbee Bed and Breakfast in North Sutton, NH.   Not very far away....but a whole lot different than home! 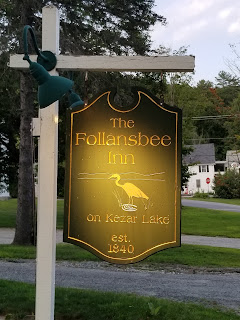 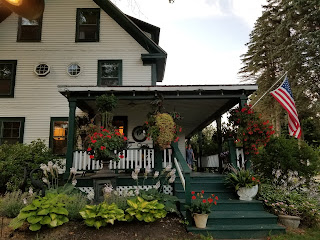 We got there Friday early evening and couldn't wait to jump in the lake....literally!  The inn is on Kezar Lake - a small but very lovely lake.   The inn has some waterfront property.....no  beach per-se, but a dock and a nice area including lots of chairs, a picnic table and a hammock. 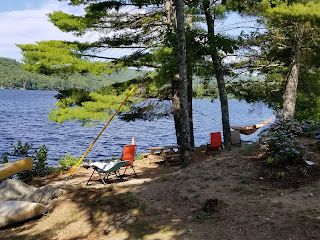 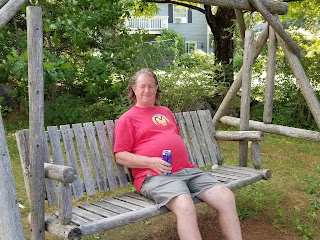 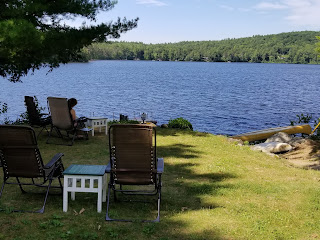 We spent some serious time just sitting and contemplating the lake!  After our swim, we checked with our host, Denis, for a good place to go and eat.   He recommended the Flying Goose, a short drive up route 114.    The food there was excellent!  Although I was disappointed at not getting a table outside on the lawn.

After sitting for a while and enjoying  the darkening sky, we went off to bed. 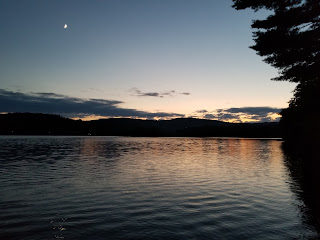 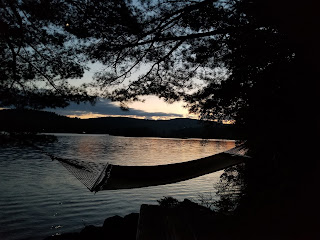 Our Saturday morning breakfast at the Inn was wonderful.  Fresh strawberries and pineapple, frittata with asparagus and Gruyere cheese, delicious soft breakfast roll with butter and jam, and a very interesting maple glazed bacon with pecans.   They set up some outside seating, which they liked so much they decided they'd keep it.  The innkeeper's helper came along and took our photo...maybe we'll make their web page! 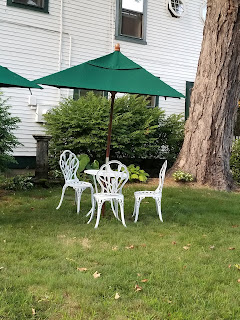 Then it was back into bathing suits for a nice swim, relax and read for a bit on the beach, and then came my favorite part of the trip.   The inn offers use of all kinds of boats - kayaks, canoes, paddle boards and pedal boat.  We chose to go out in a double kayak. 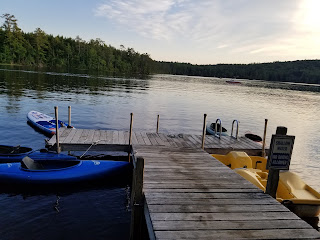 If we'd had a video of Hubby and I trying to get in and out of the kayak, we could have sold it for a million dollars!  Suffice to say, it wasn't pretty but we managed to get in!   Later on, getting out was a whole 'nother story!!

Once we were in we were very comfortable paddling around.  We had heard that there was an island everyone called Blueberry Island that was laden with fresh blueberries.  We headed there and sure enough we were able to pick several handfuls of fresh New Hampshire blueberries! Yum!

We continued around the lake to the other side of the island where we'd been told there was an inlet.  After trying to kayak our way through a bunch of reeds, we finally found the opening to the inlet where we kayaked for about 10 minutes through absolutely silent waters to a defunct beaver dam where we turned around and went back.  On the rest of our cruise around the lake, we saw a mommy and daddy Loon and their baby! 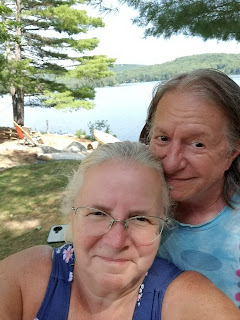 Another nice swim and off to an early dinner.  We chose the Salt Hill Pub Shanty in Newbury, NH, which just alright....but we did get to sit out on the deck.

Back to the inn for a game of Scrabble and then off to an early bed.......we were exhausted!

For our second breakfast our innkeeper made blueberry waffles, ham and cheesy grits, and some watermelon.  They also make their own granola which was delicious!  We found this cozy spot to have breakfast: 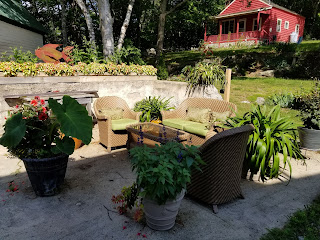 Packed up and ready to go, we said good-bye to the Follansbee Inn....it was a lovely place and we'll be sure to go back. 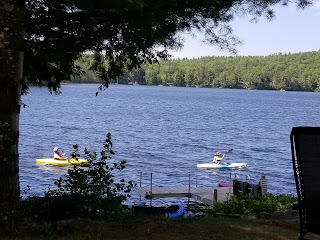 Hubby and I continued our annual tradition of visiting the New England Aquarium for Valentine's Day.  This started when Hubby and I were first married, and he planned a day in Boston at the Aquarium for me because he knows how much I love my penguins! 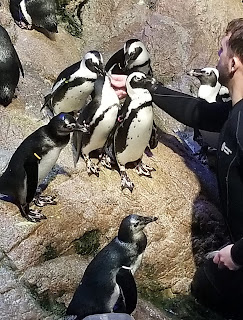 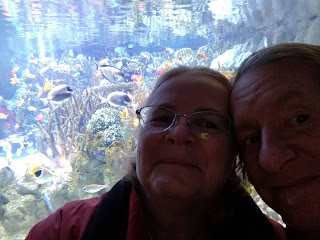 I was very sorry to see that the Little Blue Penguins were gone from the aquarium.  Thank goodness these guys are still there!

This diver is trying to feed the fish.  The manta rays were the most aggressive.  They wouldn't leave her alone!   Later on, there's a place where you can lean over and pat the Manta Rays in a special shallow tank.  I've done it many times before....but this time one of them flipped me off and soaked me from head to waist!

We had a wonderful time staying at the Marriott Longwharf  Hotel right next door to the Aquarium.  They have a lovely pool there.  For supper, we hopped on the T and went to the Cheesecake Factory for dinner.  (Another Boston tradition of ours.)

Hubby couldn't decide which Valentine Card said it best.....so he got me three!

On Saturday we went to the JFK Library.   I had never been there before and always wanted to go.  It seemed like a good idea on a day when it was frigidly cold outside....not a good day to walk around the city!

The guard said this is the most photographed part of the exhibits.

A congratulatory note send to the newly elected President from the sailors on the Japanese boat that sunk  JFK's PT Boat.

A bit fancy for my dinner parties.

There were tons of videos of JFK speaking and photos of his family, campaigns and presidency.  Truly a sad thing that we lost him so young.  One wonders what our country would have been like if he'd been President for 8 years.