The Things I Learned While Stripping.........Wallpaper

Every winter, it's a toss-up on whether it's going to be a lazy winter or a productive one.  This one had been a lazy one. The project I had in mind was renovating the stairwell and front hall.  The wallpaper in the hallway is the same paper I put up in another house I lived in.....about 35 years ago. 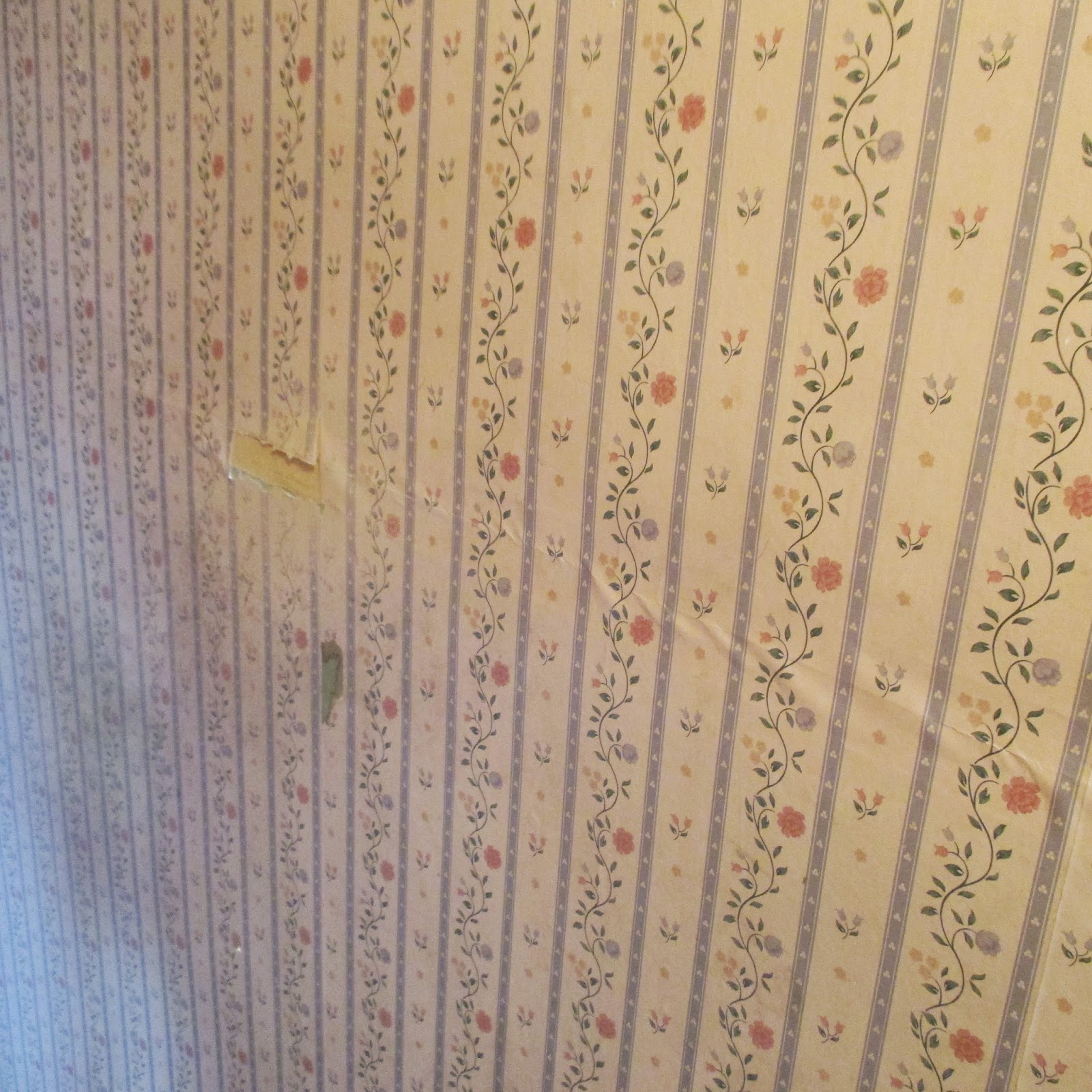 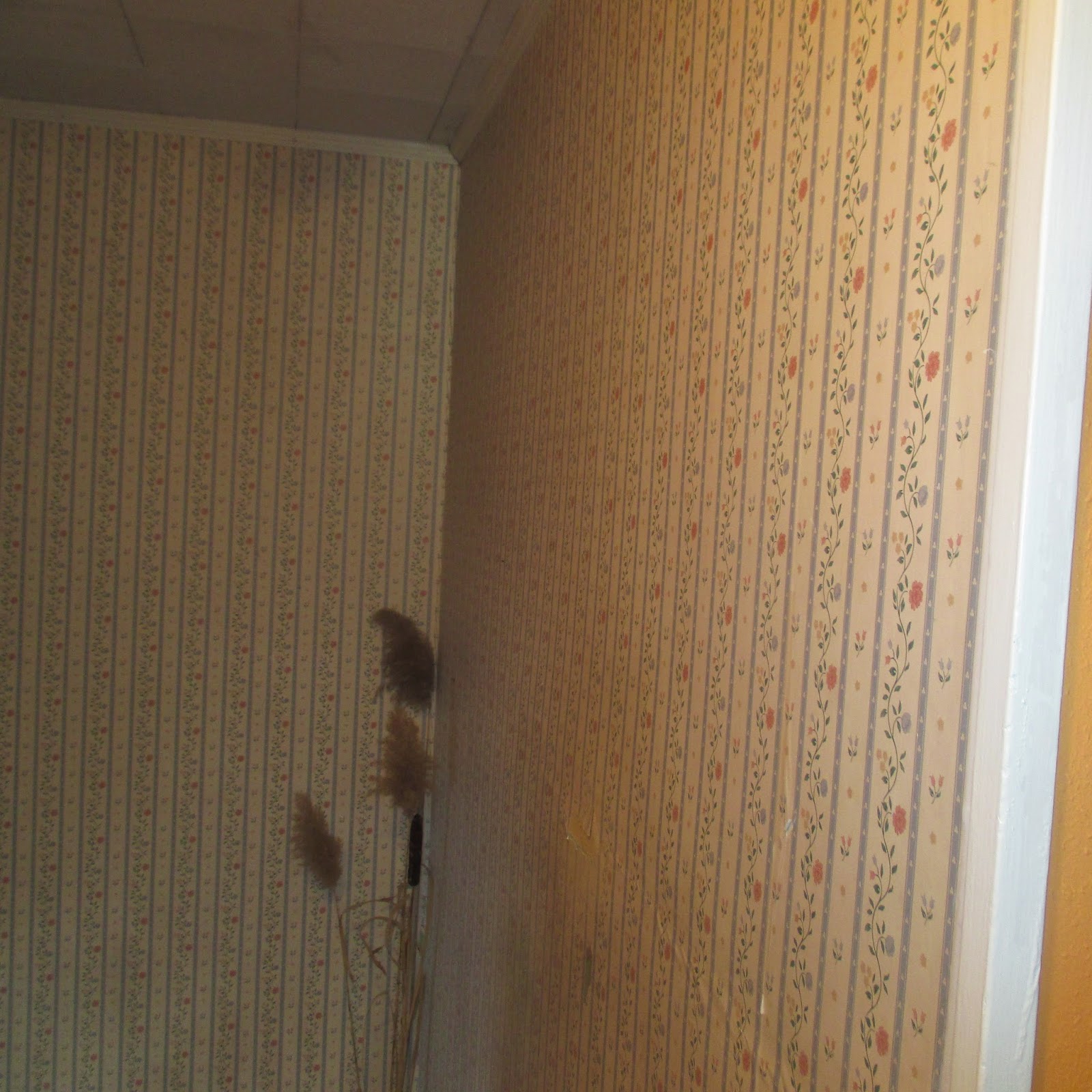 I knew it was going to be the kind of project I'd have to go "all in" with.  And I just wasn't in the mood.

And then the first day of "Spring" arrived, and I realized if I didn't get moving, I'd have to chalk this winter up to be a lazy one.

So I just got up one Sunday morning and decided to start stripping wallpaper.  Unfortunately, I really didn't know what I was doing.  I bought "The World's Best Wallpaper Stripper" and read the instructions.  It said I should "score" the paper so the liquid would seep in underneath.  But I think the scoring tool I used went too deep, and unfortunately I made a pretty big mess. 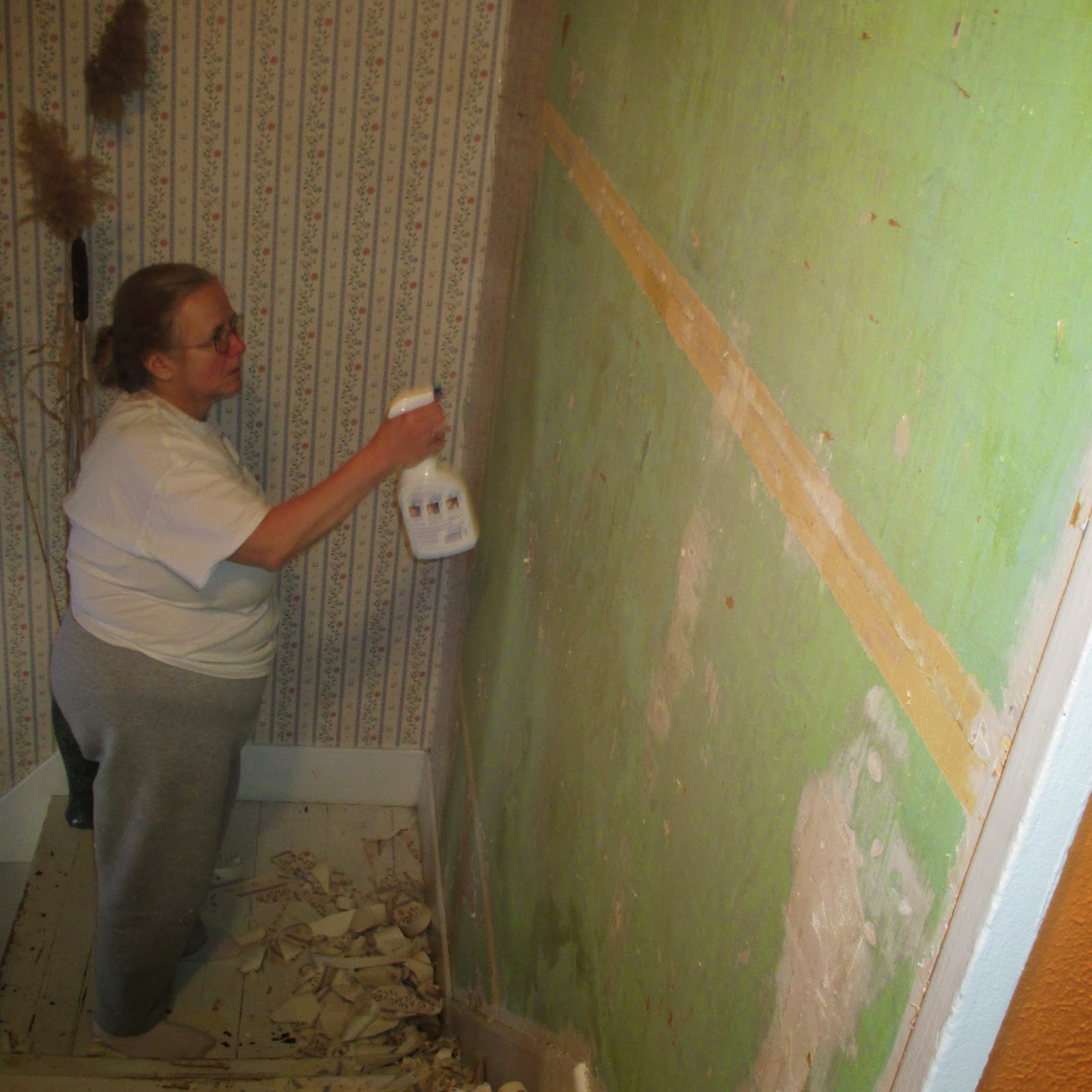 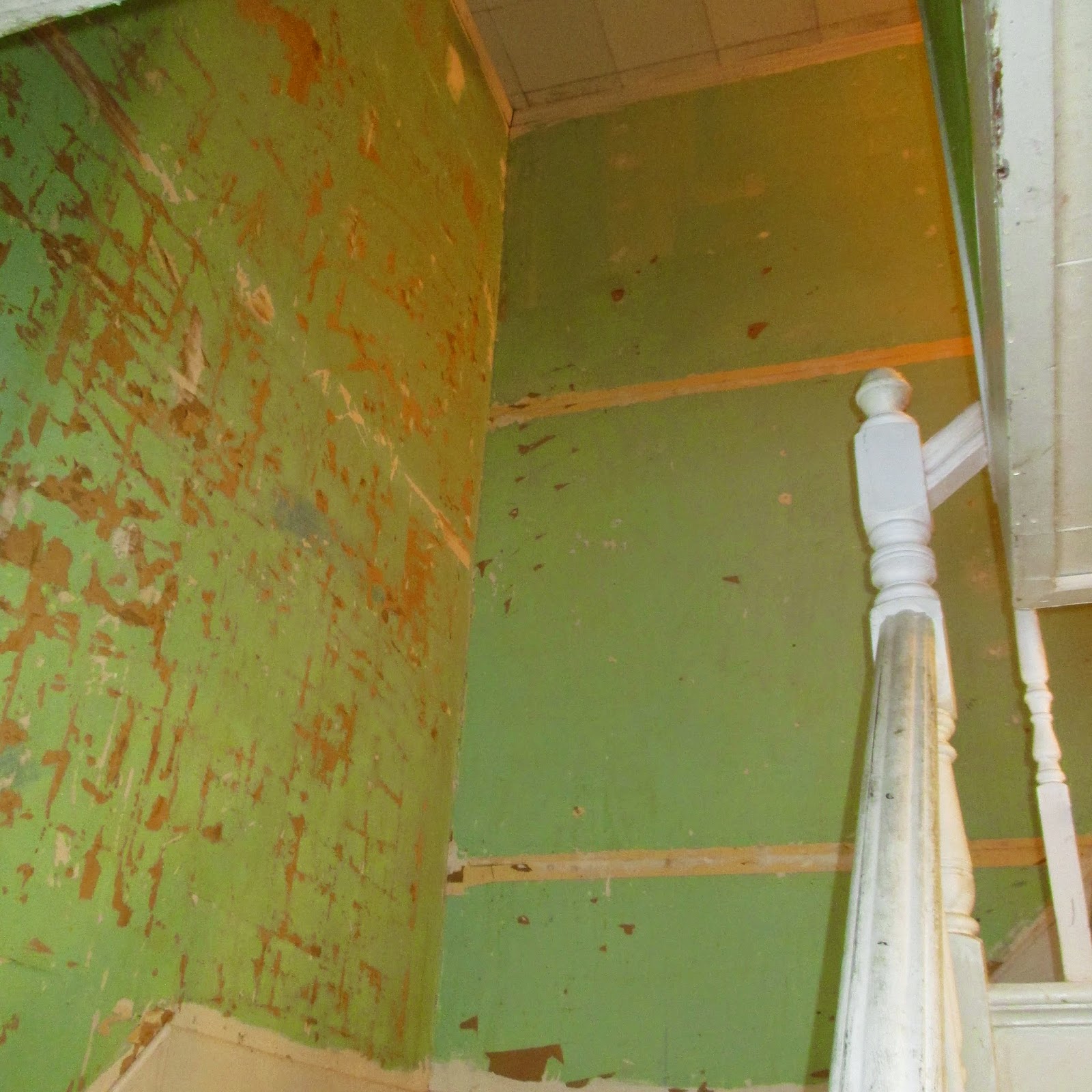 Luckily, our good friends Cheryl and Gayle visited that weekend, and gave me some excellent advice.  Rent a steamer.  I knew there was no way I'd get all that wallpaper stripped the way I was doing it, so I figured I'd go along with their advice.

I took the day off on Friday and went to Home Cheapo and rented the steamer for $40/day.  My hope was that I'd get it done in one day, but I figured I'd keep it for Saturday if I had to.  I also went and borrowed my brother's ladder to get up into the high part of the stairwell.

I hit my first snag when we tried to put up the borrowed ladder and it was way too tall.  I was anxious to get started using the steamer and not lose any time with it, so I shrugged off the stairwell problem for later and started up the steamer.

It took awhile to heat up, but once it got going it kept going for 3 hours.  And what a blessing it was!!   So much easier and well worth the cost and hassle of renting it.   At one point I realized I'd forgotten to score a section of wall before steaming, and it worked just as well.   Actually it worked better because I didn't cut into the paint and sheet rock underneath and cause gouges.

After working for 3 hours, I took a break and went online and found that Lowe's had a 16' extension ladder for $75.  I used my Hubby's philosophy...that every project needs a new tool....and took a ride to Lowe's and bought the ladder.

I finished with the wallpaper stripping about 4pm, cleaned up and returned the steamer.   I was pretty proud of myself for getting it all done in one day.

Today...Saturday....I spent the day sanding the walls.   The sander can be a pain in the butt with having to attach the sandpaper over and over again, but so much better than doing it by hand. 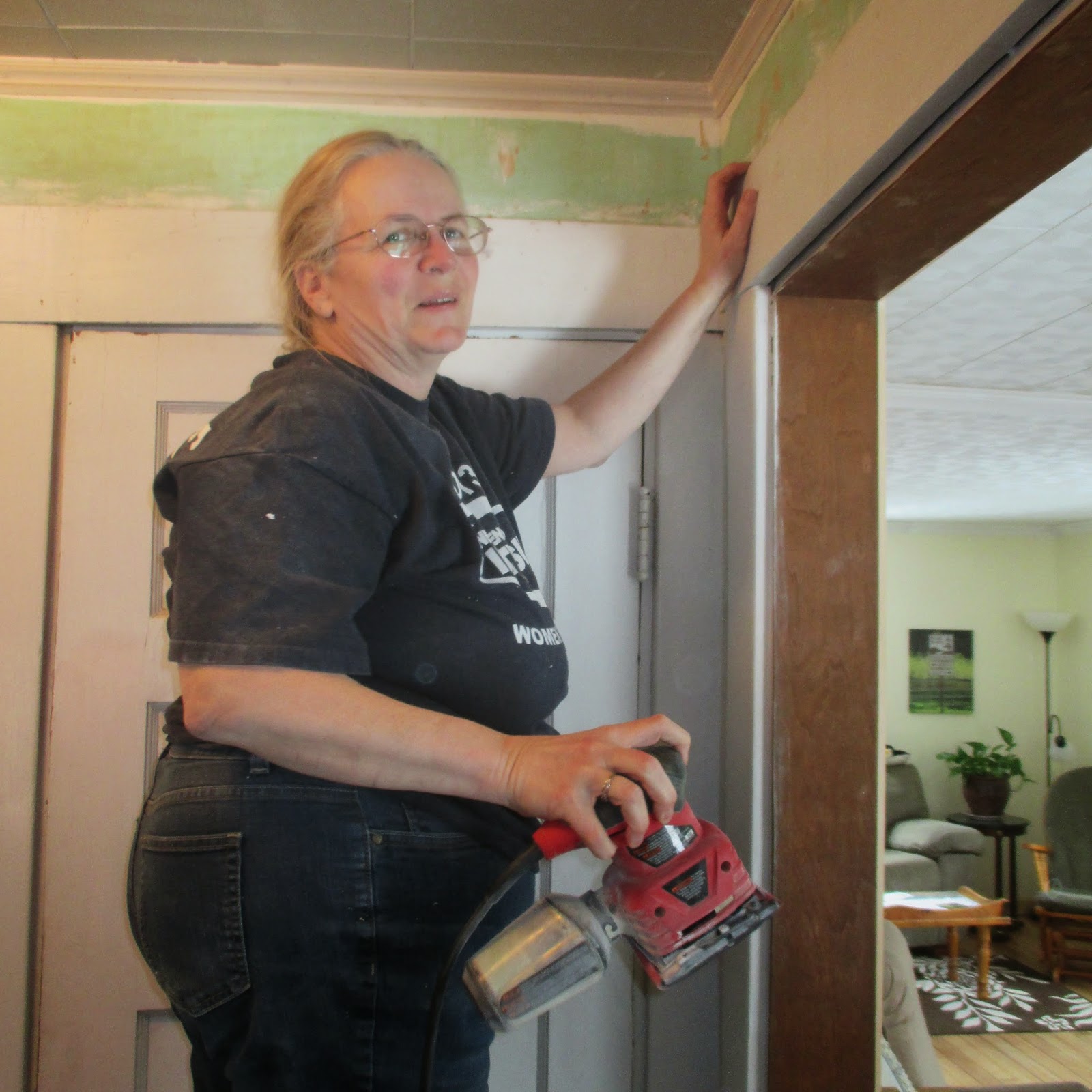 I thought I might do some gooping and hole-filling-in today too, but after 4 hours of sanding I thought my arms might fall off.  I'll save that for tomorrow.

Gayle has offered to skim coat the walls once I get them into shape. I just might take her up on that because I know I can't do the job as well as she can.   After that, to me, it's the fun part.  Painting!  I always like making things look better rather than worse.

My Aunt Izy is 90 years old.  She's well past the ability or desire to have anything to do with technology.  In recent years she has bought two TVs...one for her living room and one for her bedroom.  Both times she asked if we could come over and set them up.  If she could have just plugged them into the wall she would have been all set.  But connecting them to the cable box and figuring out the remote controls was beyond her comprehension.

So you can just imagine how surprised I was when she called and asked if I could come over and help her with her cell phone.

It turns out that, 7 years ago, she bought a Jitterbug phone to keep in her car just in case of emergencies.

Yes, she still drives her own car.  Granted, she drives it about half a mile to the grocery store and sometimes 3 miles up the road to Walmart.  But she does still occasionally drive it to the next town over for a doctor's appointment, so I was actually glad to hear that she had the phone.

For some reason, she started thinking about it and realized she didn't really know how to make a call on it.  So she tried to make a call and it didn't work.  In fact, she somehow managed to make a collect call to the friend she was trying to call.

So I came over on a Saturday afternoon and checked out the phone.  When I dialed a number it said, "Thank you for calling Verizon Wireless.  We will connect you to an operator who will complete your call with a credit card."  I wasn't very happy to hear that!  Although I was pretty happy that Aunt Izy had the presence of mind NOT to put in her credit card number.

I sat beside Auntie on the couch and called the "customer service" number.   After going through 20 minutes of diagnostics, the young lady told me that the phone my Aunt has is "no longer being supported by the company."   In other words, it was obsolete!

When I asked her how long the phone had been unusable, she couldn't say because my Aunt had NO call history.  She had never made a call on that phone.  So I said, "Okay, send her a phone that works."  The "customer service" representative said she could send her a new phone.........for $79!!

I said they should send her a phone for free.  "Oh no"  they said,  "that phone is no longer under warranty."
"You don't understand", I replied.  "YOU are the ones who changed the contract.  SHE did nothing.  She didn't break it, or drop it, or lose it. You need to send her a new phone."

While the young lady was checking with her supervisor, Auntie was getting quite agitated listening to all this discussion and told me to cancel her account.

When the girl came back with an offer from her supervisor to give us a $20 discount, I told her to cancel the account.  She just said, "okay" and did just that.

On Monday morning, away from Aunt Izy's ears, I called Jitterbug back, asked for a supervisor, and blasted him.  He agreed to send her a new phone for free.  Especially after I discussed with him the possibility of me taking steps to get back the $12.66 per month she'd been paying them for the last 7 years!!......since, you know, they couldn't tell me when the phone stopped working.  He said her account would be re-activated at the same rate.

I let Auntie know a new phone was on the way.  (During that same call she said her TV was "doing something funny" and she tried to fix it and now it doesn't work at all.  We went over and turned back on her cable box.)

On Tuesday, I went over to set up the new phone.  It's supposed to be so easy! Of course, I followed the steps and it wouldn't work.  I had to call "customer service" again. This time, they gave me a hard time because I was not listed on my Aunt's account as someone who could discuss her business.  After putting my aunt on the phone (where she spent the next 10 minutes explaining what was happening with her phone - serves them right!) they allowed me to talk to them.  Interesting that the two previous times I called, they allowed me to cancel her account AND reactivate it without her permission.

Turns out Idiot Supervisor Boy hadn't reactivated her account.  And besides that, it didn't say it in the manual that you had to charge the phone before activating it.   So I told Auntie we'd set the phone up to charge, and I'd be back the next night to help her activate it.

Back over there the next night and of course the activation process won't work again!!  I had to call "customer service" AGAIN, where they AGAIN gave me a hard time about calling on my Aunt's account.   Turns out Idiot Customer Service Girl didn't make a note of the fact that I was supposed to be able to discuss her account.  Finally, after 45 minutes, we got the phone activated.

I'm really quite disgusted that Jitterbug, who advertises themselves as a company that makes easy-to-use phones for the elderly, would have such horrible customer service and phones that are so difficult to activate.  I looked into another company, but that would have involved buying a new phone, and Aunt Izy is just stubborn enough that she wouldn't be willing to do that.

The other company rep I talked to did tell me, however, that they had a "test" number that customers could call as often as they wished to make sure the line was working.  When I talked to Idiot Supervisor Boy, he said, "oh yes, we have that too."    I suggested that in the future, they should let people know that so that, if they have a customer like my Aunt who rarely uses her phone, it won't go obsolete without her knowing!!!

Hubby and I love to celebrate Valentine's Day.  It's cheesy...we know!  But we don't care because we look forward to it and we love it.  Quite a few years ago,  we started a tradition of going to the New England Aquarium in Boston for our Valentine Day adventure.  And this year was no different.  However, this year we added a few things.

We did start out at the Aquarium.  We love the quiet, gentle nature of all the beautiful colored fish. 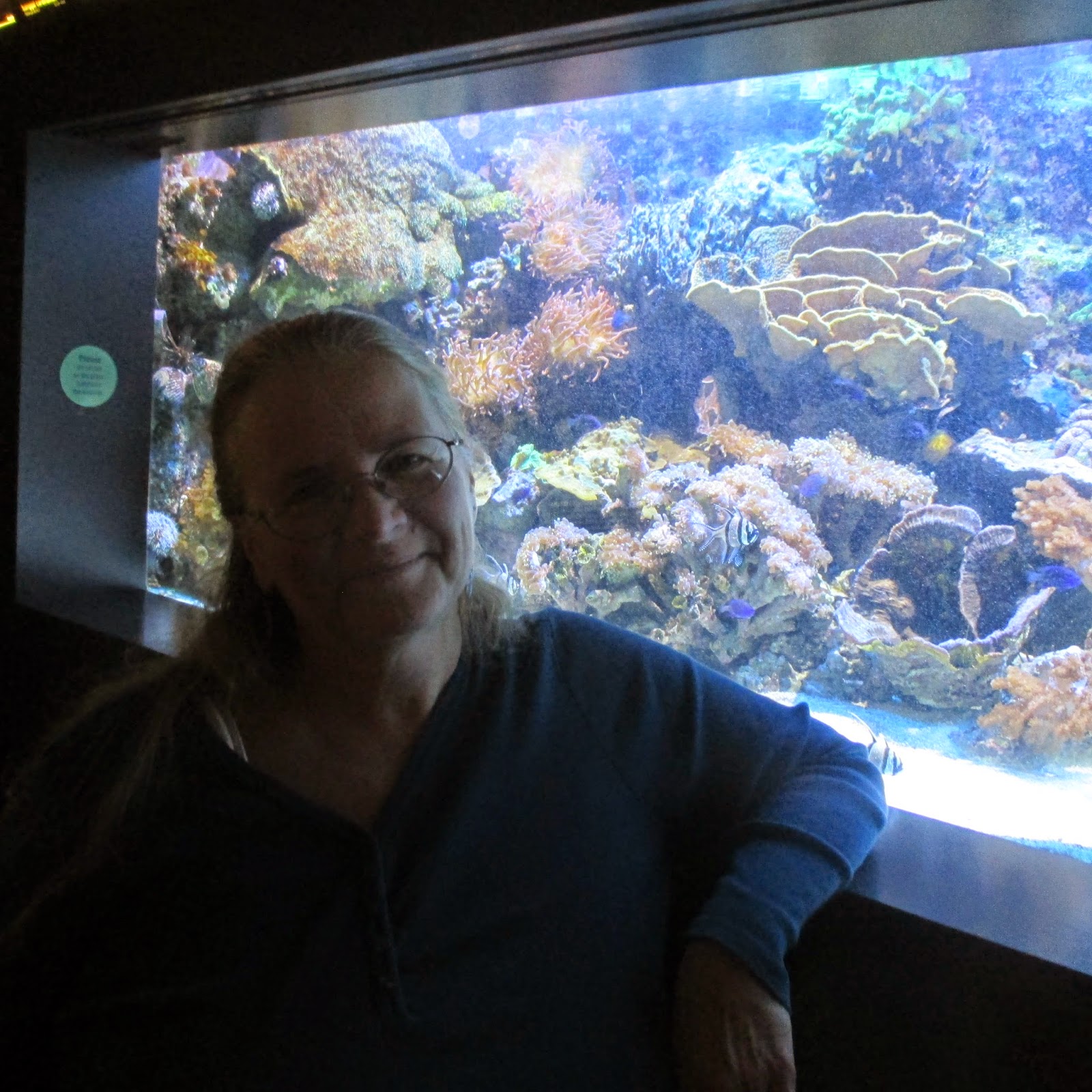 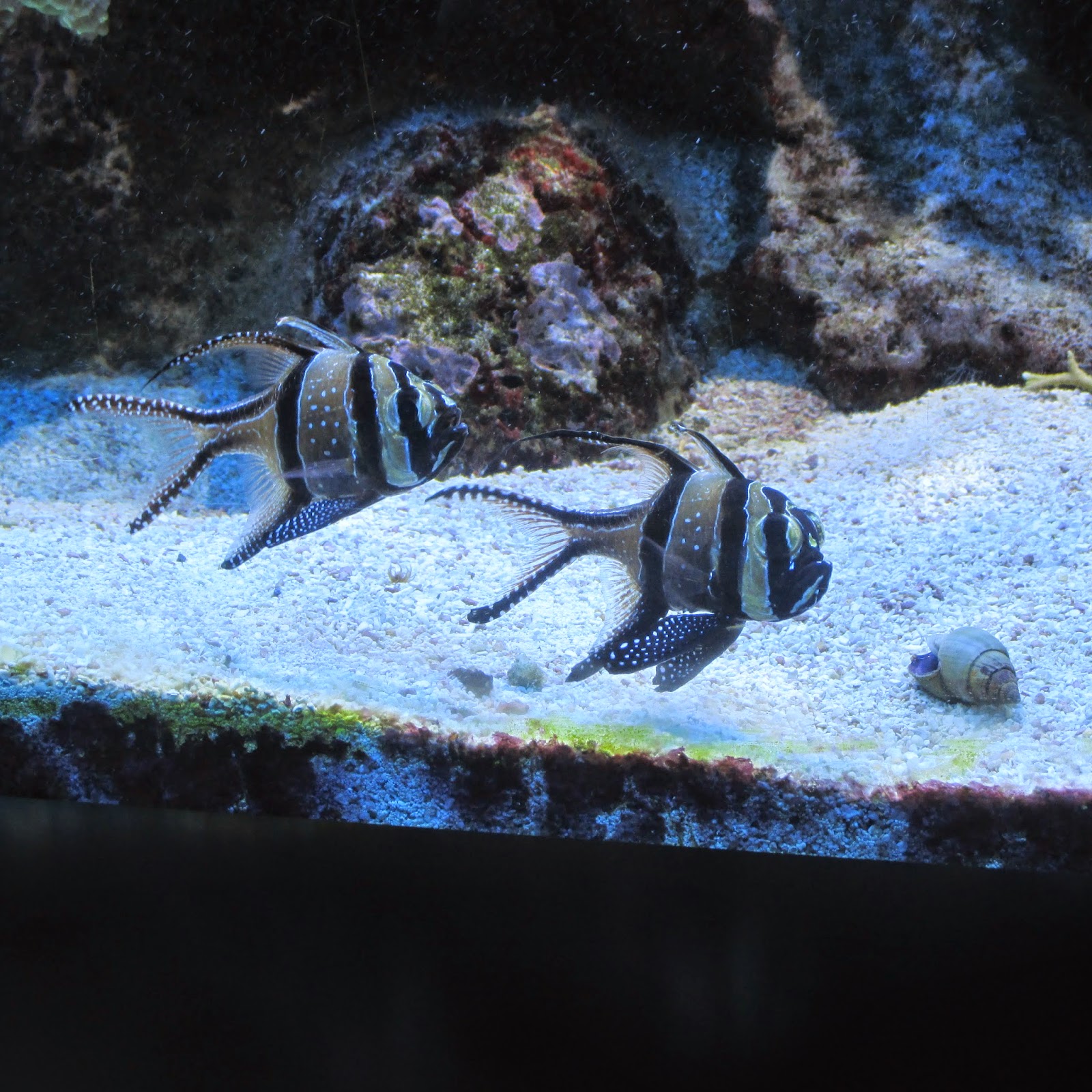 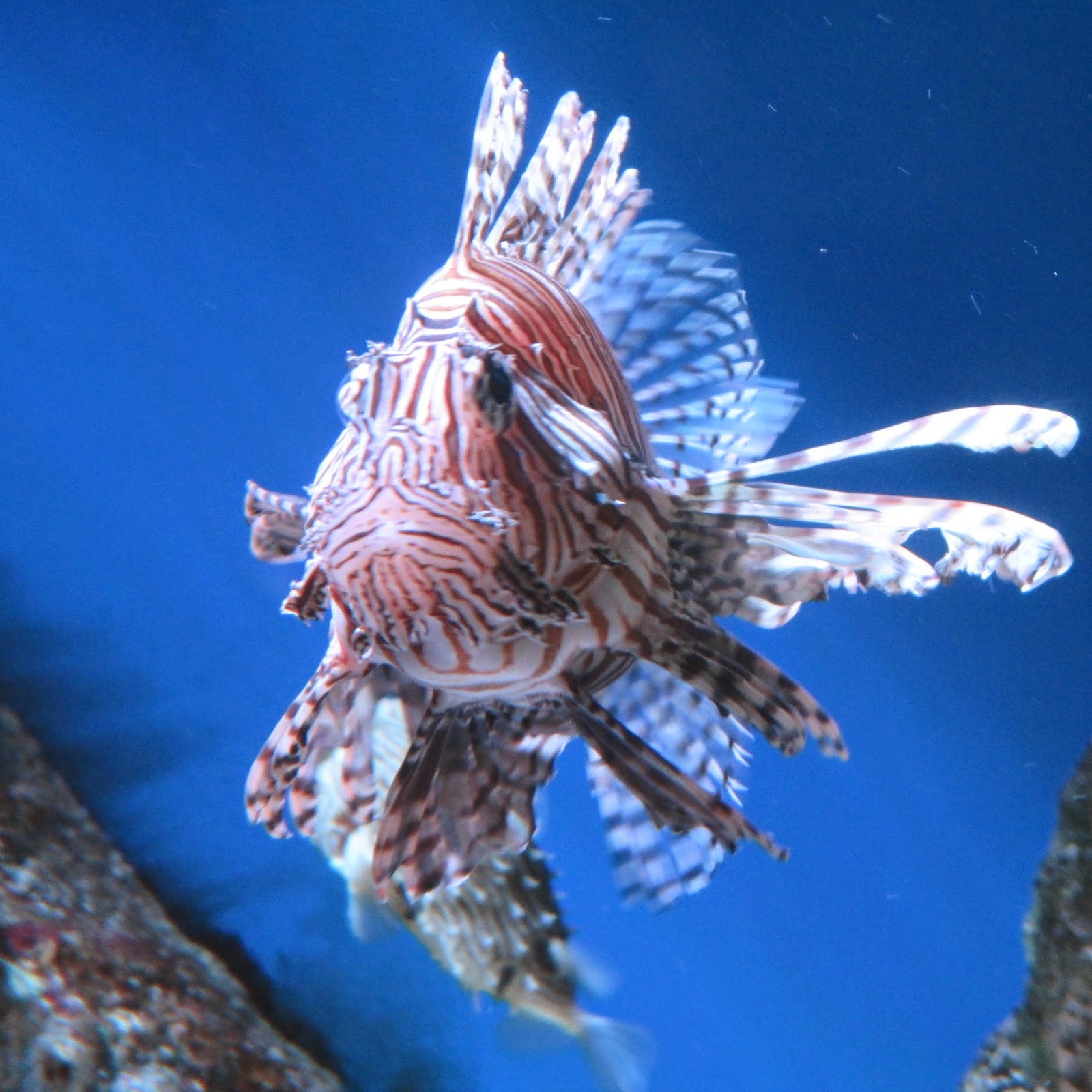 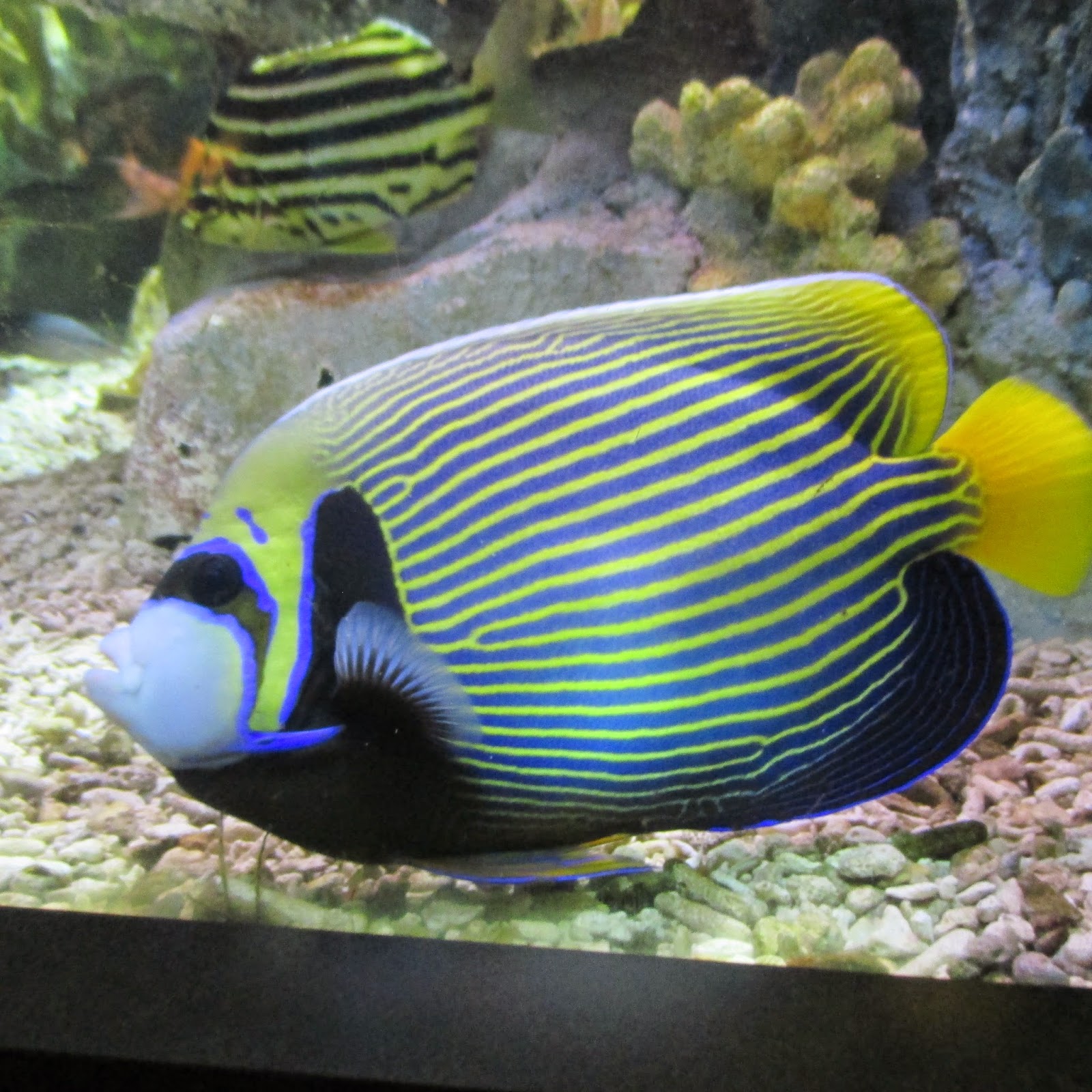 My favorite, of course, is the penguins.  We probably have about a million penguin pictures by  now but we just can't help ourselves. 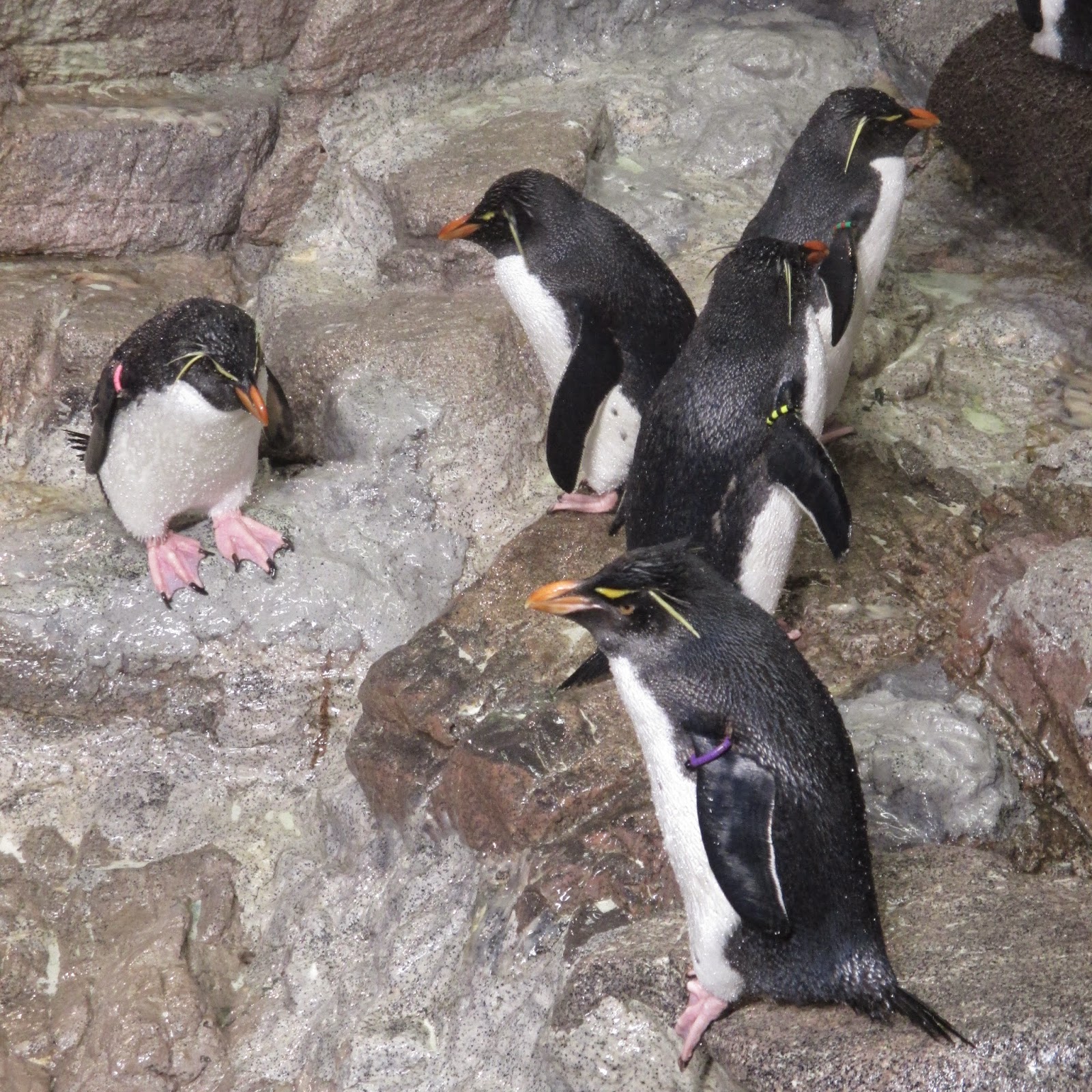 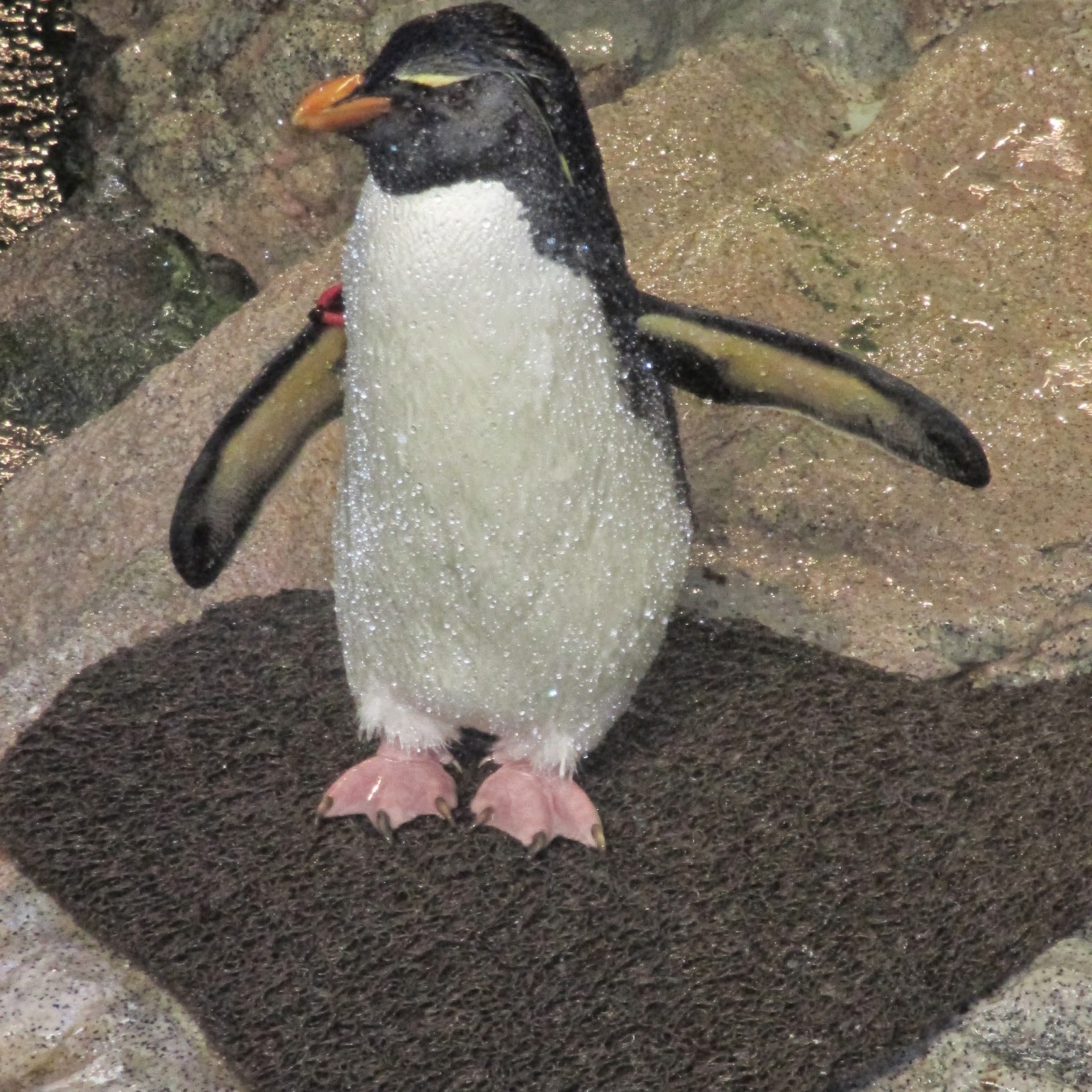 Outside is the pool for the seals. 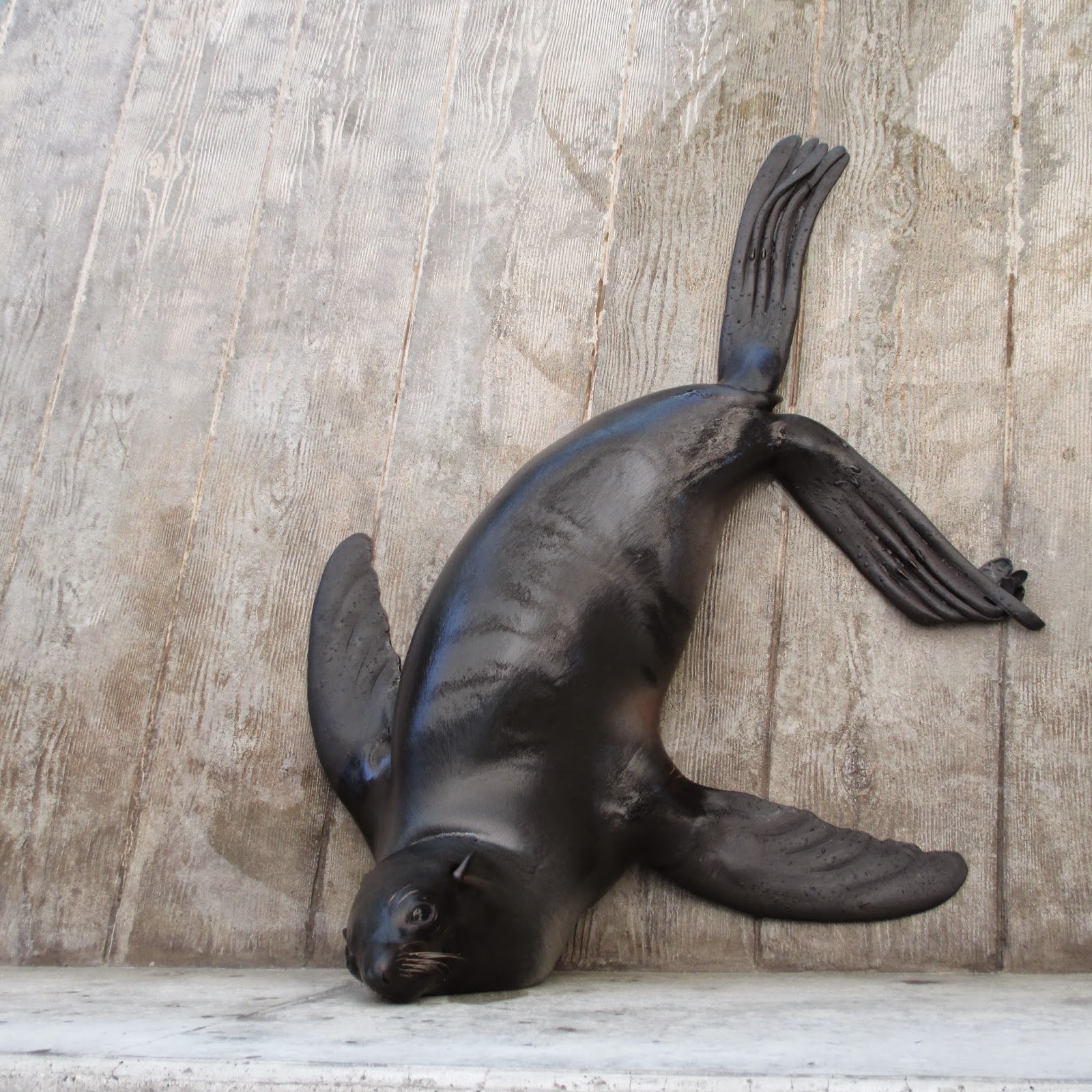 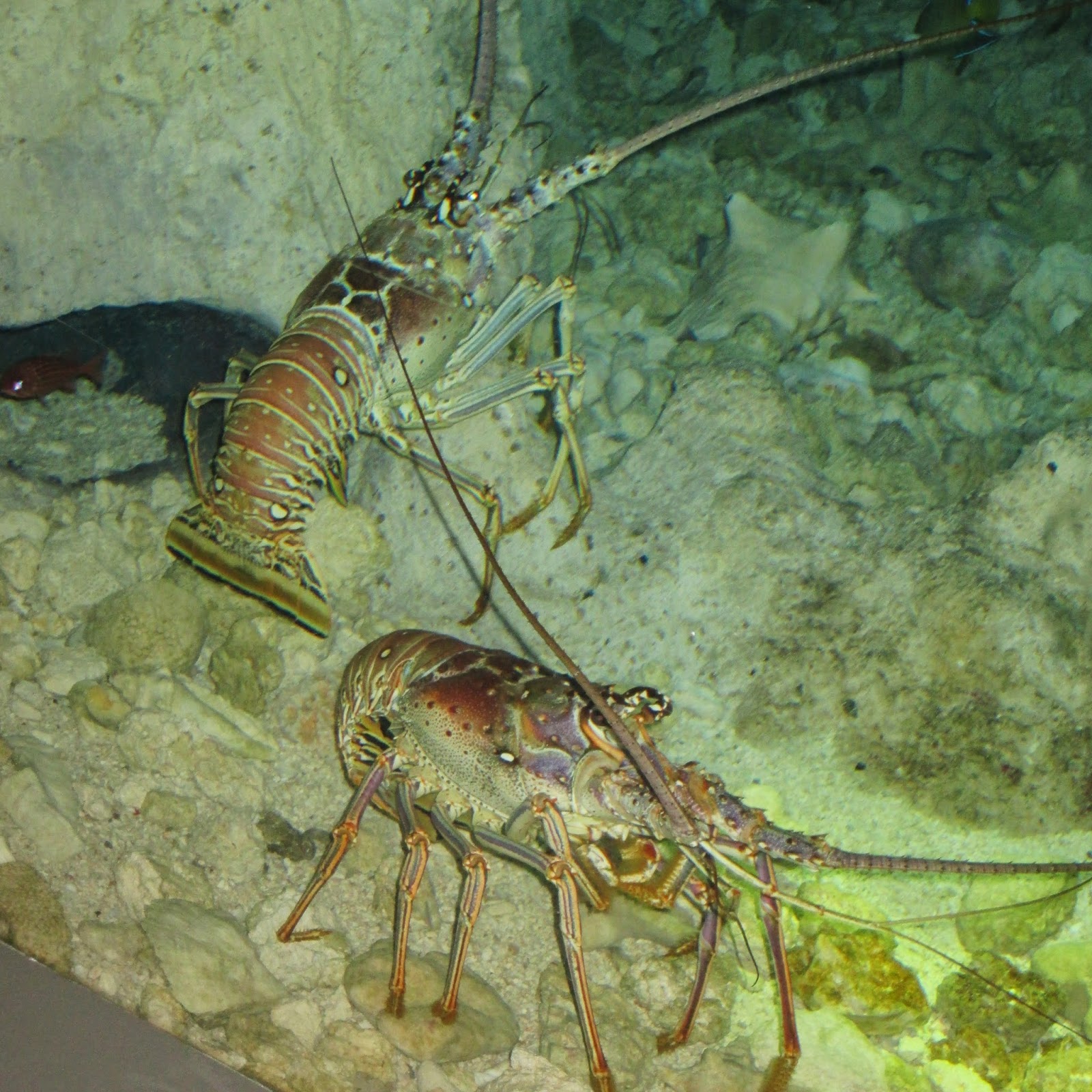 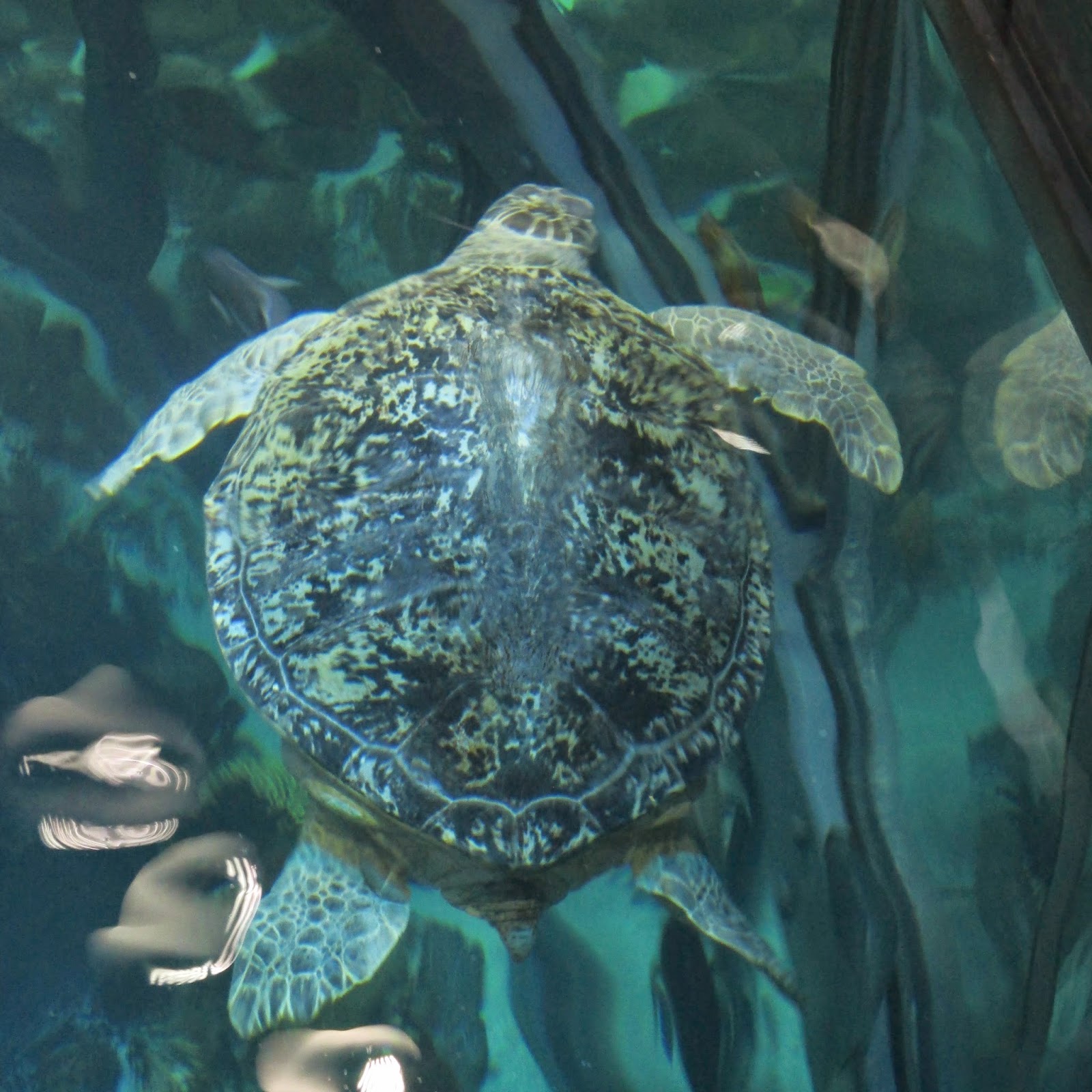 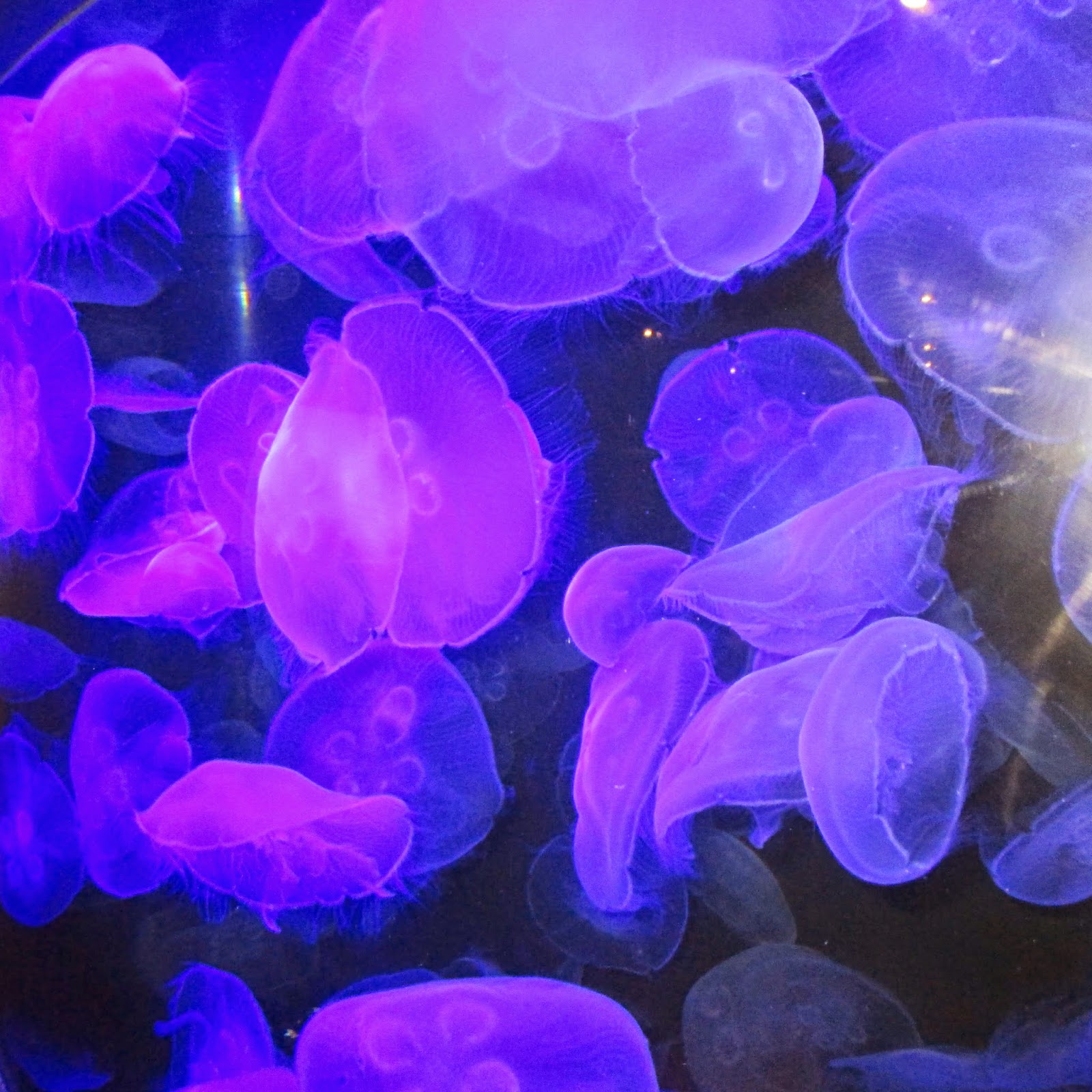 Our next stop was the Boston Public Library.  It's a building that Hubby has always wanted to visit.  The architecture was beautiful! 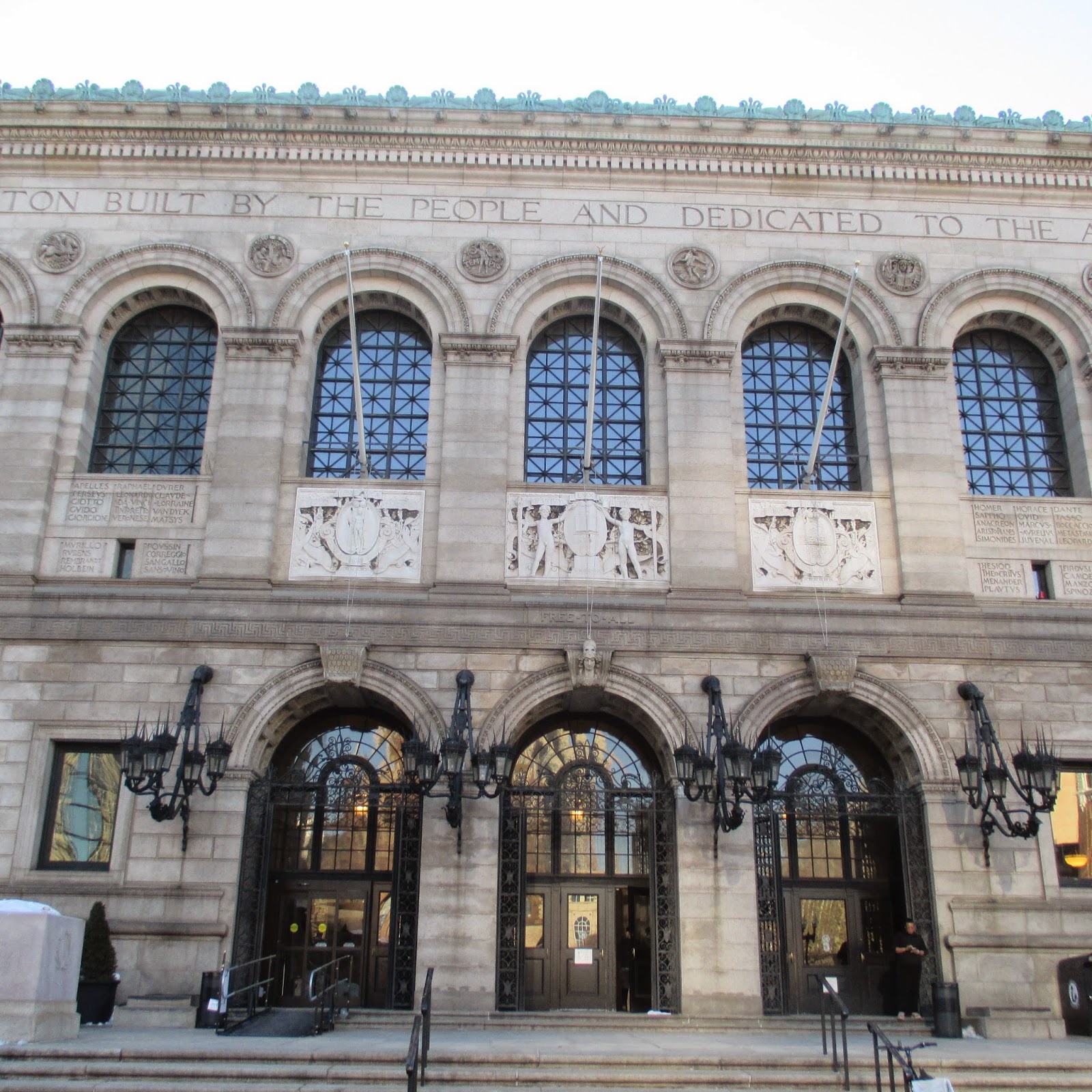 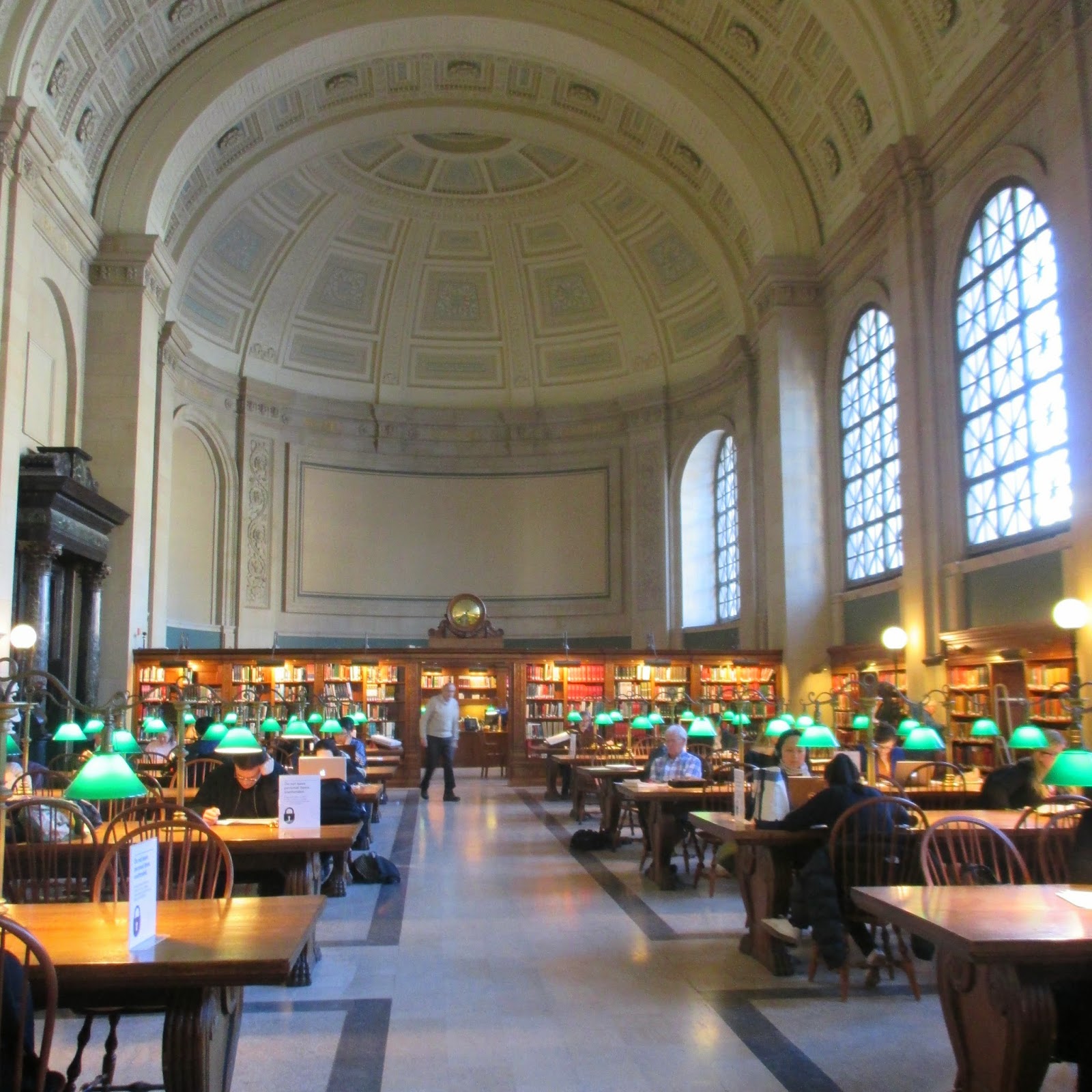 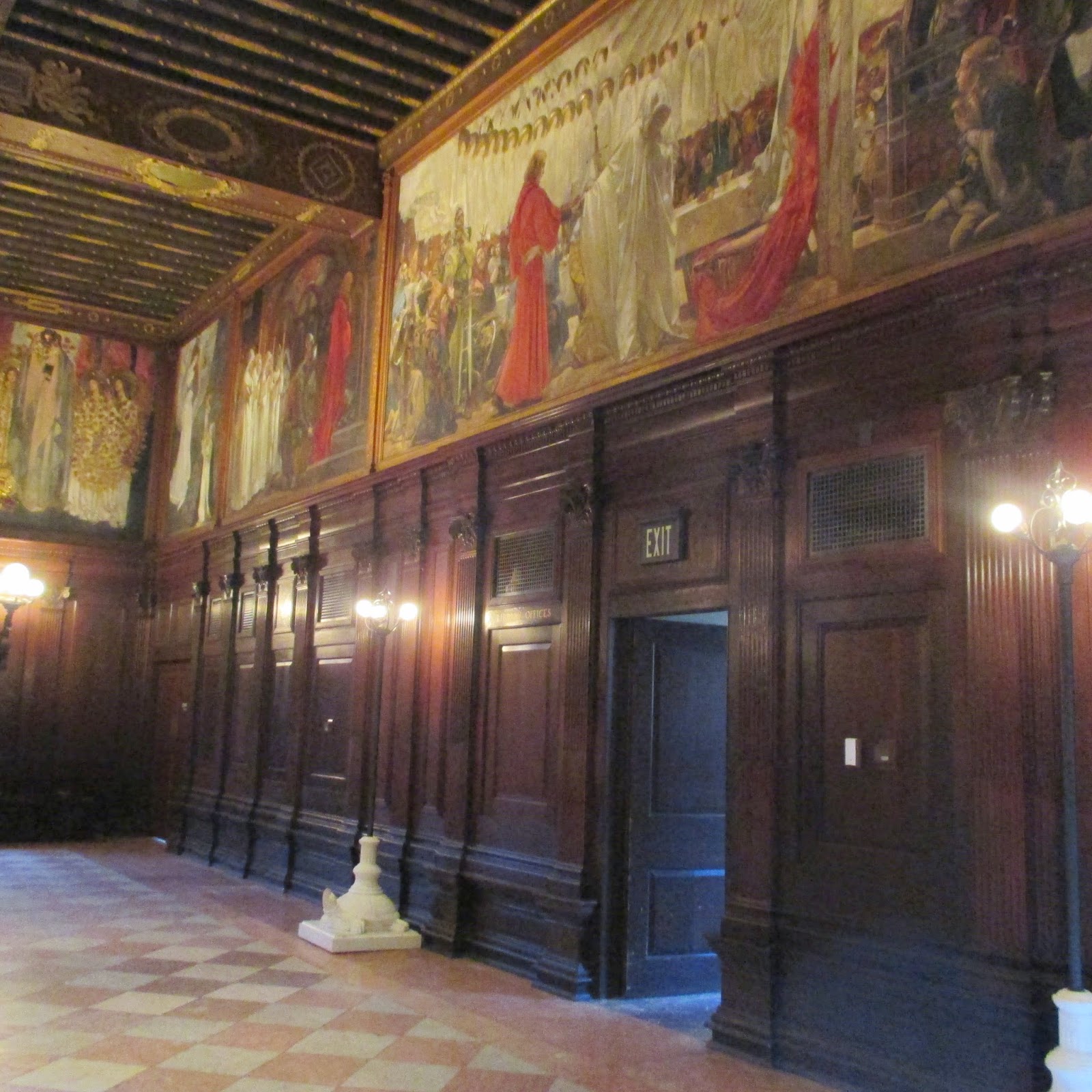 We thought a couple of these lion statues would look great in our front yard! 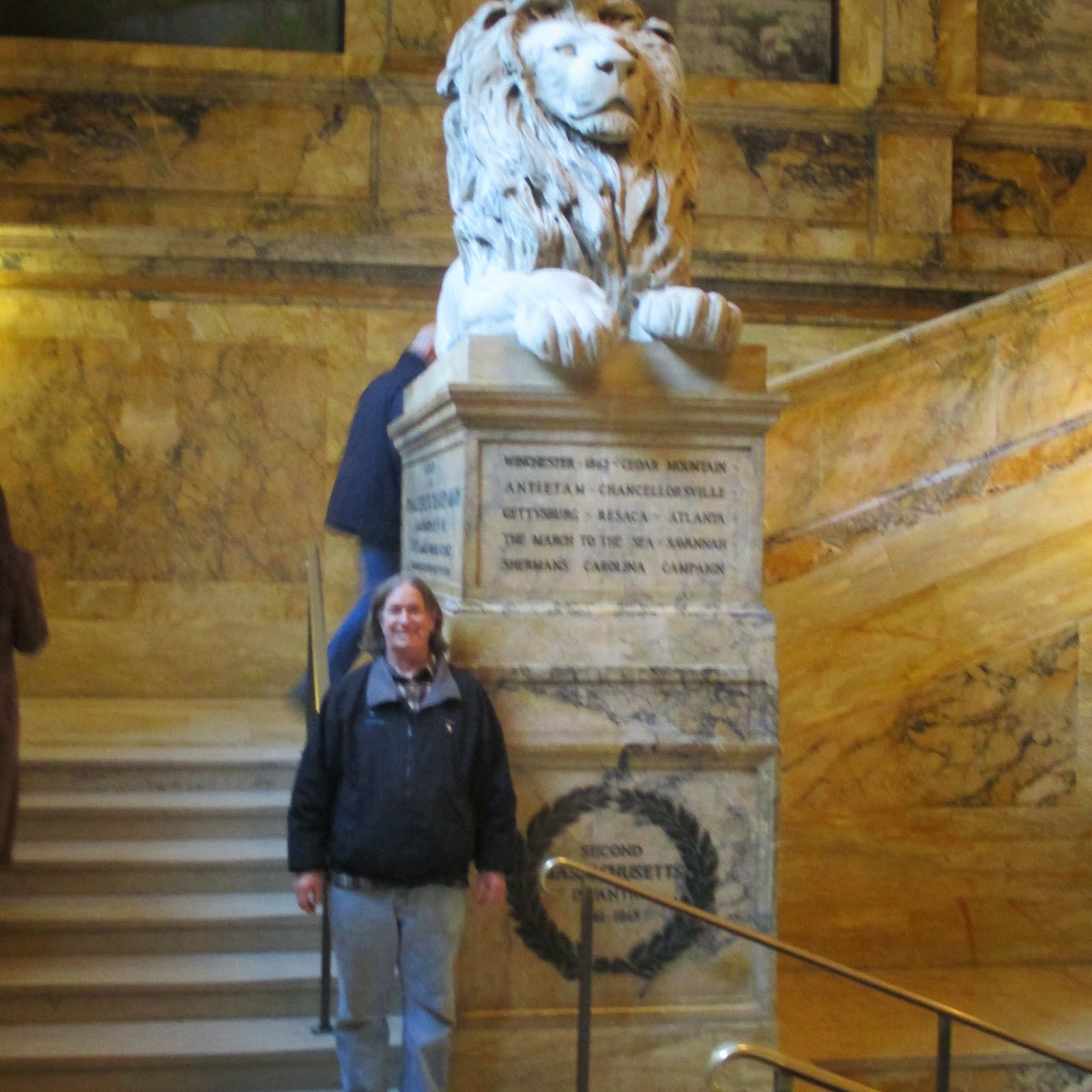 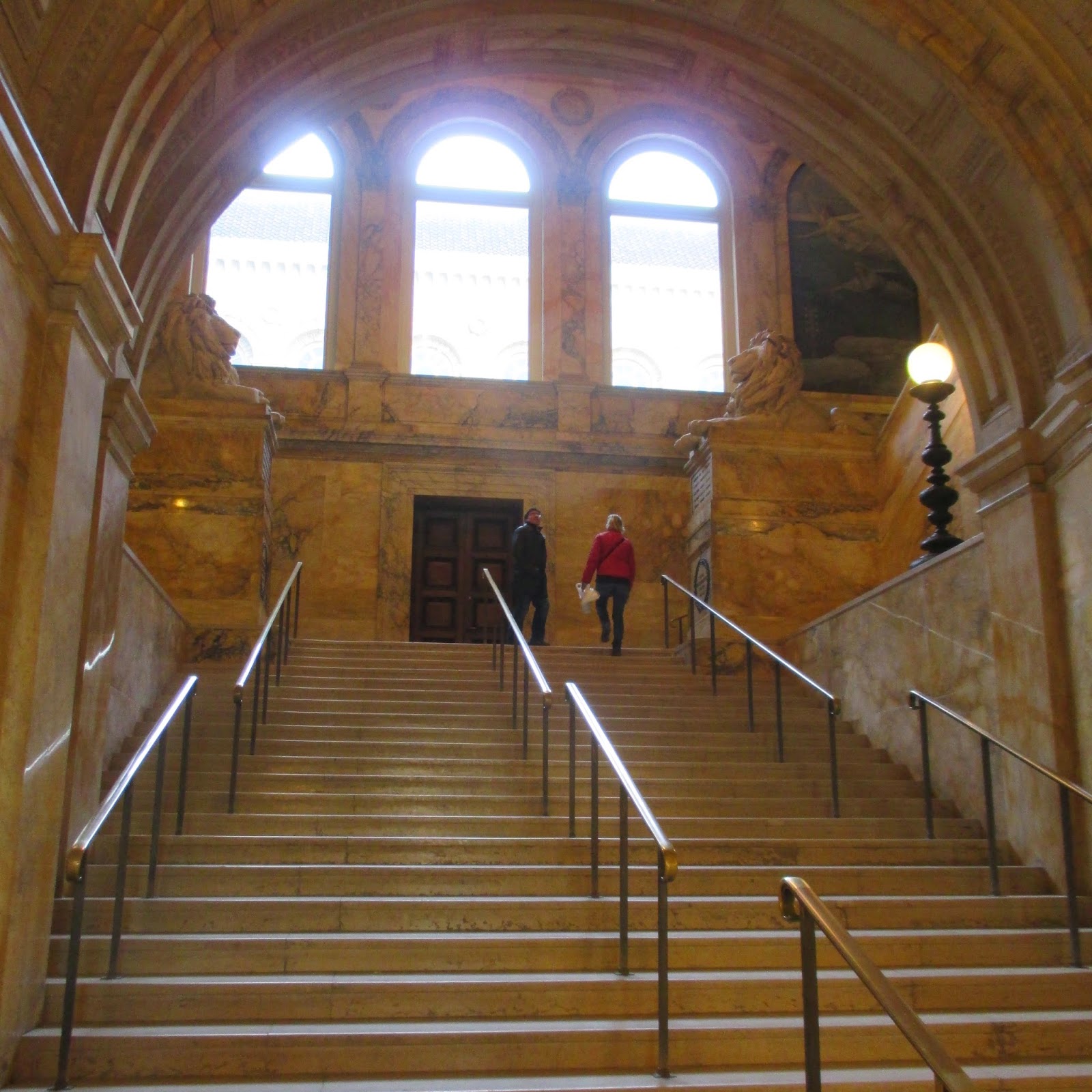 And finally we visited the Museum of Fine Arts.  Neither of us had been there in years...it's huge!  We didn't see all the exhibits but the ones we saw were awesome! 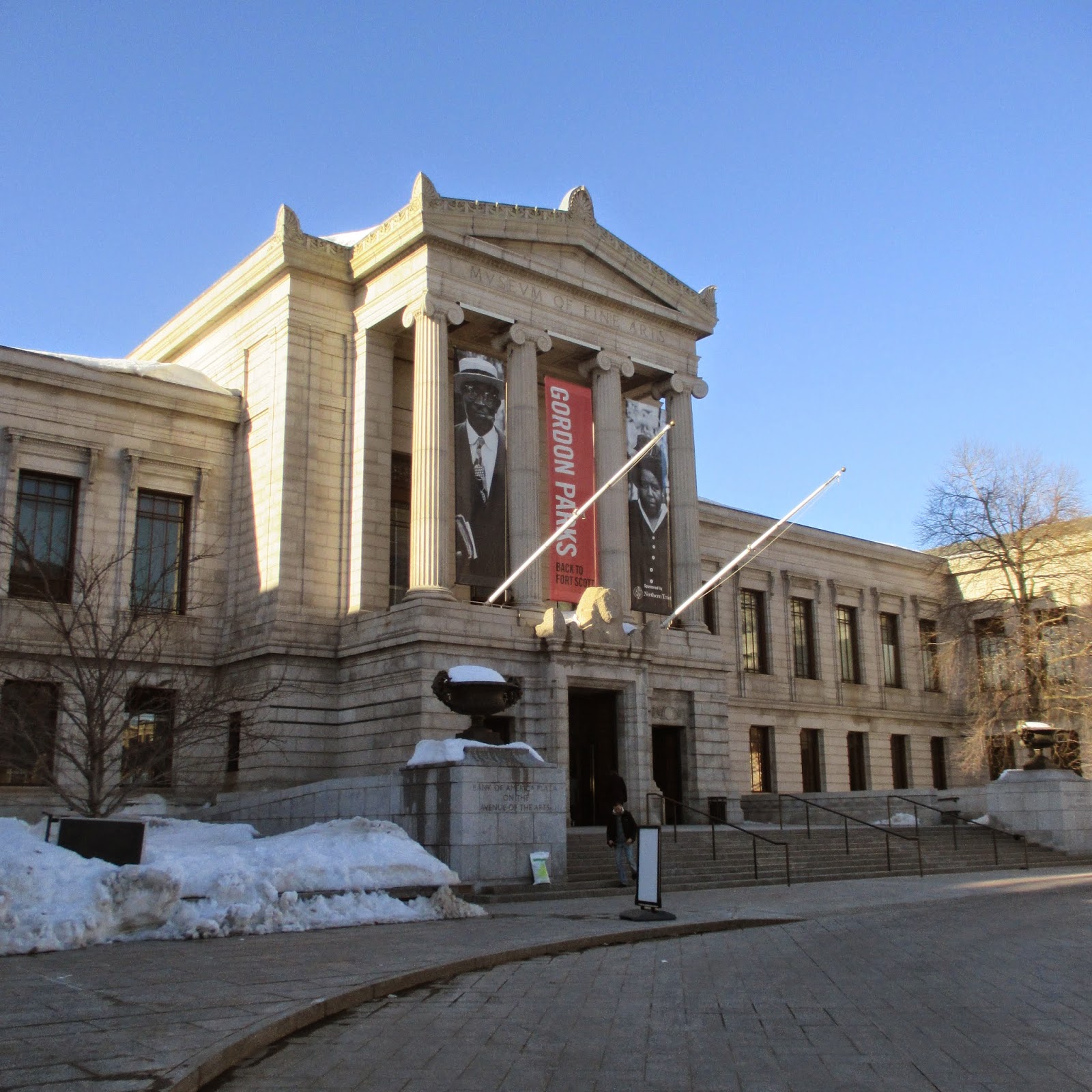 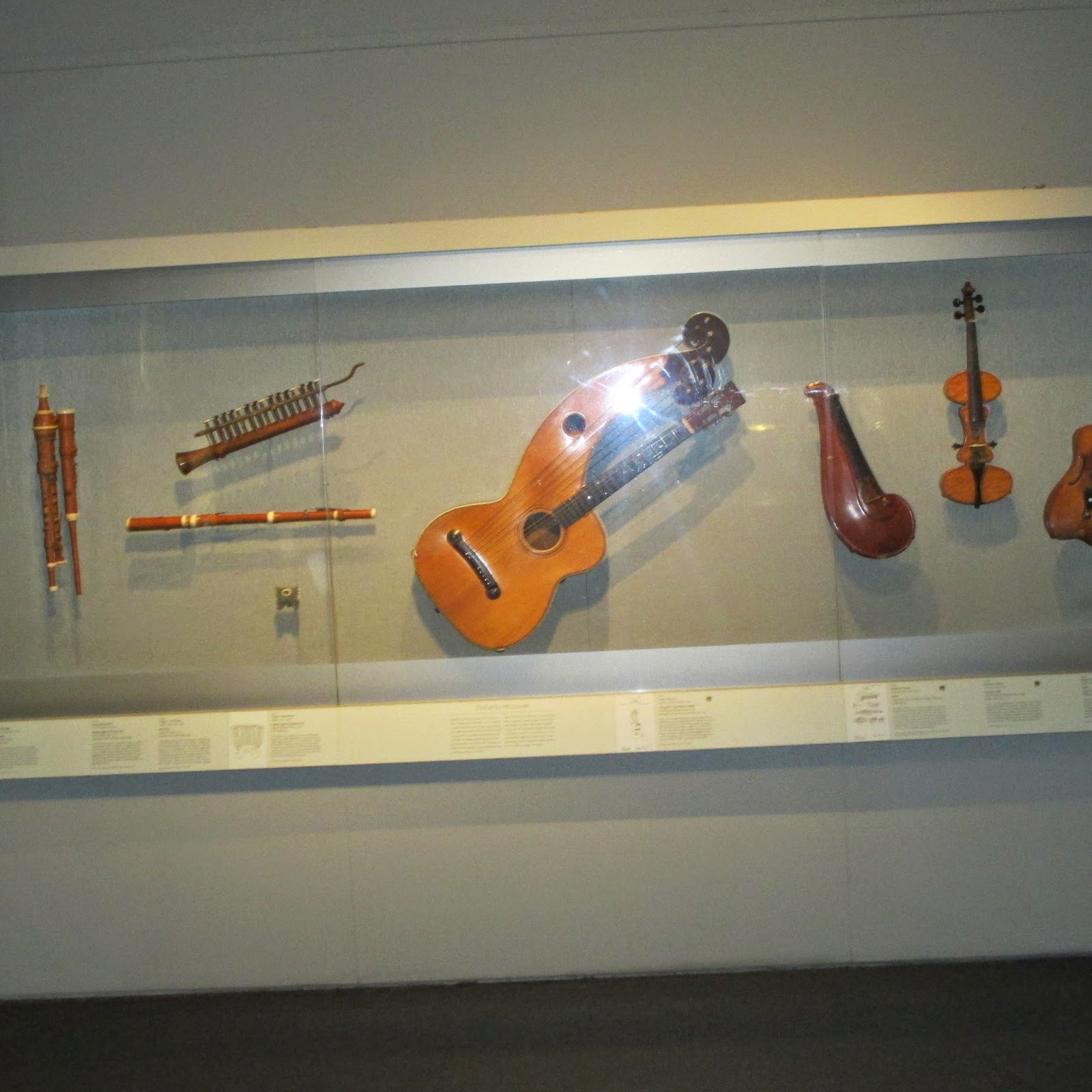 This statue made me sad when I read the story behind it.  It's actually a baby cherub escorting a baby up to heaven. 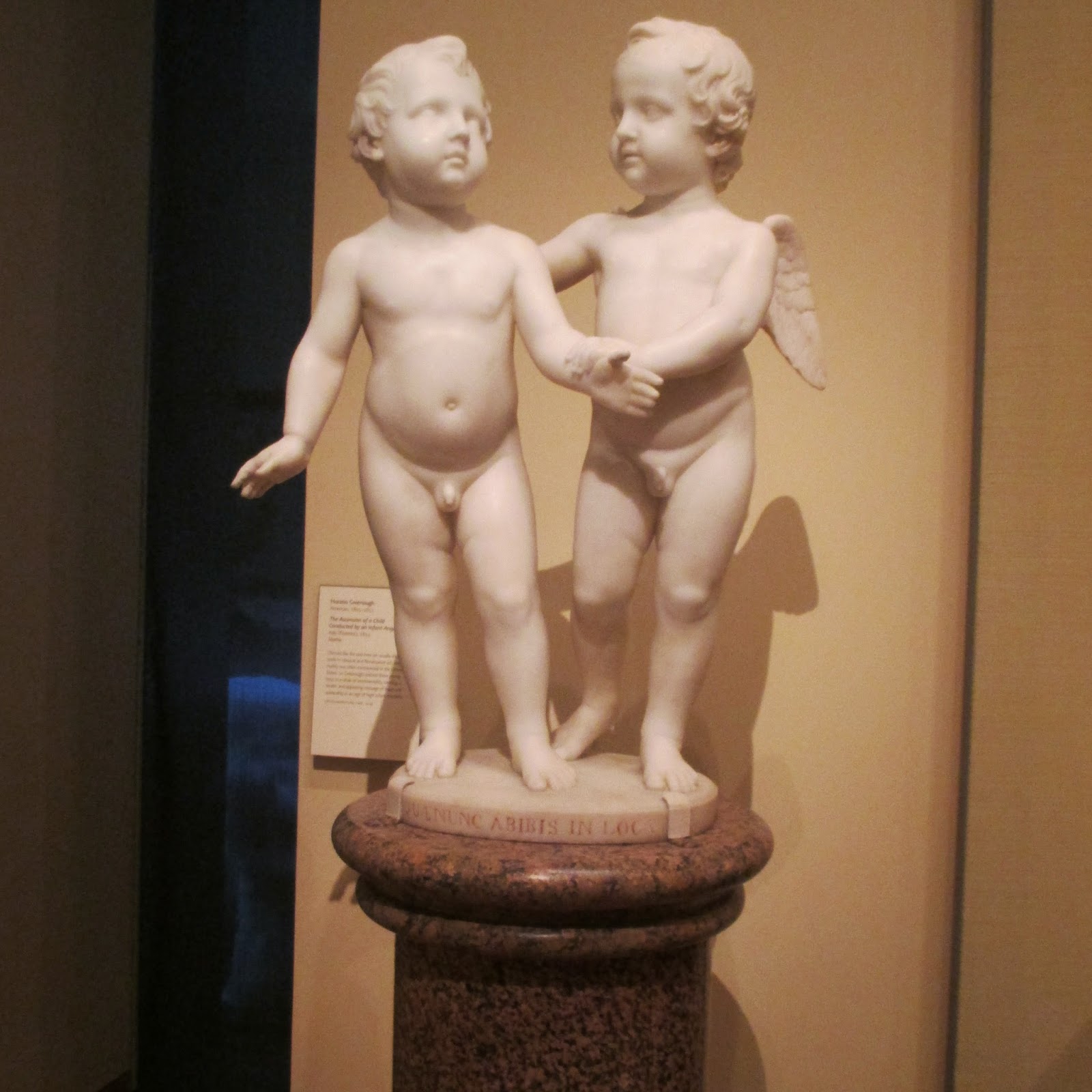 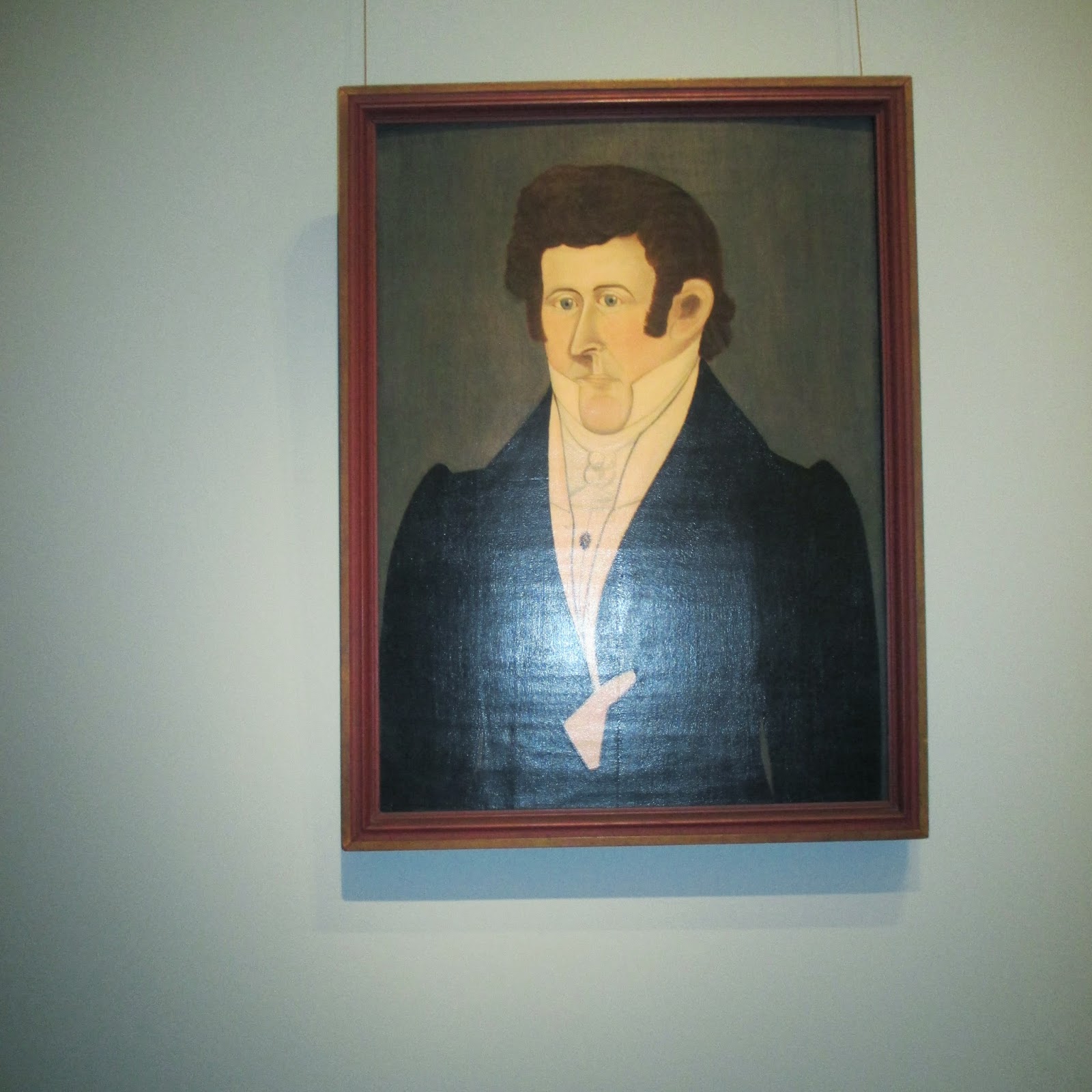 And our tradition has become finishing off the day a the Cheesecake Factory!

We got our Aquarium and Museum of Fine Arts passes at the library.  We still had to pay to get in, but not as much.  And we had a gift card for The Cheesecake Factory that paid for about half the meal.