I had the great good fortune of bringing some "newbies" to the latest Recycled Percussion show.   We went to the Palace Theater in Manchester and got our usual seats in the right-hand balcony.  We were practically on top of the stage!

I gave tickets to my niece Laura, my granddaughter Emily, my daughter Jamie and her boyfriend Sean  It was so much fun to see their reactions to seeing the show for the first time.  Jamie has Justin's daughter Bo in her preschool class, and Bo and her sister Blake were there, at stage left, throughout the show.  We could see them from where we were sitting and laughed as they sang and danced all afternoon to their Daddy's band!

Justin, Ryan and Matt performing with incredible precision on the buckets and barrels "we got at Lowe's"

At times, Justin's hands were moving so fast they were blurs!

They have a wonderful, unique way of finding music in everyday things.  Here they are playing blenders!  Again, the amount of practice must be incredible to have perfectly synchronized sounds come out of a bunch of blenders!

A little hydraulics and they are tipped over so everyone can see the tops of their drums while they play.

And their most memorable trick....play on ladders as they climb up and down and then jump from the top to the floor while playing on the way down!

My family knows how much I love the band...not just for their showmanship but for their humanitarianism.   So Jamie got me a Recycled Percussion and Chaos and Kindness sweatshirt in pink......and my husband got me the same sweatshirt in black!

Way over on the left are the four signatures from the band.  We got to quickly meet them after the show, as they greet all their fans after every show.

After the show we all went out to a pizza place called 900 Degrees.  It was wonderful to spend time with some of my very favorite people!  Thanks for a wonderful night of great fun!

Our Birthday Adventure for Elise this year was a visit to Build-A-Bear!  She invited along her sister Audrey for some extra fun.  Although, I did have to laugh......while in the car on the way, I asked what animal they were going to choose.

Audrey piped right up with, "I'm getting a cat.....are you getting a cat, Elise?  I think you should choose a cat."

And Elise's answer was.  "I'm going to choose for Audrey not to pick my animal for me!"   Quite the outspoken 3 year old!

Our helper at Build-a- Bear, Carter, asked if we had a special occasion, and when we said it was Elise's third birthday, he brought out the crown, a sticker, and a cardboard birthday cake prop so we could snap a photo.

It took a little deciding, but Audrey picked a cat (as predicted) and Elise chose a sparkly purple bear. 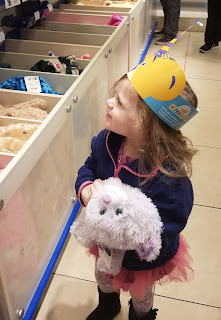 Time to go over and fill the bears up with stuffing.   Elise (AND Pepere) found the machine very fascinating.

Carter held the bear while Elise stepped on the pedal to make the machine work.

Carter checked with Elise to make sure the bear had the right "stuffiness". 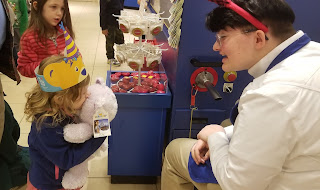 Audrey's turn to squeeze her cat and make sure it's just right.

Now it was time to shop for outfits!

And don't forget the shoes!

After the bears were properly dressed, we were able to make "birth certificates" for them.   Audrey's cat was named "Kit" and Elise's bear was named "Anna".

There was a small playground inside the mall....so the girls played for 20 minutes while Memere and Pepere sat on the "grandparents' bench" and rested!

Finally, a visit to Friendly's, where Elise literally ate JUST the cheese off her cheeseburger before eating up all her ice cream dessert! 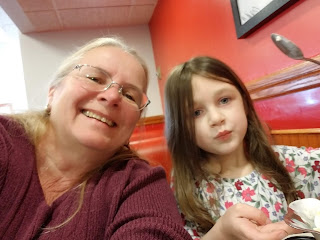 An orange tongue made out of an M&M is pretty funny!

We were happy to bring home two tired little girls......and go home for naps ourselves!