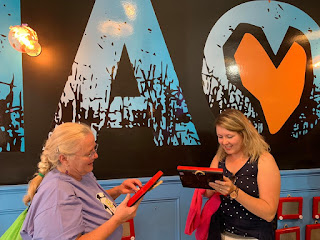 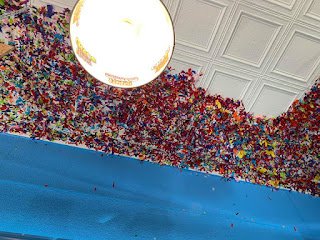 Our Sunday Adventure for this Labor Day weekend was a trip to Colby Sunflower Farm in Newbury, MA.    It was a beautiful day and we had a fabulous time walking amongst all the beautiful flowers!

Every once in a while was a flower that stood out among all the rest. 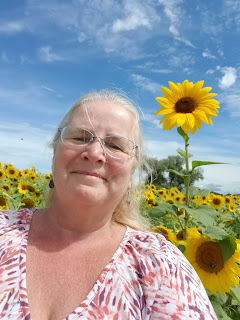 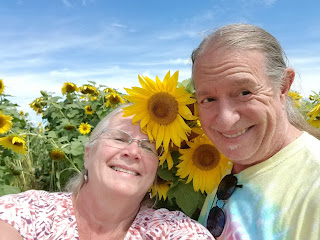 Hubby waited patiently like a good boy for his turn on the tractor! 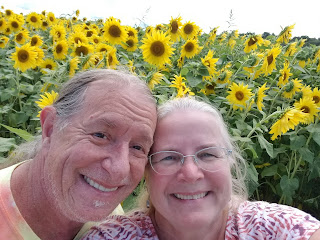 They also had fields of corn and I finally got the answer to my question of how they harvest all that corn.   I really wanted to hang out behind the truck and pick up the ones they missed!

A couple of campy photos at the store.....this one seemed made for us. 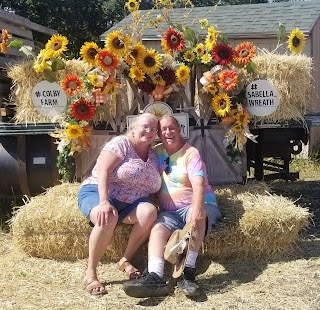 From Newbury we were just a hop, skip and a jump from Newburyport, one of Hubby's favorite places.   We always have to stop in the junk store...........er.......Marketplace so Hubby can check out the latest used records.

And the boardwalk is always a great place to sit and watch the world go by.

Then just a smidge further north to Seabrook for MY favorite part of the day!   A fisherman's platter with a side of onion rings and rootbeer out on the deck.....life is good!!!! 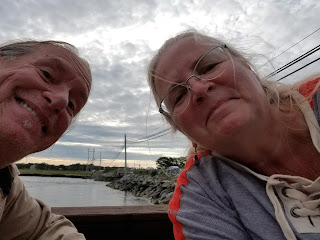 Hubby and I took a short vacation to one of our favorite places.....Boothbay Harbor, Maine!

Our first stop on the way up was the Coastal Maine Botanical Garden.  We've been there a couple of times before, but always good for another look!

They're doing lots of updating, but the areas that have been there for awhile were covered in flowers.

It was a hot day, but there are lots of nice benches to relax and enjoy the beauty. 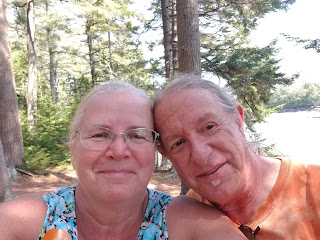 After our stop at the Botanical Garden, we made our way into downtown Boothbay Harbor to our hotel, "The Fisherman's Wharf Inn".     I was very excited to be right on the harbor, with a balcony and a view.

When we got there, we were told that a "big-ass" boat was parked right outside our room. I was pretty perturbed until we got to the room and I could see that the boat was not blocking our view.   And it turned out to be quite amusing to watch the two deck hands spit-polish everything from the outside of the boat to the anchor!

For dinner we sat out on the deck at Mc Seagull's and shared a fisherman's platter. Yum!

The next day we had some time in the morning to walk around downtown.  So we went to Hubby's favorite "60's Hippie Store"  Enchantments.

Hubby always joked around about doing a puzzle of the cover of the Beatles "White Album".  Sure enough, it was in the hippie store!!    Hubby was not quite crazy enough to buy it.

It was time for our Cabbage Island Clambake!   It started out with a 1-hour harbor cruise.  So wonderful to stand at the railing at the top of the boat and enjoy the sun and wind! (Yes, my hat stayed in my hand....I'm not losing another one!)

Cabbage Island has been a family business for 60 years.  Every summer for 12 weeks they offer a cruise and clambake every day and 2 on each of the weekend days!

They start you off with ice tea and water, then bring you cups of clam chowder.  Then the bell rings and it's time to make your way down to the waterfront where they have been steaming our meals all morning.

We each got 2 lobsters, steamers, corn-on-the-cob, potato, onion and an egg!  (and lots of melted butter!)   Apparently, the onion is a family tradition, and the egg is what they use to gauge if the lobsters are cooked!

The meal was finished off with a piece of Maine Blueberry Cake.

After the meal we had about an hour to wander the island.  They had a bar to purchase beer and wine, and games like cornhole set up for people to play. 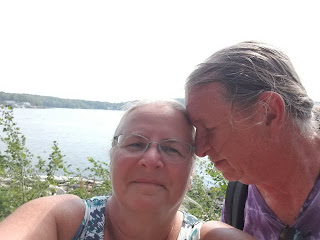 The name of the boat is the "Bennie Alice".....named after the matriarch of the family who is 98 years old and greets all the visitors as they come onto the island.

No supper needed that night!  But of course we had a little snack of ice cream before going to bed.

Hubby noticed there was an open mic, so we decided to go in and have a drink and listen.  Well......let me just say the open mics we go to around here are about 1000x better than this one.  'Nuff said.

In the morning we decided against the hotel breakfast and went to the Bridge Street Cafe. Yummy!

After checking out of the hotel, our plan was to head further north to Union, Maine, home of what Hubby called the "Moxie Museum".   In reality it is the Matthews Museum of Maine Heritage, which has an extensive Moxie display.  And we figured since we were up that way, we'd go to Camden, since we've never been and we've heard it's very nice.

As we were leaving Boothbay, Hubby said, "Gee, I hope they're open today."   I looked it up on my phone and it wasn't!   It was closed on Sunday, Monday and Tuesday.   Thank goodness we checked before drving almost an hour north!

So sadly we headed straight home.  I guess the Moxie Museum and Camden will just have to be an adventure for another day!