Hubby and I like to take our grandchildren, and our niece Laura, out for a day of adventure for their birthdays, rather than give them gifts.  This year, Emily's gift for her 6th birthday was a trip to Canobie Lake Park.

A short side-story..........we actually remembered to bring the camera.  When they did our "bag check" at the entrance, the full-of-himself power-hungry "guard" said we had too many snacks.  "Only one snack per person is allowed".   So Hubby had to return to the car with some of the snacks (although many of those snacks made an illicit return trip into the park via his pants pockets) and he inadvertently left the camera with the snacks in the car.  Since he'd already gone to the car twice, (he forgot to bring the keys the first time) we decided to just forget the camera.   So here's the one photo he took before we went into the park: 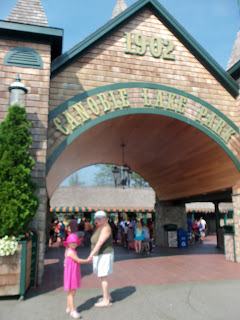 The picture quality is not great, but I wanted you to  note the snazzy outfit Emily is wearing, including a pink straw hat.  She needed a straw hat since "that's what Pepere always wears".

We arrived at the park at 10:54, which I know for sure since we had to check the time and calculate how many minutes until the rides started at 11:00.

We let Emily dictate the day, since it was her special day.   Luckily for Pepere and I, she is just under the 48" needed to go on the big, scary rides, which Emily didn't want to go on anyway since "Only crazy people go on those rides!"    So we hit the Kiddie Area, where they have some nice intermediate size rides.  Not the little boats that just go around in circles ("boring!")  but the Dragon Coaster!!!   By the end of the day, we'd been on that one 5 times!!
Unbelievably, she was also open to trying some rides she'd never been on before.
One was the Boston Tea Party.

She loved it!   We didn't get terribly wet when we hit the bottom, but upon exiting the ride there's a bridge which, if you linger too long, you get hit by a tidal wave of water from the next car coming down.
We lingered too long and I spent the rest of the day with fairly wet shorts.

Emily, however, loved it!

Another ride called the Wave Bouncer strapped us in, went around in circles while bouncing us up and down.  That one she went on twice, once with Pepere and once with Memere.

The Log Flume Ride is a staple at Canobie Lake Park.  Another plunge ride that gets you wet at the bottom. 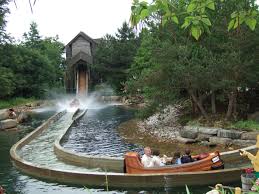 The first time we went on, Emily buried her face in Pepere's back as we started down the big hill, so as not to get her face wet.   They snap your photo at that point, and when we went to check our photo, Emily was nowhere to be seen, hidden behind Pepere's back.  So the second time we went on, she made sure she leaned out of the log ride, smiled and waved for an instant before ducking safely behind Pepere again.

Throughout the day we wandered around the park, going on whatever rides took our fancy......sometimes once, sometimes twice and occasionally more than that!   We got some Italian Ice, some popcorn and ice cream and ate our illegal snacks.

The best part of the day, however, was towards the end of the day.  We had negotiated "three more rides" and had checked our map to see which ones we should choose.  On the way over to our first choice we saw Bubble Guns in one of the stores, and we decided to buy her one.

We finally left the park at 8pm (although she would have stayed until it closed at 10!).  On our last ride, we saw all the lights in the park come on, which was "so pretty!"    We ended the adventure with supper at Emily's favorite restaurant, Papa Gino's.

We do these trips with our grandchildren to give them special memories, but this one is a special memory for Memere and Pepere as well.

This summer has not been the best....weatherwise.   We've had more rain than anyone needs (except maybe California...they could probably use some of ours).     We were phenominally lucky to have perfect weather for our trip to Tanglewood, and it rained cats and dogs the minute we got home.

But this weekend was probably one of the nicest weekends ever.   About 80 degrees, blue skies, but no humidity!   So Hubby and I spent pretty much the whole weekend outside.

Saturday morning we both worked in the yard....I weeded and Hubby mowed.  Then we spent most of the afternoon in the backyard reading under a tree.    Saturday evening we went to an outdoor concert of some musical friends.  Then one of those friends invited us to her place for a bonfire.

Nancy lives on a lake, and the scene when we got there was surreal.   It was just dusk, and the you could still see the water but you could also see the lights of houses all along the other side of the lake.  We lit the bonfire, and Nancy and her partner Chris cooked up some burgers and dogs, offered wine and beer, and the guitars came out.   We spent a very pleasant few hours singing around the campfire and cooking s'mores.  (Nancy told us afterward that it was National S'More Day!)

Sunday morning was spent cooking and getting ready for our own BBQ on Sunday night.   I invited my brother, his wife and my niece over for a cookout.  Then my Dad came home from his extended vacation in the Phillipines, so I invited him and his girlfriend Emma over as well.

We had a great time looking at vacation photos, I cooked on the grill, then we lit a campfire and made.......you guessed it.........s'mores!

Last year was Hubby and my first foray into Tanglewood....and we loved it!   As soon as I got the flyer for this year's Tanglewood On Parade, I bought our tickets.   Tanglewood on Parade is a special event where not only do you get the concert at night which features the Boston Pops and the Boston Symphony Orchestra, but you also get music all day beginning at 2pm.

Since Tanglewood on Parade is on a Tuesday night, it made sense for us to take Monday off as well so we could have an extra-long weekend.   I thought it'd be cool if we found something to do halfway there, and lo and behold-  halfway there is Sturbridge Village!

Sturbridge Village is a place where they've recreated a village from New England in the 1930's,  We had been there once before, but really loved it, so it was worth another trip.

Everything is depicted as it was in the 1830's and, since everyone was a farmer, the place begins with a farm. 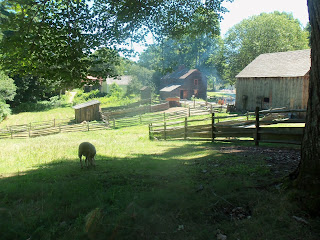 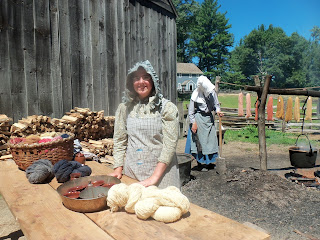 The printer showed us how printing was done back then.  What a long and arduous process compared to writing stuff up on a computer and printing it on your laser printer! 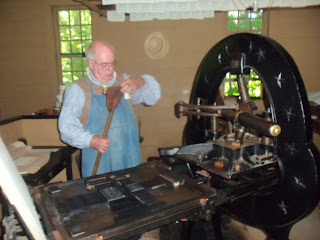 The stagecoach was a good way to get from city to city. 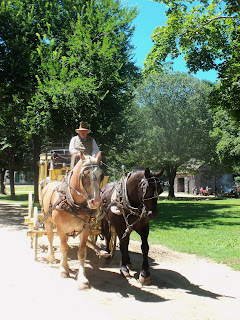 The blacksmith had a tough job. 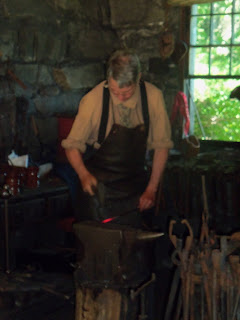 The pottery maker is always the best show in town.  This guy was great with the kids and very entertaining for the adults as well. 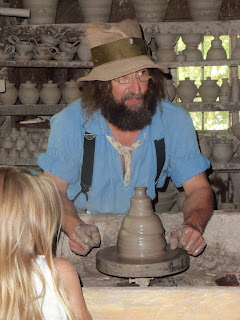 The weather could not have been more perfect...the best weather we've  had all summer!

After Sturbridge Village, we drove the rest of the way to Pittsfield, MA where we were staying at a Best Western  (1 1/2 nights paid for by earning points through my job at AAA!)

After driving around for a bit trying to find a restaurant open on a Monday night, we found "Bubba Louie's", which we entered with some trepidation!  No worries.....the place was great!  Situated in an old brick mill building, it was authentic Italian food.....delicious!

Tuesday we headed over to Tanglewood.......

Hubby finally got to hear a concert out of Ozawa Hall!  We heard a Cello concert, which was actually a lot of fun.  Then we listened to the beginning of a piano concert which was a real snoozer! 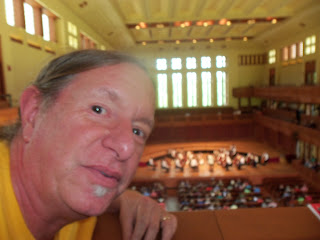 Another gorgeous day, and Hubby and I enjoyed the grounds tremendously. 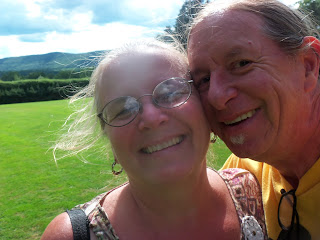 As always, the place was packed, but there's always plenty of "lawn seats".   Last year we were quite amused at the lengths people went to make a "picnic"...with full size tables, candles, tablecloths, etc.  That didn't change our way of doing things at all!  In fact, we forgot our Red Solo Cups and plates, so we had to make do with "stolen" paper products from our hotel!!

Besides Ozawa Hall, we enjoyed a magician  and this Fiddle Band as well. 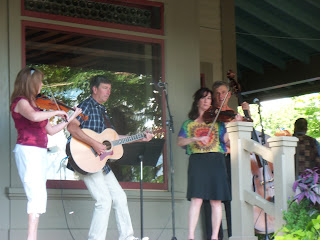 The evening concert was fantastic, with The Tanglewood Orchestra, the Boston Symphony Orchestra and the Boston Pops, which concluded with the 1812 Overture, including cannons!  The night was capped off with fireworks.

And Wednesday we concluded our vacation with a visit to The Norman Rockwell Museum, one of our favorites.  Their special exhibit was the art of the Disney Snow White movie, which was fabulous!
A very relaxing and wonderful vacation for Hubby and me!
Posted by Karen at 4:04 PM 1 comment:

We were lucky enough this past weekend to see all four of our grandchildren....and oh yes, our children too!  When I said out loud in front of my daughter how happy I was that we'd see all the grandkids, she says...."AND your kids!  What are we now, chopped liver??"      SIDE NOTE:   I had always wondered where that expression came from and now I know.  Chopped liver tastes like dirty feet.....I can understand why people mention it in a derogatory way!

Anyway......we started out with Emily's Sixth Birthday Party on Saturday.   Of course she had a pool party and for once our New England weather was nice.  There were tons of kids there, and they took full advantage of the pool and the new swing set. 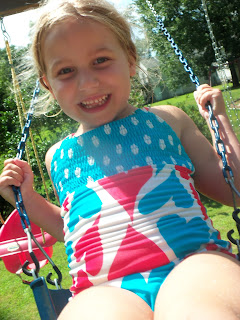 Emily's Nana made her a My Little Ponies Birthday Cake 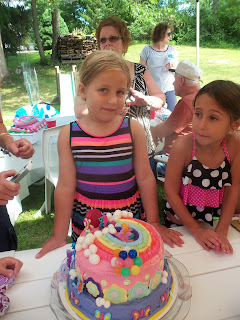 Because I'm such a Memere, I made Emily a new dress for school - and for our birthday adventure with her we'll be bringing her to Canobie Lake Park - God help us! 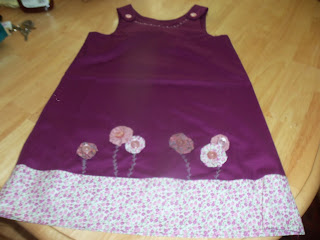 Besides seeing Emily and her family - my son Doug and his wife Kara - I also got to see my daughter Jamie, and of course my son Nick and his wife Kelly and my new little granddaughter Audrey.   Our camera died  before we got any pictures of Audrey, so I'll share this one that Kelly posted of Audrey pulling her own hair! 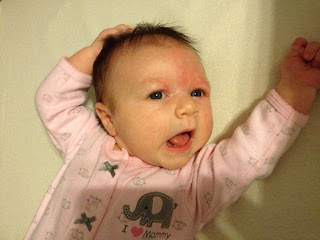 On Sunday, we were invited down to Boston to visit Hubby's son Kenny and his fiance, Matthew.  They made us a delicious brunch and also invited Hubby's daughter Wendy, her husband Allan, and our two grandkids Noah and Elsie.

It's not always easy to get pictures of those two....it took me four or five tries to get this one, and Hubby photo-bombed it! 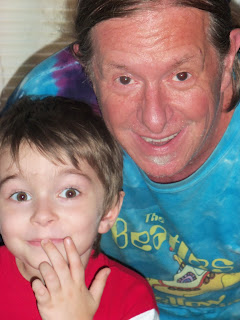 And Elsie's even tougher because she never stops moving! 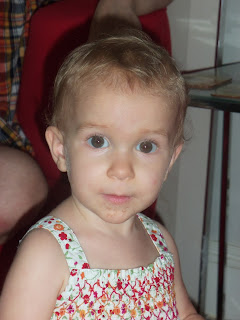 We totally loved spending time with our families......hoping to get all four grandkids to our house on the same day sometime this summer!