And we begin again

It really broke my heart to lose my Elantra.  Her name was Ellie.   As much as I wanted to keep her, going through the process of keeping a car that had been "totaled" by the insurance company would have been arduous and possibly expensive.

So, once again, we went out shopping for a new car.   If there's anything I hate more than regular shopping, it's car shopping.  Mostly because I hate the thought of getting screwed.

Hubby and I spent Sunday driving up and down Route 28 from Salem to Hooksett, stopping at all the little car dealerships and looking for a "deal".

As always, I'm quite appalled at the prices of cars.  For the $4000 self-imposed limit I set for us, there wasn't a lot to chose from.   I'm partial to four door sedans with automatic transmission.  I was surprised at the number of cars that had a standard transmission.  More than once, I thought we'd found a good deal only to see that it had a stick-shift.   That's not for me.  I like to be able to cruise along without having to think too much.

We had seen a couple of possibilities on the way north, and were planning on going back to revisit a couple of them when we stopped in a place and found our car.   She's a Toyota Corolla, blue, automatic transmission.   She has 100,000 miles on her and of course, we paid more than I wanted to.

But she seems like she'll be a good car and hopefully last a few years.  Hubby and I agreed that our "crashing the car days" are over! 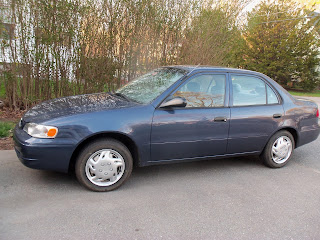 Sometimes it's hard to be thankful....

When bad things happen, it's hard to find the bright side.  In the grand scheme of things, a car accident is not a hugely horrible thing, especially when no one gets hurt.

Traveling down Route 93 yesterday, in the middle of the day in dry conditions, I spun out, fishtailed back and forth across all three lanes and hit the guardrail - facing in the opposite direction.

Terrifying? Yes.   But lucky in so many ways.  Most importantly, no other car was involved in the accident.  The guy in front of me who slammed on his brakes, and for whom I swerved to avoid, continued on his way...probably unaware that he was the reason I was careening across the highway.

Fishtailing across three lanes of traffic, it's unbelievable that no one hit me.  How they all avoided me, I'll never know.

Hitting the guardrail, I managed to smash in both the front and back of the passenger side.  I was wearing a seatbelt, and I was not hurt.  I landed completely out of the lane of traffic, which was another miracle.  I was facing traffic, so anyone unable to stop would have hit me head-on if I'd been a couple feet further onto the highway.

Two cars stopped...both with young people who were anxious to know if I was okay, if I had a cellphone, if I needed any help.   Everyone else just rubbernecked, causing one of those back-ups you hear about on the radio in the morning on your way to work.

When the State Troopers came, I told them I thought the car was drive-able.   They told me if I thought I could drive it away, they'd help me turn it around.  They stopped traffic completely, I turned the car around and was able to drive it home.

It takes some time to get over the shock and the sadness that follows when something like this happens.  I know I need to be thankful for the fact that I wasn't hurt and neither was anyone else.  Right now I'm still sad, and starting to be angry about all the chaos this will create in our life - the insurance, the repairs  - or even worse - looking for a new car. 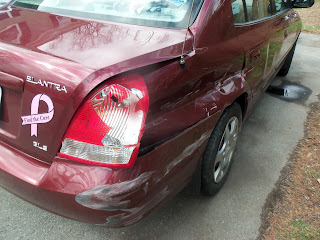 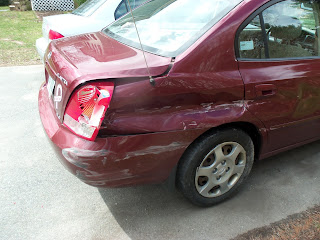 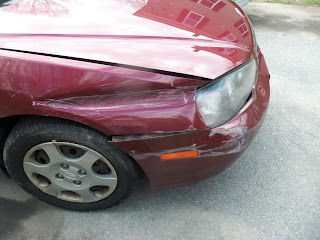 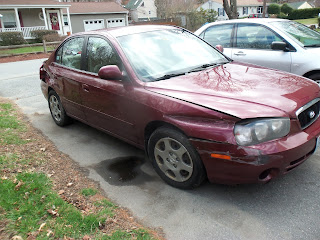 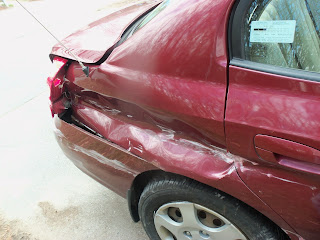