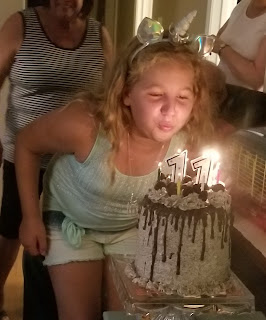 Our oldest grand-daughter Emily turned 11 this year!  Mom and Dad had a small birthday party with just the grandparents, and Emily got to blow out the candles on the delicious Cookies and Cream birthday cake her Nana made for her.

She also got to invite her very Best Friend, Mari. 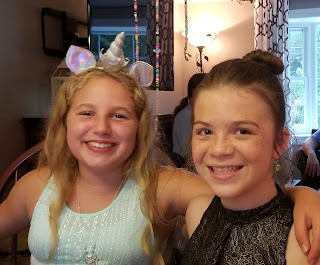 She and Mari are two peas in a pod - making videos and trying out clothes and hairstyles and indulging in all the fun of being a "tween".

For our Birthday Adventure this year I got us all tickets to Blue Man Group!

We drove into Sullivan Square and took the subway to The Cheesecake Factory first - it's both Emily's AND Pepere's favorite place to eat!   Emily was hankering after Chicken and Waffles, but they only serve them for brunch and we were too late!  She quickly decided on chicken fingers and fries.   I was very impressed with her poise and assurance in ordering her own meal.

We walked from the Cheesecake Factory to the Charles Playhouse where Blue Man Group performs.  Before the show started, they handed out flourescent paper to use as headbands - at one point in the show they glowed in the dark. 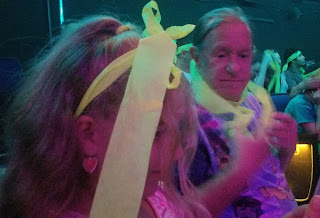 We had to take a quick selfie because there were no photos during the show!
(the guy behind us apologized for photo bombing us, but he really couldn't help making sure he had a nice smile!) 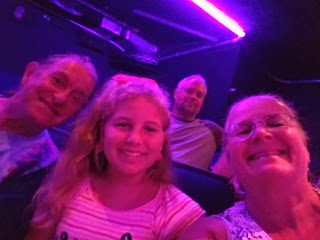 Except this illicit photo  (which Emily reprimanded me for!!) 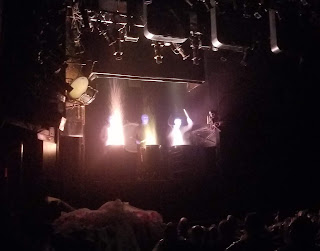 Emily loved the show and laughed her way through it.   Pepere and I enjoyed it just as much as she did!  I had to laugh at one point, when one of the Blue Men was very, very slowly pouring paint on a drum to build up suspense, Emily said out loud, "Just pour it in already!!"

We took the subway back to Sullivan Square.  I tried to get a few pictures of Emily and her very fashionable attire  (three outfit changes before we got there, as well as a long discussion on which purse to bring) but she was being sassy so I only got a couple of good shots. 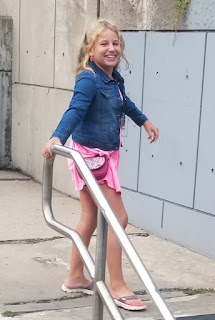 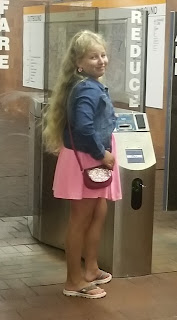 She got her first cell phone about a month ago and I was very impressed with how respectful she was with it. She put it away during the dinner and during the show.   She asked if she could take it out and play a game on it while we were riding back on the subway, and then she offered to let me have a turn on the game.

Another very successful birthday outing.  So much fun to spend time with our wonderful, happy-go-lucky, smart, beautiful and loving grand-daughter!