Last spring, my friend Joan posted that she'd gone to an exhibit on Leonardo DaVinci at her local museum in Cincinnati.  I love Leonardo, so I went on the website for the exhibit and the closest it was coming to New England was Rochester, NY.....in February.   I decided maybe we'd think about a road trip .....although upper state NY in February didn't sound like a great idea!    But I put it on the bottom of the December page of the calendar to remind myself to check it out.

When I flipped the calendar to December, I saw my notes and checked out the website again.  Much to my surprise, they had added a stop at the Boston Museum of Science!  And..... the exhibit was at the Museum right then!

There was no question in my mind that we'd be going to see it right after the holidays.  So in January I got the Museum passes from the library and the date of our adventure was set!   Since I have only one more month on my Aquarium Membership, a stop at the Aquarium was a must!  And when I checked the Marriott website to see if I could get the Marriott Longwharf  hotel  (right next door to the Aquarium) for cheap with my Travel Agent pass..... and it was available!......our adventure was complete!

Hubby knew he had just the right shirt to wear 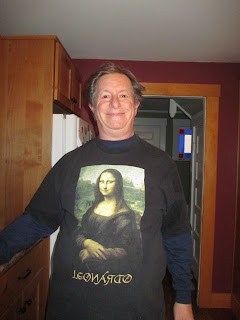 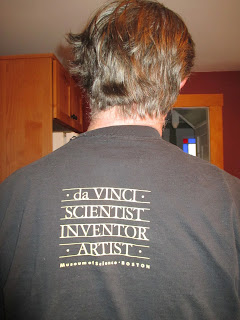 Of course, much to our chagrin, they were predicting a lot of snow and "blizzard-like" conditions for our weekend.  But we never let no stinkin' bad weather stop us!   I found a parking garage just around the corner from the Aquarium, so we parked the car there for the duration and took public transportation....locally known as the "T".

We made the Museum of Science our first stop. 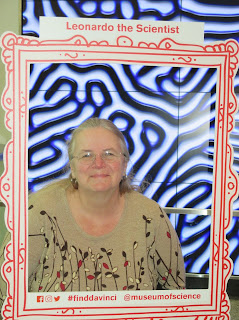 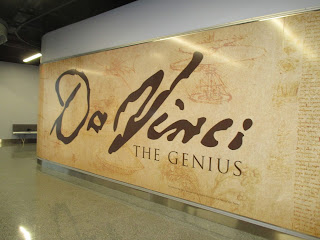 The exhibit was very interesting.  They took a lot of Leonardo's drawings and brought them to life as models. Some were small and some were life-size! 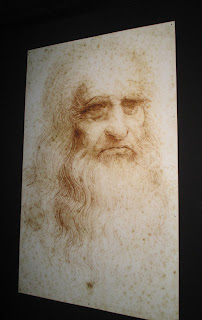 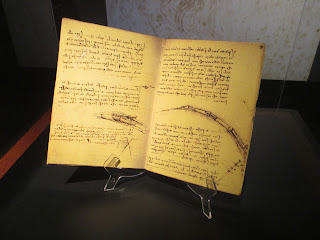 The model for his human kite 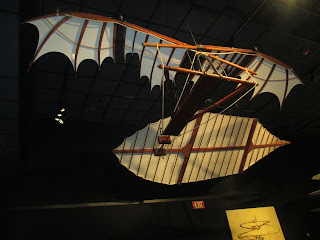 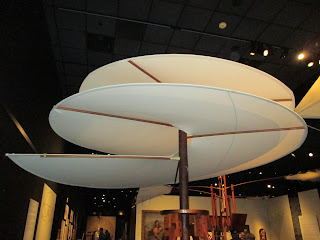 There was a very interesting section on the Mona Lisa....his most famous painting.  They just spent 20 years using infrared imaging to "see" what was beneath the painting....turns out there are two other paintings under there! 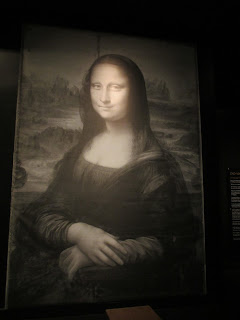 One of his inventions was a portable piano......perfect for Hubby! 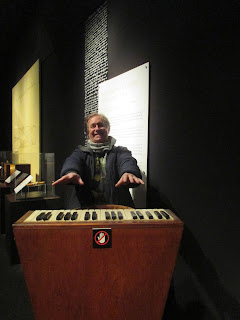 I found some of his quotes very interesting and perfect even in today's world. 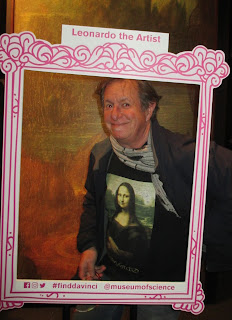 The only "hands-on" activity they had was using a model of a catapult to try and knock down a cardboard castle.  Hubby gives it a shot. 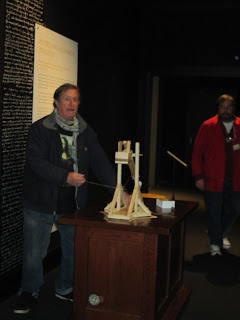 They also had a short commentary on another of Leonardo's famous paintings....the Last Supper 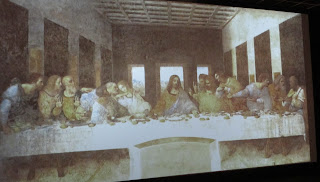 When we left the Museum of Science it had started to snow. The giant dinosaur out front looks a bit chilly! 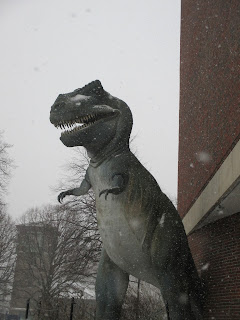 Waiting for the T to come 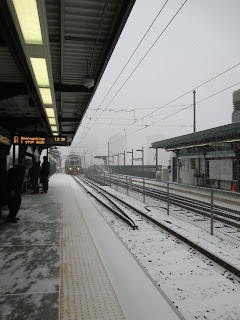 When we got to the Aquarium, the Sea Lion out front was basking in the snow coming down! 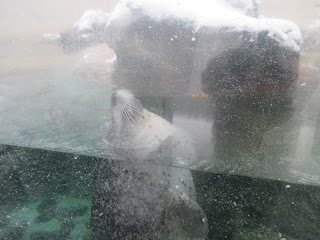 The Little Blue Penguins were gorgeous! 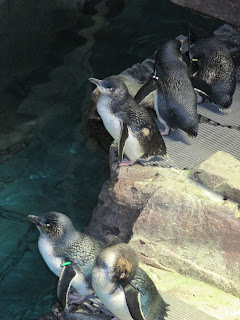 And the fish are just beautiful too! 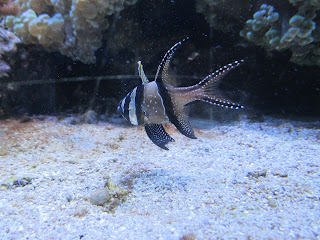 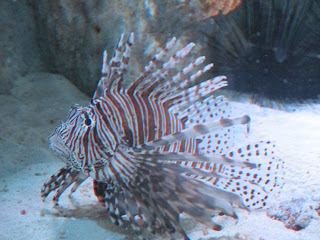 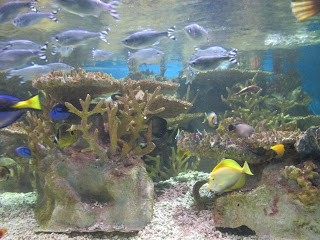 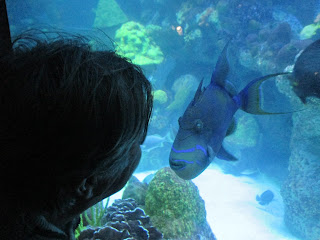 And I love patting the Manta Rays 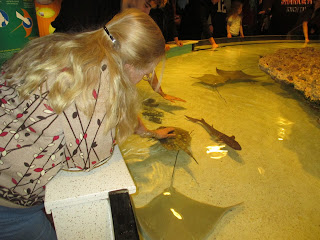 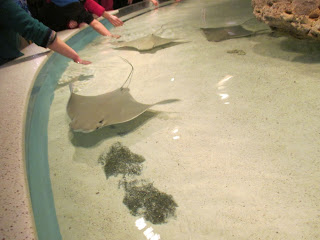 After the Aquarium we went back to the parking garage to retrieve our luggage.  It was like a scene from Seinfeld as we wandered around the parking garage looking for our car!    It was really only about 15 minutes before we found it.   The 1/4 mile walk from the garage to the hotel was brutal with the driving snow and wind.    When we got there, there was a wedding being held in the lobby! 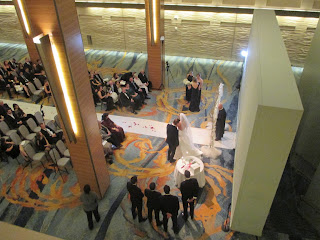 We had planned on going to the Cheesecake Factory for dinner.   With the terrible weather we thought twice, but since the T stop was literally right outside the hotel, and the stop at the other end was inside the Prudential building where the Cheesecake Factory was located......we figured it would be easy!   Despite having not one but two trains "go out of service" ...forcing us to get on another train, we got to our destination dry and warm.  And so happy that we made the decision to go!  The Chicken Madeira I ordered was the best I've ever tasted!

We woke up in the morning to beautiful blue skies!  But still extremely cold, so we ate a very expensive (but quite delicious!) breakfast in the hotel dining room.

The short walk back to the parking garage (where we once again had trouble finding our car!) yielded some photos of some very beautiful architecture. 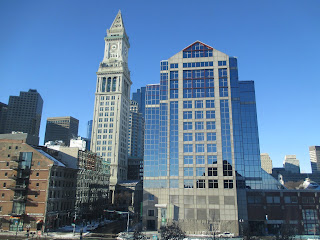 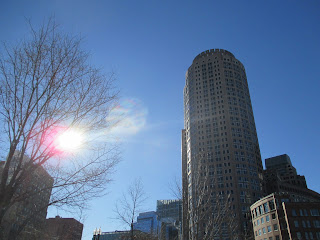 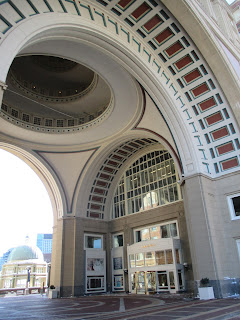 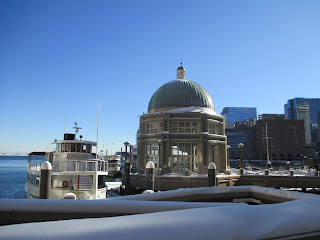 Finally, across the iconic Zakim Bridge to home 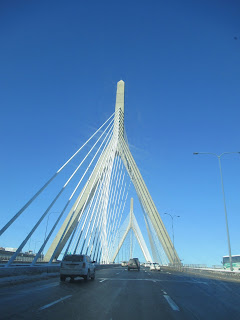